As we awoke and went to the windows facing the south I observed something that is reserved for extremely cold weather. The temperature was minus 16 degrees. When I saw this image, I said, now that is what I call "cold turkey". 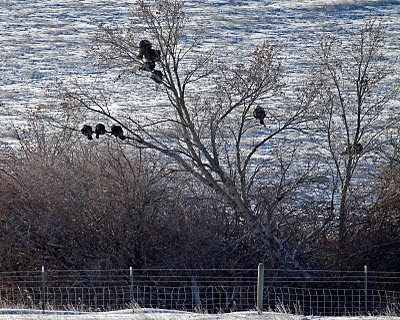 I knew I needed to get a closer image if you were to believe the creatures in the trees were really turkeys. It was too cold to walk toward them, so I approached them in the pick up truck and took a series of pictures. I was sure that if I got too close they would take flight and I would miss this opportunity. I was wrong. I got close enough to take the next 2 pictures which should convince you that it was cold and they had no intentions of leaving their perch, especially with the sun shining on them. 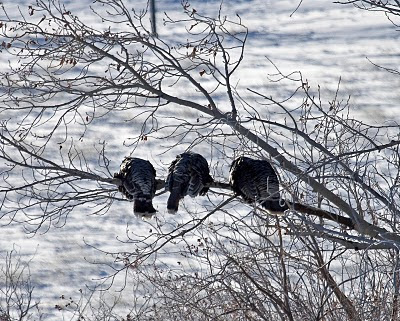 This flock of turkey's have been in a number of postings on our blog. Just yesterday they were in the foreground of the picture of the Grove Creek, on December 19th they had ventured away from the creek and were found near our house, and if you go back as far as November 19th, you will see this guy on a much warmer day. 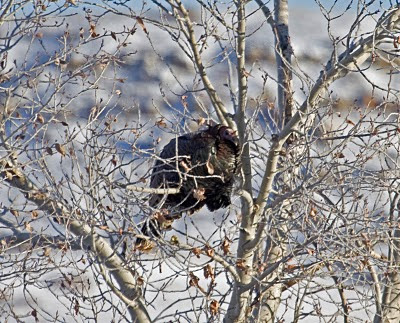 This is really, "cold turkey". I had to search the context of "cold turkey" to see if there was any correlation to my pictures. There were 2 phrases that I found which I believe are applicable.

"to immediatley and completely give up"

For a turkey to fly into a tree, 15 to 20 feet above the ground, they were giving up the cold ground and at 16 degrees below zero it was hazardous to their health. I also learned the term was used by humans in the context of giving up an addiction. I can relate to that as well as in June of 1980 after many prior attempts, I quit smoking, "cold turkey" and have not indulged since then.

On the other hand, I can assure you that the expression of "cold turkeys" will be used again at the Circle B Bar T Ranch the next time the temperature plummets to below zero.

It was minus 3 degrees last nite

Thought some of you would want an update on the weather. It did get cold,I didn't capture all of the images, but here are a couple plus some other items of interest. As you will see we did get some snow, not as much as the weatherman predicted, but at least 5 inches. The horses came to breakfast this morning with snow on their backs, the winter coats are so thick, the heat from their body never got to the snow to melt it.

I went to the Grove Creek to see if the owl was still in it's nest. Look hard, but it isn't there. 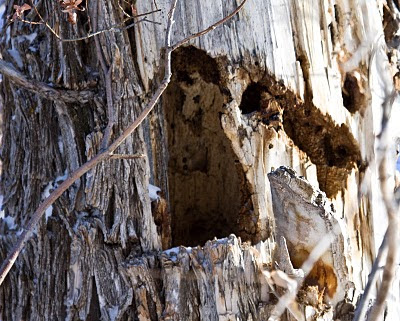 By the time I had walked to the Grove Creek and taken this picture, my camera was so cold, it would not function any more. I missed pictures of 2 golden eagles in the nearby trees, but I also found a pile of feathers at the base of one of the trees. They were turkey feathers, therefore, we are missing a turkey and some animal had their Thanksgiving - Christmas dinner in January.

I warmed up my camera and drove to Fishtail. On the way, I captured this picture to give you a feel of a post snow, cold sun shiny day in Montana. In the center of the picture is our place, approximately 2.5 miles from where I took the picture. The mountain range in the background is the Crazy Mountains, at least 60 miles north and west of here. They are just past Big Timber. 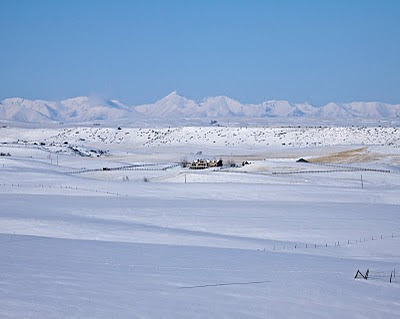 This mother deer and her 2 fawns were roaming in a wooded pasture as I approached Fishtail. Even thought the ground was covered with snow, they looked quite healthy and most likely had been snacking on the neighbors cattle hay. 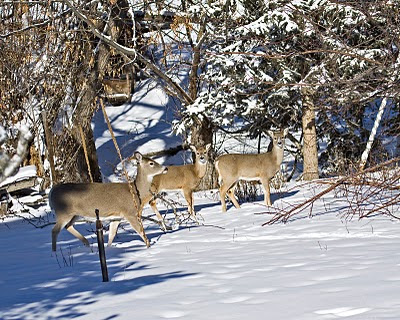 Winter is returning to the Circle B Bar T

In case you haven't read the weather report, we're due for another round of winter weather. In preparation, Clint filled the space next to the fireplace with plenty of wood. After the horses have been cared for, Marty and Clint snuggle up in front of the fireplace, read a book, get the latest from our friends on Facebook, Twitter, or your favorite spot. As you can see we're ready. 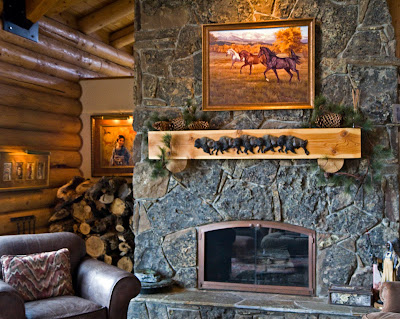 This will last for at least 5 days and maybe a week. But Clint is prepared, in anticipation of the cold and snow, he has just finished stockpiling another week to 10 days supply under the deck, next to the back door to the downstair's fireplace. We have options, upstairs or downstairs. 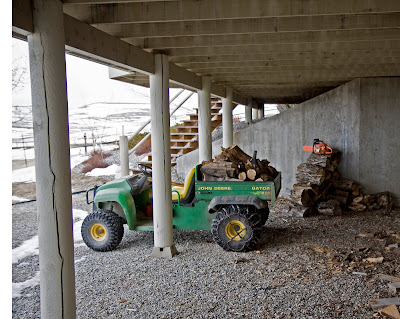 And you ask, where did all of this wood come from. It's only January and we have already burned thru at least 2 cords of wood, but fear not, there is a lot more where this came from. Yes, over the shoulder's of the turkeys there is an abundance of wood along the Grove Creek. Clint has been harvesting the older vegetation that voluntarily grows along the creek as well as an occasional tree that gets destroyed by the wind and weather. He hasn't made a dent in the opportunity. 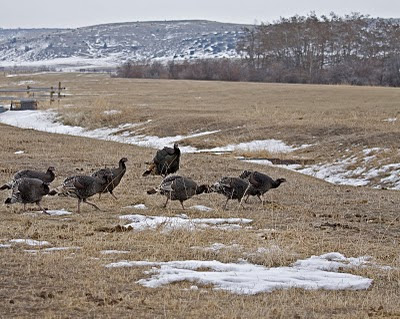 This is a close up of where Clint spends his days in the winter, as he did today, cutting the wood that you saw above in the back of the Gator and stacked along the wall under the deck. Clint spent close to 2 hours with the chainsaw, axe and wedge. This limb is obviously dead and will ultimately be on the ground where it is easier for cutting. 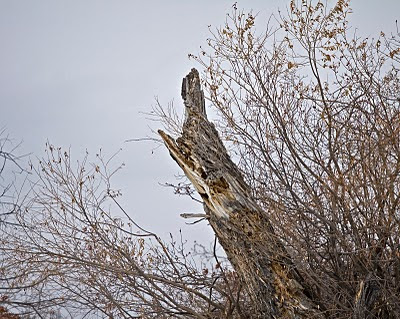 and now to test your eyesight. As Clint was leaving the Grove Creek with his second load of wood, after almost 2 hours of working and sawing (a lot of noise as well) he glanced around at the area only to see on the opposite side of this limb something that had been observing his actions. As soon as he got to the house, he grabbed his camera and returned to take this picture. 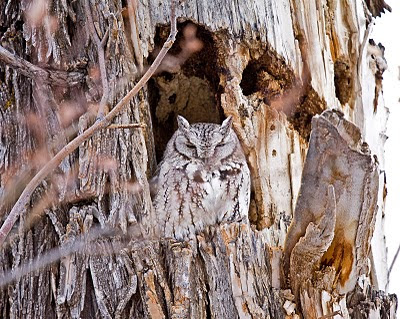 In case your eyesight has failed you, the owl that had been observing Clint's activities is nicely camoufloged in its nest.
Posted by Clint at 4:17 PM No comments: