Where did I take these pictures?

If you can determine within 250 miles of where I took these pictures, you could win a photograph. One of these or any photo that Clint has taken. All you have to do is send an e-mail to me at circlebbart@nemont.net and tell me where I took these pictures. We will recognize the winner and let them choose a photograph for the best answer. As you examine these 5 pictures you need to look at not only the subject but the surrounding area before you make an entry. The water, the landscape, and the potential area's. This is the first picture. It is a mallard duck, prim and proper. If you think a close up will help in your decision process, double click on the image for a close-up view. 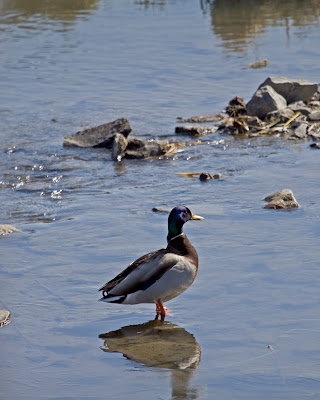 As I had completed taking a series of photographs, this being my favorite, I was fortunate to capture this guy as he tried to evade my camera. However, I was ready and I got him as he tried to escape. Yes, I was lucky, but this picture is as much a function of my new camera as it is the photographer. Luck enters the equation as well. Where do you suppose I was standing when I took this. 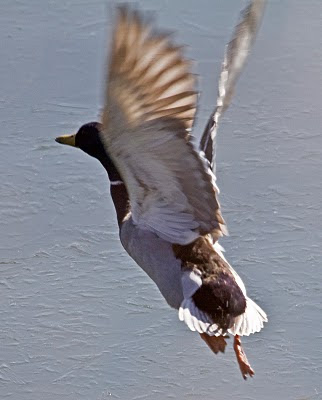 Do you have an idea where I took these pictures? Perhaps a picture of his girl friend and her surroundings will give you a hint. Does the color of the water give you a clue. It's too early for her to be on a nest or have ducklings, it's more like mating season. 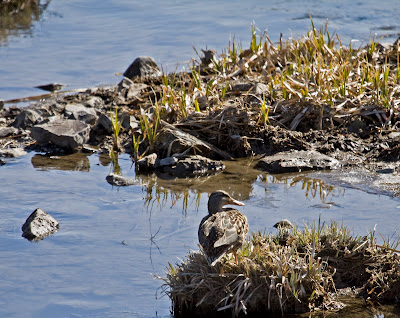 Okay, the next picture is a Meadowlark. It was taken the same day as I took the photographs of the mallards. It is quite obvious that this bird was sitting on a barbed wire fence, of which we have none on our property. Here's perhaps another hint, the Western Meadowlark is the state bird of 6 different states in the west. Could I have been in Oregon, maybe Kansas, or do you think maybe Nebraska, you say that is too far away, perhaps North Dakota, or Wyoming. The sixth state is Montana, but where you would find mallard ducks with the surroundings that you have seen in these pictures in Montana. 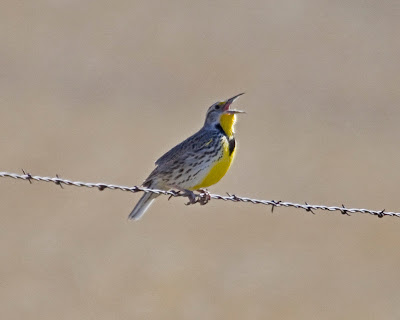 Well, I did have a lucky day wherever I was. Just as I had finished taking the pictures, the bird took off and I got it in the air. 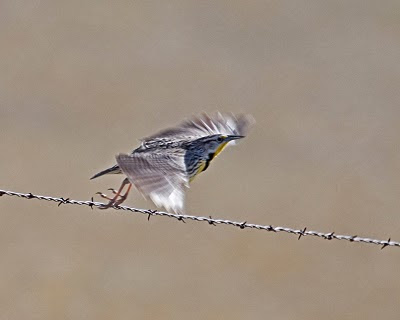 Now, study the 5 pictures carefully and send an e-mail with you best guess.
Posted by Clint at 8:22 PM No comments: