Over the past couple of years, Marty has been visiting the Crooked Creek Ranch near Lovell, Wyoming to participate in horse activities centering around Dressage and Eventing. Clint discovered that within a few miles of the Crooked Creek Ranch is the Pryor Mountain Wild Horse Range. So, he drops off Marty and the horses and heads to find some "wild horses". Memorial Day weekend was no exception. Marty, Wendy, and Johanna were involved with the horse events while Clint was hoping to find new places to see the wild horses. Although Clint took several hundred photos of the girls and other participants, the first 3 are of the Circle B Bar T gang. 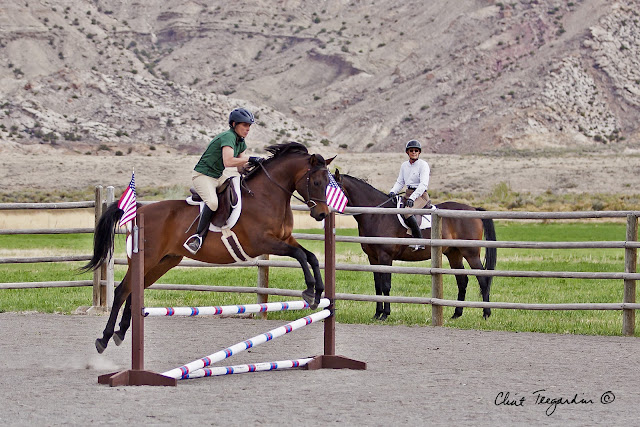 This is Grover with Wendy Bleacher riding and Johanna Kern observing. The last time you saw Grover he was jumping over a log in one of the Crooked Creek pastures with Marty aboard. This was taken in the enclosed arena where they were obviously jumping. 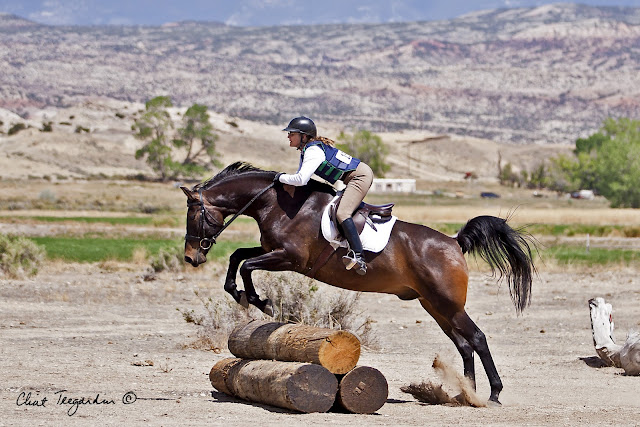 You may have seen some photographs of Quasar in the past. The big boy is now 17 hands was hopping over this pile of logs with no problems. Johanna is on board and everyone was pleased with their performance. Johanna and Quasar participated in the more advanced competition and they won. Wendy and Grover were third. 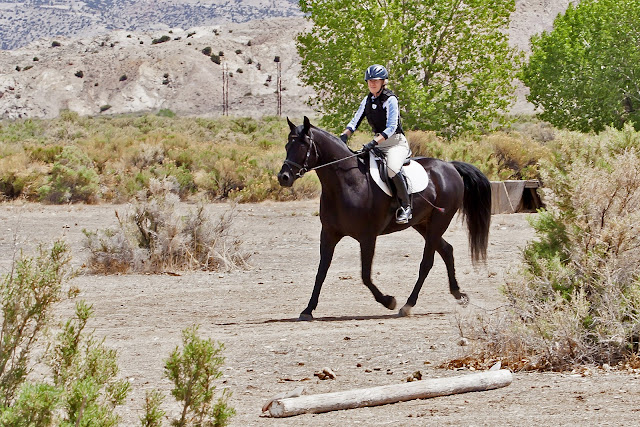 Marty has started to train with Majestic Dancer, better know around the ranch as "Doc". Since the 2 of them are just getting started, they were in the "grasshopper" class (beginners) and they did very well, winning the competition.

So the girls and their horses headed home not only proud of their rides but of their winnings as well. So what did Clint do.

He stopped at the visitors center in Lovell to get maps and an update as to where the bulk of the 100 plus wild horses were. The staff at the center gave Clint several ideas but told him he needed a high profile vehicle and 4 wheel drive if he wanted to go where the bulk of the wild horses were. Clint thought, no problem with his Dodge pick up truck.

Clint headed down a number of dirt roads with the maps he had been furnished. Each of the roads ultimately headed into the mountains along very narrow dirt roads and one by one Clint turned around before he got near the horses.

So. . . . . back to the area that he had been visiting on prior trips. After the first 2.5 hours he had seen no horses but did meet a couple from Colorado who have visited the wild horse range frequently. Clint decided to make one more tour of the range before he returned to Crooked Creek to photograph the activites there. Almost 12 miles into the range, the second time,  he spotted the couple from Colorado and it looked like they had found a horse. 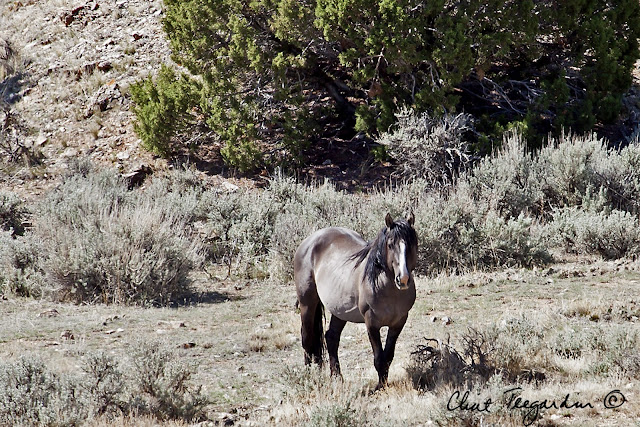 A beautiful gray stallion. Clint's new friends added something special. They were frequent enough visitors that they knew the horse by his name. It was Fiero. To prove this, when Clint got home he keyed in Fiero on the internet and found a very similar picture.  Clint's new friends, then asked if he had seen the welcoming committee at the south entrance. Clint said, you mean the Big Horn sheep. They said no, there are 2 stallions, Hickok and Jesse James and their girl friends that are always hanging around near the lake and the clump of trees as you enter.

After Clint had taken enough photos of Fiero, he headed back to Crooked Creek to catch up with those activities. But, guess what, as he neared the south entrance, who was standing near the road. 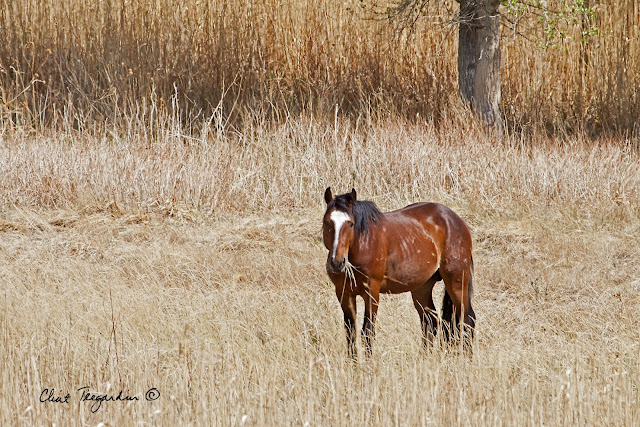 It was Jesse James. Yes, Clint found Jesse James on the internet as well.

Stay tuned as we visit the Pryor Mountain Wild Horse Range in the future and introduce you to more of the horses. Marty wants to be part of the next visit as well.