It's been a long dry spell

On May 25th we showed you photographs of a very wet spring at the Circle B Bar T and until just a week ago, we had no precipitation. However, the Davidson River is still flowing thru our property, I have had to rebuild 3 fences that were destroyed, and the water level in our well is the highest it's been since the well was dug in 1992. Another proof of the benefits of all of the rain in the spring is the fact that after we baled the hay for our horses, 35 tons, there was still 100 tons left which the neighbors took for their cattle. The photograph below shows just a few of the 200 large bales as they were being removed from one of our fields. You may also note the three rail fence in the foreground. This is just 4 sections of over 100 that Clint added to the fence on the ranch. 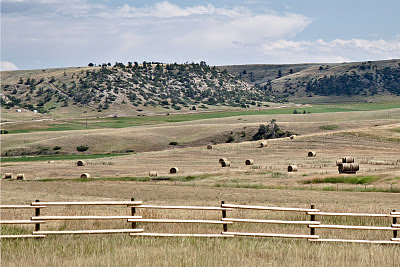 Well it's October and we finally got rain. Look what it did in the Beartooth Mountains. Yes, they are white again and there was enough that the Beartooth highway has been closed until next spring. 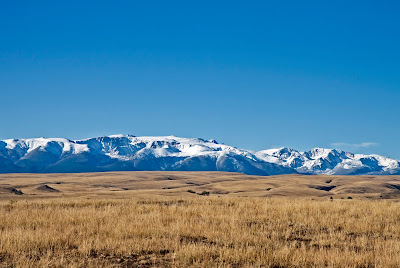 There are other sign's of fall besides the view of the snow in the mountains. Some of our wild life is returning south as a result of the longer days and colder weather. Others have started to return. We didn't see Magpies this summer but they are back. 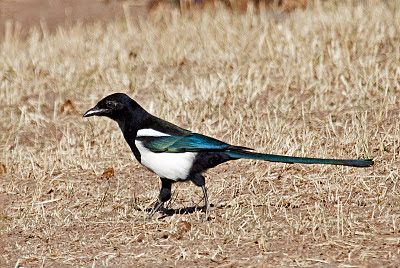 another bird has returned. Not sure if the availability of food was lacking, whether our neighbor has started feeding them again, or they just like it here at this time of the year. This is just one of 15 that are now grazing in the pasture next to the Grove Creek. 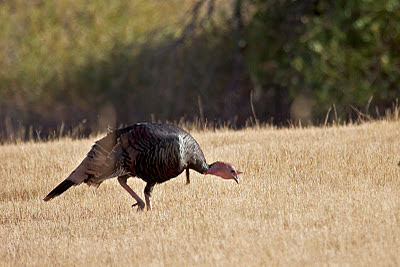 Speaking of birds, you are probably aware that one of my favorite birds is the "bluebird". Although in the past we were aware of the Moutain Bluebirds arrival, building nests and hatching a new family. This year was even more special than the past as the young bluebirds left their nest, they have spent the summer in the trees around our home. The next photograph has two of them sitting in a tree just off our deck. They could barely fly but they did make it to the tree and most likely back to their nest. 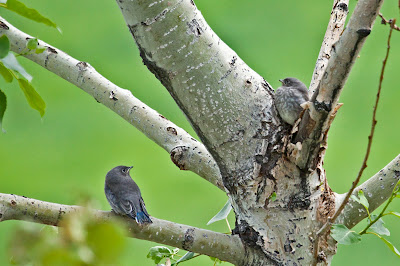 and just last week, I found one of them in another tree. They are growing up fast. We are hopeful that they will return here with their parents next year and bless us with their family. 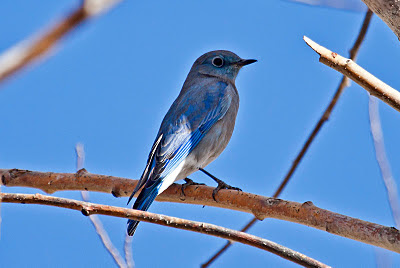 We plan to be in Yellowstone National Park in 3 weeks and hopefully we will have an update on the wildlife there to share with you.
Posted by Clint at 12:45 PM No comments: