Headlines: Stillwater County Montana News - "first 14 days of December were the second coldest on record with an average temperature of 7.9 degrees.

How did the cold weather and snowfall effect Marty, Clint and our neighbors?
Others didn't fare as well, the ground was covered with snow, it was difficult to find food.
The wild turkeys who have been scavaging the fields had to turn to alternative sources of food. They continually got closer to the house and barn. I took these pictures this week, and you can see from the second picture, they were re-cycling the oats and hay that the horses had consumed. 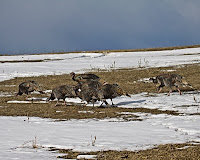 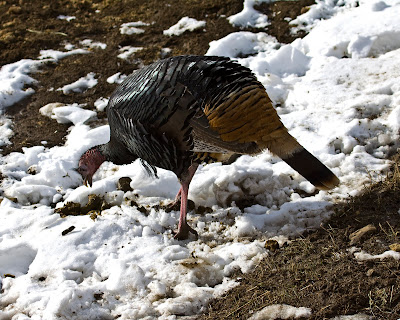 The deers who typically are foraging on what's left in the pastures were having a difficult time as well. The picture of the buck shows him in deep snow trying to eat what's above. The old dry grass was once described to me by a local rancher as the equivalent to card board. Then there was a very smart deer shown here, next to one of the neighbor's cattle hay, stacked and ready to be taken to the field. The hay was not protected by fence and this doe not only had been feasting on the hay but showed her enjoyment by licking her chops. 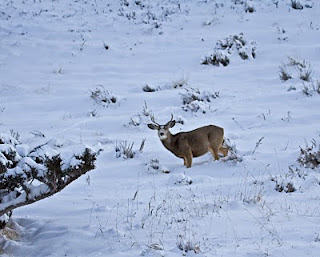 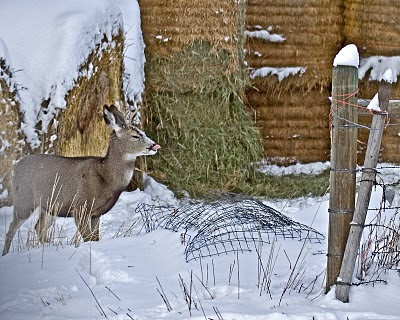 The rabbits are smarter than you think. This one was just next to our horse hay, obviously it was eating the better stuff as well. The jack rabbit was cuddled in the field when the dogs spotted it and was outrunning them when I captured this image. 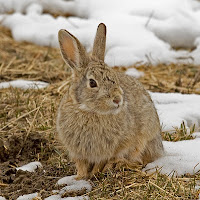 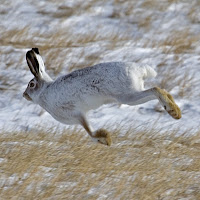 Diane Signoracci, our neighbor, called to ask if we had purchased some cattle as she saw a bull in our driveway. The answer was no, but it took several calls to other neighbors to find out who it belonged to. They asked if I would put the bull in the small pasture next to the house until they could get it returned to their herd. You could guess that perhaps the cows had eaten all of the hay and the bull got out of his pasture and was looking for more food. In the meantime, Kenya, our female dog, enjoyed chasing the bull in the pasture.

This is Kenya, she was not only watching the turkeys but she was looking to see if the bull had been removed from the pasture. She has obviously been fed well and it was more fun chasing the wildlife than cuddling up in the warm house. 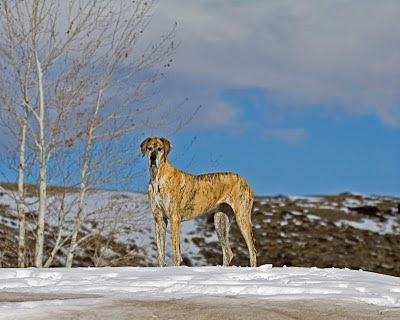 Hopefully, the winter storm that is settling on the east coast doesn't have a devastating effect on our friends who live there. Just put a fire in the fireplace, and enjoy the day, and sing the song, "We were dreaming of a white Christmas" and now we have one.

Marty and Clint have already gone thru at least 2 cords of wood since it got cold. The Christmas music is playing, the animals have been fed, and they have a fire in their fireplace.
Merry Christmas
Posted by Clint at 10:36 AM 1 comment: