As you can see by the first photograph, there was snow in the mountains in Yellowstone. It was also cold. The lower elevations showed just a trace of snow but the upper elevations had plenty of snow. We were hopeful we would spot some bears before we left but they must have been testing their winter habitat or were there til spring. 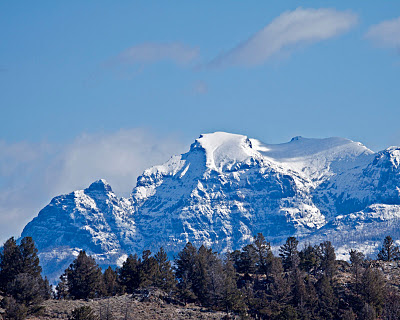 Before we even entered the park outside of Gardiner we spotted the first male elk. He and one we found in Mammoth Hot Springs appeared to be either enjoying the sun, were tired from perhaps breeding activity, were resting for more vigorous activity, or were just plain lazy. This one was obvious asleep and it was early in the morning. 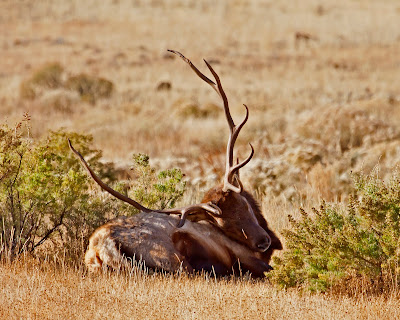 We traveled east to Cooke City where the town had already prepared for the snow and winter. A number of the shops were closed but there was not enough snow to attract the snow mobilers. We returned thru Mammoth to see this guy had joined the girls in the city. He like the first one was in a very relaxed position. Could it be that these 2 guys lost the battle for breeding rights and are waiting for next year. 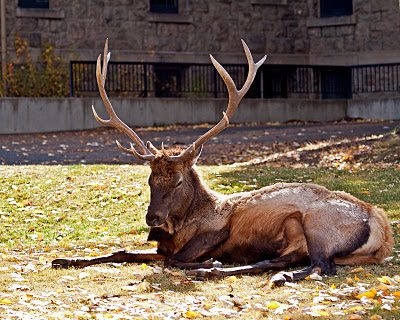 Oh yes, the big horn sheep were in the hills between Gardiner and Mammoth Hot Springs. This gentleman was sporting quite a herd of ladies. He could have claimed, "king of the hill", based on his position in the landscape. 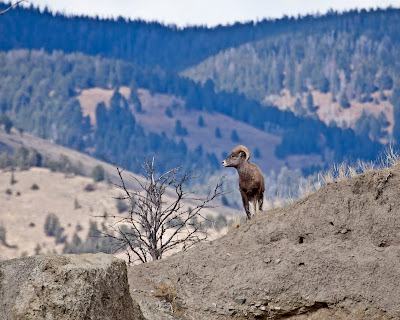 Did we see any bison? You know you can count on that. I wanted to comment on the bison, but not this one. As we were heading west past the Tower Falls junction we happened upon a herd of bison on the road. What made this spectacular was the fact that we had our 2 great danes on their second trip with us to Yellowstone and they were enthralled with the bison. These 2 young danes were out of control and I didn't dare open the window to the car or step outside. Although it would have been a great photograph to see how the herd had traffic backed up on both sides but safety was our first concern, so you'll just have to imagine the image. 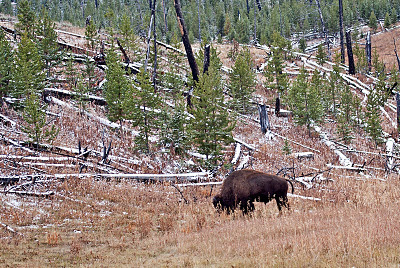 Were there any canines? On a previous trip through the park this year we had the opportunity to see 5 of the young wolves that are now resident in the Lamar Valley. We are always hopeful that we'll see them again. However the first sighting of canines was this young coyote that drifted across the road in front of us. 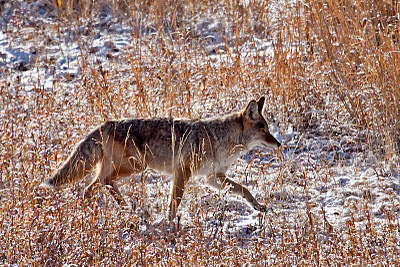 and then it happened on our return from Cooke City. In the Lamar Valley there were a number of cars and people with spotting scopes looking to the south. I was hopeful that it might be a bear so I stopped and asked what they were looking at. They said, it was the Lamar wolves on a carcass. I looked through their scopes and could barely see the wolves as they were so far away. Similar to what I have done in the past, I said to my wife, "let's go, we're not going to get close enough to take a good photograph". These people have been here for several hours and the wolves are not near as close as they were earlier in the year.
We had hardly started down the road when guess what walked out on the road in front of us. We followed it until I could get out of the car and start taking pictures. Yes, it was the closest that I had been to a Lamar wolf since I found Casanova, #302, in a very similar situation almost 4 years ago. This is my favorite image of those that I captured. 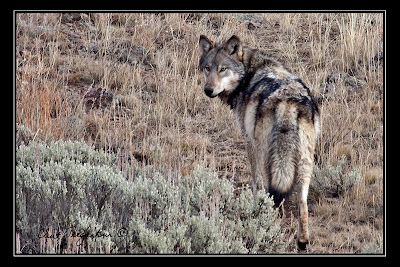 When I got home and started reviewing the images from our trip, I realized that this wolf had been with the others feasting on the carcass when we passed through that area 2 hours before. It must have gotten it's fill and perhaps was heading back to the hillside to feed the younger wolves.
I hope we don't have to wait another 4 years to get this close to another wolf.
Posted by Clint at 3:41 PM 2 comments: