Wildlife in the Winter

We have just returned from a drive through our part of Montana as well as a day in Yellowstone National Park. We started with snow on the ground, temperatures in the teens and twenties during the day, and the shortest days of the year. What does that mean to the wildlife?

First of all there are no bears as they are hibernating. Those animals that spend the warmer seasons in the higher altitudes have migrated out of the mountain peaks and into areas where there is a better possibility of grazing. Mating season is mostly over by now with the exception of the wolves and coyotes.

So . . . . . what did we see? The buffalo or bison were everywhere and you know what they look like. The snow wasn't deep enough to create a great obstacle for them to graze below the snow, they had already mated, so they were just surviving the winter.

However, the bighorn sheep are at much lower elevations. There were lots of them to see including this year's crop of babies. A few of the boys were still making love to the girls as seen in this photograph. 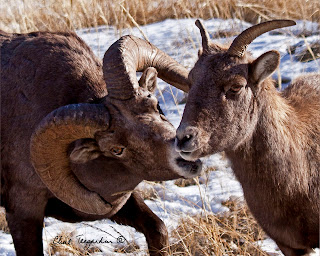 This big guy was more intent on eating than posing for my camera, so here he is scrounging for something to eat. His body shows no ill effect from the lack of lush grazing. 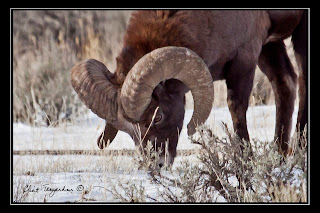 The pronghorns (antelopes) have had problems traveling to new destinations in the winter time as more ranch type fences keep them from migrating.  We did take a back road in the Gardiner area and saw more pronghorns than we have seen in a long time.  This one had wandered off the the herd . . . . . 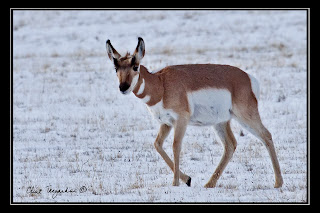 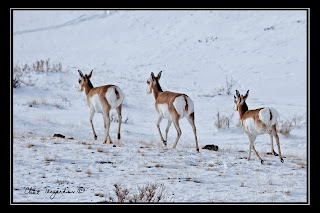 Yes, we did see a coyote, at first it was just posing for this photograph 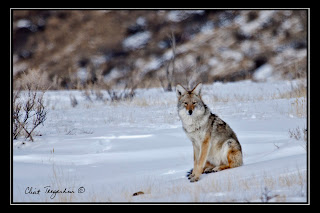 and then it decided to wander away from the photographer 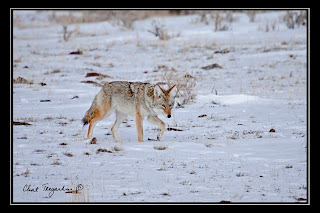 and finally, we did find a male elk huddling in a ditch. For those who are impressed by antlers, this guy is a winner. 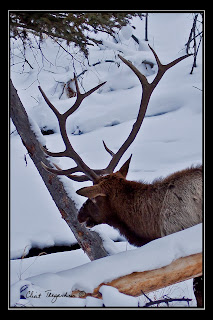 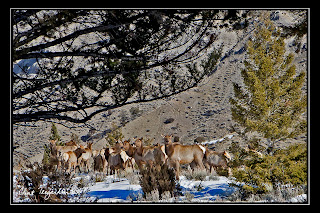 We have plans to return to Yellowstone in January, February, and March along with an overnight stay at our favorite resort, Chico Hot Springs. Stay tuned and see what we find next.