Clint needs to get better

As I was traveling toward Fishtail yesterday with my camera by my side, I saw at least a 5 foot snake crossing the road. I had the wrong lens on the camera and by the time I had the correct lens, the snake was gone. I got out of the truck, walked through the grass and couldn't find. That's when I found the sheep and the spurge that I talked about yesterday.

After stopping at the General Store, the dump, the lumber company, the bank, the post office, and the IGA, I started down the Stillwater toward the Grove Creek. I spotted a female deer, stopped the truck and with my 400mm zoom lens I took its picture. Not until I saw the picture close up on the computer, did I realize it was not a doe about to have a fawn or perhaps a doe with a fawn. I was too far away to tell when I took the picture.

It is the time of year for the female deer to start having their babies. They usually separate themselves from the rest of the herd to have their baby, that's why I thought I might have found one. Sooner or later, you'll see a picture of a doe with her fawn. 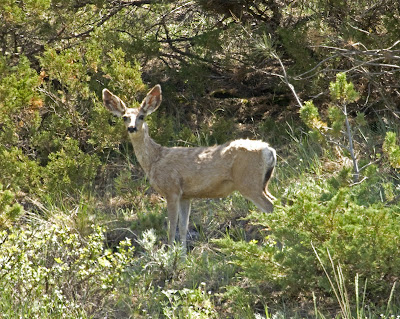 The Spurge is back

Leafy spurge is a weed in Stillwater County, Montana and most other places where it grows wild. It has a very deep tap root, 20 to 30 feet deep, the sap is like latex, and uncontrolled, it will take over your property. Less than a mile from where these pictures were taken, a rancher once lost his ranch because he said, I ain't never going to have sheep on my ranch, I'm a cattleman. The spurge took over and he lost his ranch. How is it controlled. Sheep eat it, it has between 35-40% protein, so it's great feed. There is a spurge beetle that is available to the ranchers in early July. This is the only other way to control the weed. Originally it was imported from Russia as an ornamental plant.

The first picture tells the story. This neighbor has turned his sheep onto the county road to eat the leafy spurge. It is the yellowish green looking plant in the pictures. The county can't control it with weed spray, so let the sheep loose. The second picture is part of the flock as they move down the road, grazing on the spurge, and the final picture is one of a mother and her lamb, the mother's mouth full of spurge and the lamb enjoying the day.

The Johnson Place which is the 5000 acre ranch to the south of ours is loaded with spurge. The semi's have been arriving for several days and ultimately there will be at least 3000 sheep there for the summer. Yes, in case you are wondering, we have spurge on our property also.
DOUBLE CLICK ON THE IMAGES AND YOU"LL SEE THE SPURGE 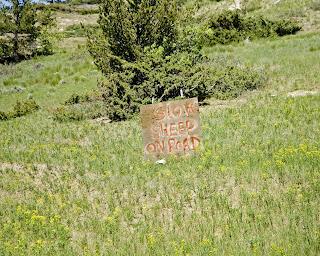 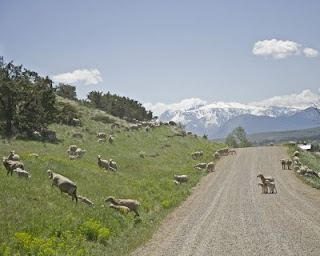 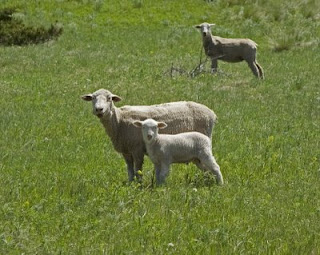 A sale was consummated for Rafiki. Needless to say as he was loaded in the new owners trailer a lot of tears were shed, but they were tears of happiness, as his new owner, Gayle Wold, from Helena was a much like Marty as Marty, what a great owner and wonderful new home for Rafiki. 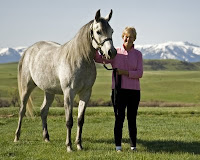 Quasar, a 2 year old son of Toby's out of a warm blood mare arrived at the Circle B Bar T the next day. He spent the first day with Doc and then they joined the rest of the horses in the pasture. Quasar was readily accepted in spite of his young age and size. He will easily mature to 17 hands and is already the largest horse on the ranch. Marty went into the pasture the next day to see how they were doing. As the horses saw Marty, they came galloping from the furthest point of the pasture toward the barn. They had to go thru a gate to get there. It appeared it might get crowded at the gate, how would they all fit through at the same time. No problem, Quasar just jumped the fence. HE WILL BE A GREAT JUMPER based on this experience. 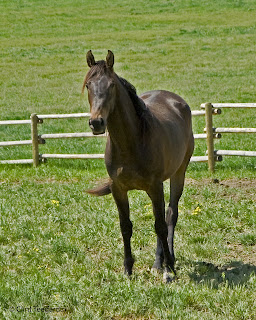