2 days in Yellowstone National Park in the winter is always interesting. the evening before we ventured into the park we had a snow storm in Yellowstone as well as Fishtail. There was from 15 to 25 inches of snow across the region. The road crews had been busy but there was no problem getting to the park and then driving through it. The bison that were moving found it easier on the road than in the meadows. As the sun started to shine through there were some spectacular views on Yellowstone. Entering the Lamar Valley we saw shadows of the landscape and in this photograph the trees. 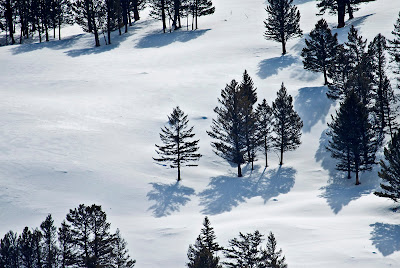 With this much snow, everything was pristine and there had not been time for the wildlife to put tracks in most of the snow. I stopped to take a photograph of one of the peaks which is very ordinary most of the year. But this was different. What you will observe is the crest and only the crest of a mountain that is at least 9000 feet high. 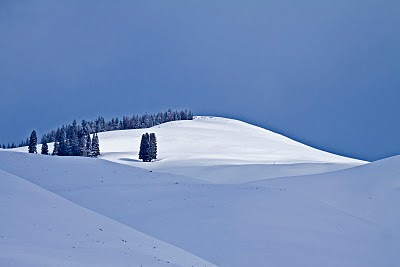 We decided to drive the entire 50 miles across the northern route to Cooke City in hopes of seeing something other than bison. In case you want to see Bison, go to the blog of our January trip. We hoped to see a moose, but all we saw was snow and it Cooke City it was pilled at least 10 feet high or higher. On our return we spotted some elk. This young lady was sneaking some food from under this bush when I snapped the picture. She was one of at least 50 who had found a place near the river that didn't have much snow. 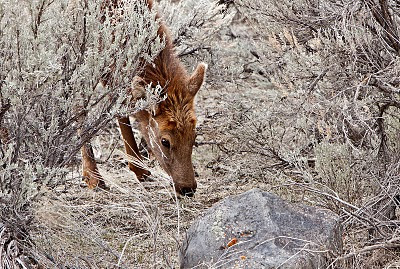 The second day as we entered the park, I said to Marty, I hope we get to see a coyote or fox before the day is over. Of course there were a lot of bison and we also saw some big horn sheep and a couple elk with huge racks. We were in the Lamar Valley, just before the Soda Butte when we saw several cars and people with spotting scopes looking up the mountain to the north. As we slowed down we spotted 5 wolves, the Lamar pack, running toward the road. 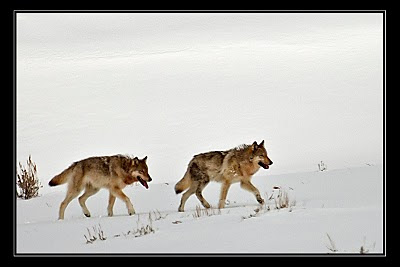 We had never seen wolves running so fast and howling so loud. It wasn't until later that we discovered what had happened earlier in the day. As they approached the road they suddenly turned in an eastern direction. I soon had to drive the car toward them as they became out of range of the camera. We also observed that they were having fun. These two were wrestling. 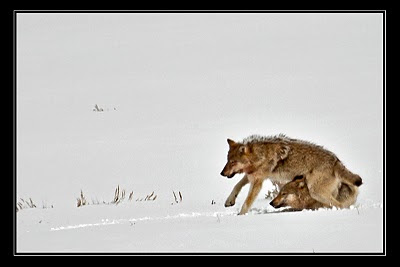 They were having a ball. Running, jumping, chasing each other. The howling was loud and these 2 were sparring. 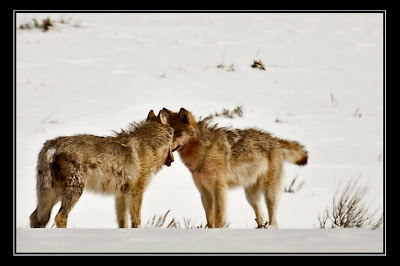 They soon turned around and I had to move the car again. They returned to the spot at the bottom of the mountain where we first saw them and started back up from where they came. What was going on? Earlier in the day, they had attached and killed an elk. They then had breakfast and took a nap. I can only assume with all that nutrition they were full of vim and vigor and decided to have some fun. Yes, lets run down the mountain and when they saw the crowd with the spotting scopes they turned to the east and when they got tired and the fun was over, they returned to the spot up the mountain. 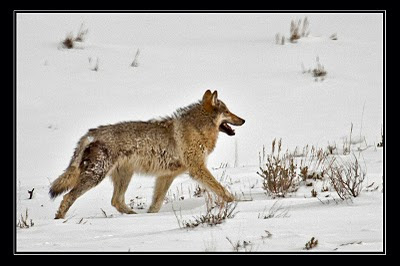 This was a rare occassion. We have not seen wolves in Yellowstone for a least a couple years. We have never seem them this active. The hour we spent watching them made our trip. We ventured on to Cooke City in hopes of seeing a moose. Not this time.

By the way, we didn't see any grizzlys either. If I was one of them and saw all the snow, I would have crawled back in my den until it got warmer and the snow had melted. We have plans to return in May and June. By then there should be some youngsters running around and the snow will be off the roads so we can see the entire park.
Posted by Clint at 1:11 PM No comments: