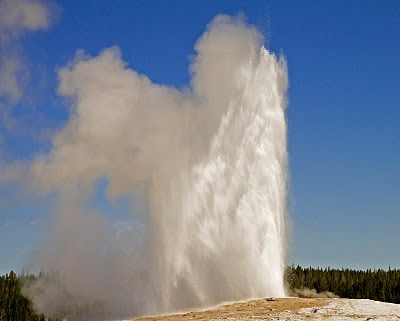 and if someone asked you what was the next most identifiable part of the park, and you didn't answer, bison, bears, wolves, and elk, it probably would be the Grand Canyon and the Canyon Falls. 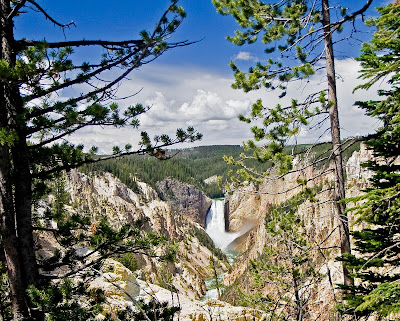 Having owned property just 35 miles from the park for almost 20 years, Marty and I have been frequent visitors, we've done most of the things that can be done and have seen most of the places and things to be seen. However, things have changed since our July 8th visit. Marty purchased the Yellowstone Expedition Guide at the Yellowstone Association store in Gardiner. Since then, and 2 visits later things have changed. The guide is almost 300 pages long and includes a CD featuring 14 narratives about Yellowstone. The guide has been our companion for the last 2 trips, this is what it looks like, and if you are coming to Yellowstone, stop by one of the Yellowstone Association stores and get a copy, it will be well worth it. 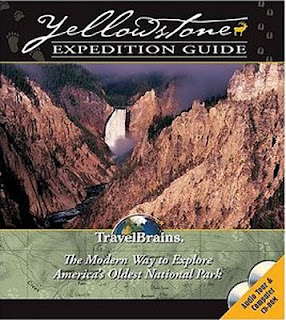 Here are a couple examples of how it has changed our touring of the park. Typically we would enter either at Cooke City or Gardiner, we never missed the Lamar Valley and depending upon the amount of time we have to tour, we would see most or all of the park. But this is how things have changed. We had just left the Canyon area when Marty said to look for LeHardy's Rapids. The "most exciting rapids" in the park where native cutthroat trout leap over the rapids on their way to spawning. We have passed the rapids at least 50 times, never stopping, but this day we did. The trout had already made the trip to their spawning grounds, but look what we saw at the rapids. That's right, pelicans. They were fishing the rapids and after a tough trip through them, they would rest on this island. 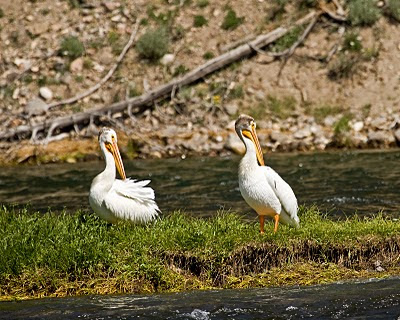 As we started down the road to "artists point" for the classic view you have already seen, Marty said we should stop at Uncle Tom's Trail. So what is that I asked? It is a trail that originated in 1898 along the falls. Today it is known as the 328 steps down to the base of the falls and it feels like 2,ooo steps up to where you parked your car. We did the trip, had to make several stops on the way back to rest. The scene was beautiful and exciting. This was a photograph taken close to the bottom of the falls. 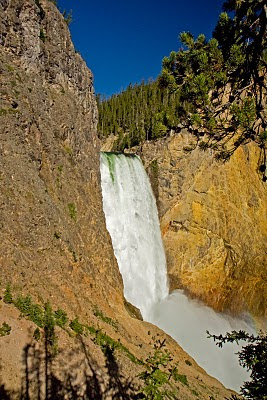 Old Faithful was next. We've been there many times as well, and as usual I was trying to get there as soon as I could to be sure we would see the next eruption of Old Faithful. Not so fast Clint, slow down and turn into the Firehole Lake Drive. What's there? I don't think it's a short cut to the geyser. No, but there are a couple of well know geyers there. The Great Fountain Geyser was first and the White Dome Geyser was next. Total drive was 5 miles, a another part of the scenic park we had missed for 19 years. 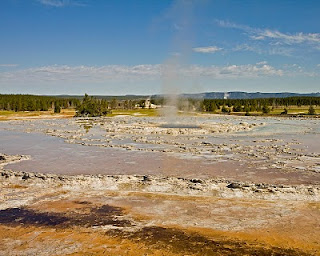 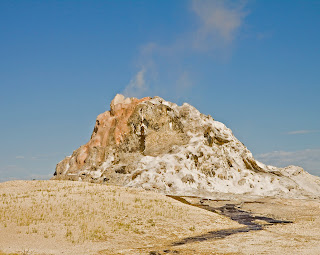 The day we purchased the guide, we had been in Lamar Valley, and observed an osprey sitting on a nest. With my tripod and camera, I intermittently hiked and took pictures until I though I was about to disturb the female on her nest. When I got home, I tried to make something out of the photos, you knew they were ospreys, the old man was in the background and out of focus, and I could not see any young osprey in the nests. Two weeks later, we returned and I was determined to get a better picture. We started across the field and within 5 steps from the car, mama osprey left the nest. 10 days later, we're back on the scene. This time I got the pictures I had been hoping for. I didn't know until I got home and put the images on the computer that there were 2 youngsters and they looked large enough to soon leave the nest with mom. 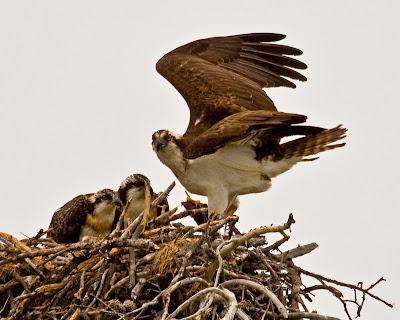 I'm sure you will hear more about what we've learned and new experiences as we plan to visit the park again in about a month.
Posted by Clint at 1:17 PM No comments: