As we normally do, when we arrived in Mammoth Hot Springs on October 14th, we went west toward Lamar Valley. As we entered the Lamar Valley, we were first surprized to see no snow, after leaving the other side of the mountains with still a lot left from the 2 feet we had accumulated in the past week. The temperature was warmer also. The next scene was not unusual for Lamar.

An accumulation of cars, people, and spotting scopes centered around Rick McIntyre, the wolf researcher who you know is there because of the yellow jeep. In addition the were cars and scopes scattered along the road, a real crowd. We parked the car and approached the crowd to find out what was the attraction. We anticipated wolves, but we also got a surprize. 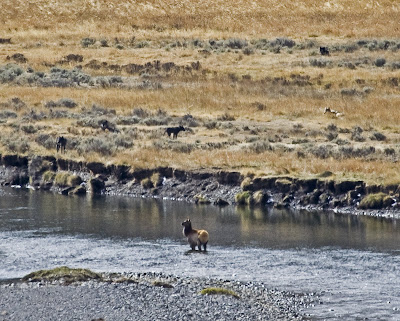 In the middle of the Lamar River was a female elk, and as you can see in the picture, 5 of 9 wolves were resting and watching. Earlier in the day, the wolves had chased the elk, were in the water with her, but ultimately got tired and headed for the shore. Elk wins round one. We took this picture and drove on to Cooke City and returned to see what was happening. Nothing had changed. The elk had now been in the river for 6 hours, and we were sure the water was very cold. When it appeared nothing was going to happen soon and not wanting to observe a massacre, we drove on. We decided to return the next day to find the results of the stand-off.

Another surprize, as we approached the location of the spotting scopes and crowd from the 14th, there was only 2 cards, no Rick McIntyre. Two men from Boise, Idaho were there and soon a lady from Virginia arrived. They related that as darkness approached on the 14th, the wolves gave up and slowly but surely wandered away. As they left, the elf escaped and left the scene. Elk 2 Wolves 0. Marty and I drove on to the Soda Butte, we saw no more wolves, and turned around for the 40 mile drive to Mammoth Hot Springs.

As we were driving thru Lamar, Marty spotted, not one but several coyotes hunting for dinner. I wasn't quick enough to get them in the air as they jumped on the their prey, but I did capture this one after it had swallowd a mouthful of something. 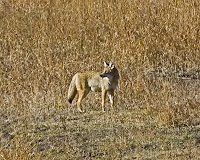 Two great days in Yellowstone and 2 nites at Chico Hot Springs. We had left Mammoth and were headed to Gardiner for our trip home. As we turned a corner going down the steep incline what appeared in the front of the car but . . . . . . . 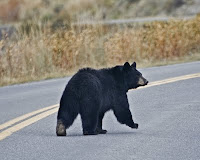 yes, it had been 2 above zero the week before, you would have thought it was time for hibernation, but it must have been out looking for one of it's final meals before the long winter nap. It stayed in the road until an approaching car caused it to climb the mountain to our right when I captured this picture just before it left. 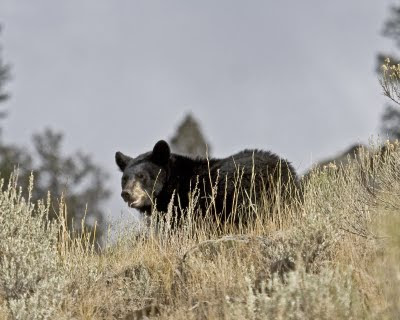 This was at least our 100th trip to Yellowstone, and just as wonderful now as it was on our first trip. If you haven't seen the PBS special on our national parks, be sure to do so.
Posted by Clint at 10:37 AM No comments: