Kayak Jack will be going to college this fall 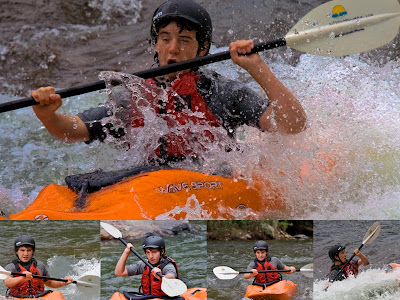 This is our grandson, Jack Teegardin, a resident of Boulder, Colorado. Several years ago, after spending many years and hours on the ice in a hockey rink, he migrated to another water sport as illustrated in the picture. As you can see from these pictures, he loves the sport and has become a very accomplished "kayaker".

In the past month, we received an e-mail from him that he had been accepted at Montana State University in Bozeman and more recently his father, Jeff, advised me that he has been offered a fairly substantial scholarship as well. As the decision time for selecting a school draws near, he will be joined by his mother and father on a trip to Montana to visit Bozeman and determine if he is a fit with the "Bobcats".

As Marty and I have told our friends that there is a possibility of Jack being a student in our great state, each and everyone has started talking about the rivers where Jack could kayak, ski slopes where he could speed down the slopes, and have told us at length what a wonderful school MSU in Bozeman is. If you knew Jack, you know that Montana State is not his only option

We all know that this is the first big step in your future. The pressure to make the right decision may be overwhelming at times, but we can all assure Jack that there will be much more difficult decisions in his future. We have all been in his shoes, we have all survived, and the dedication that he has shown to those that he loves and the things that are important to him will prove that this next big decision is the correct one.
Posted by Clint at 5:08 PM 1 comment: