How times change. The first weekend of October, 2008 we experienced 42 inches of snow at the Circle B Bar T. The same weekend in October, 2009 we had 24 inches of snow. This year, 2010, the same weekend in October the temperature was 83 degrees. This fall has been especially mild, the leaves on the trees was not hampered by the weather, and they were beautiful. It changed on November 18th. It got cold, the snow started arriving, and the expression of "cold turkey" took a new meaning the morning of November 20th. This is a picture of the trees along the Grove Creek. The dark images at the top of the trees is the flock of turkeys you saw in our last post on this blog. This time, it was too cold to be on the ground, so they flew to the top of these 40 and 50' tall trees. This is "cold turkey". 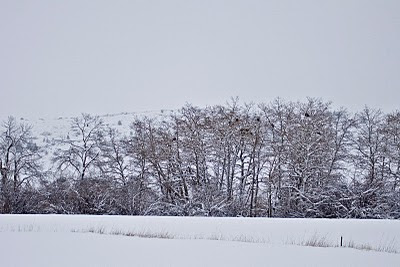 After taking this photograph, I decided to drive around the Fishtail - Absarokee area and observe was else was happening. As I said already, it had been a great fall, the livestock had not been feed hay as the pastures were still very attractive to both the ranch livestock as well as the deer. On this day, with over 8 inches of snow on the ground, and still falling, I fed our horses hay for the first time this fall. 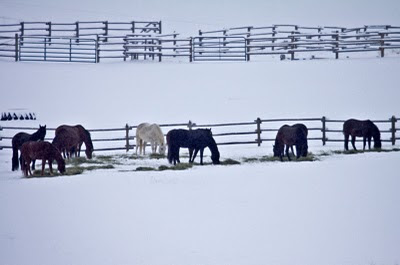 They weren't the only animals that needed to find something to eat. As I drove the 20 mile circumference, I expected to see lots of deer in the fields. I must have been too cold for them as well. I would normally expect to see at least 200 deer on this trip, but this day there were only a few, and the ones I saw had found something to eat, as this one had. 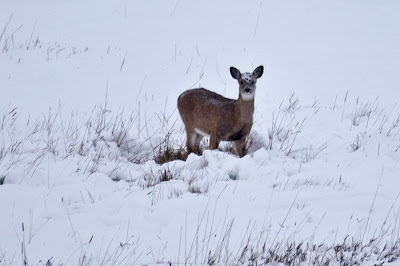 Most of the ranchers had been out feeding their livestock, prior to me venturing around south Stillwater County. However, this herd had not been blessed with hay and as you can see they were roaming through the pasture looking for something to eat. 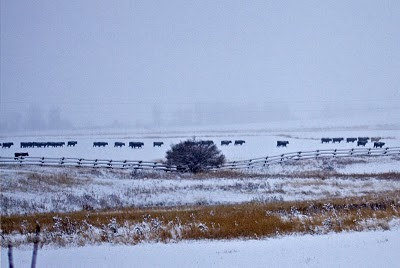 But these sheep, covered with snow, if you look carefully, were fillng their stomachs with hay that had been harvested this past summer. 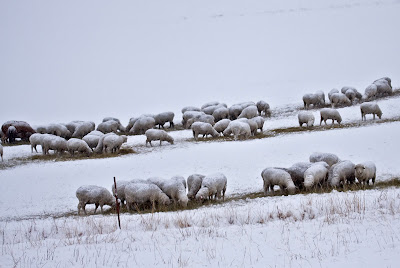 and finally, there were adventuresome animals like these who didn't wait for the rancher to bring them hay, they sought it out on their own. Whether it was the smell of the nearby bales or this bale just happened to be in the right place at the right time, and they went no further. They might say they were luckier that cattle you observed looking for hay, certainly they got their bellies full.
If you made this same trip today, there was hay in every field and every animal in our area was feasting on some good hay as the temperature had tumbled to minus 10 degrees last night. The weather forecast indicates it will not get warmed until Thanksgiving. In the meantime, there is more than enough excellent hay for our livestock to make the transition to winter. 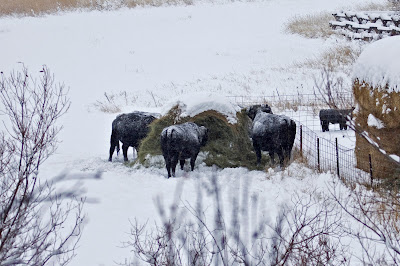