Spring has sprung and Yellowstone National Park was evident in every aspect of our trip through the park. Our past winter has left it's impressions as well. There is still plenty of snow in the higher elevations and more water in many of the ponds that have typically had little or no water in them.

One of the more prevalent sightings has been of bears. Although we were not close enough to photograph any of the very young bears, we did see a lot. In total we saw over 10 different bears in different locations and there were lots of visitors with their spotting scopes, either watching or waiting for the next bear to show up.

This bear was near Tower Junction along with several more that were farther away or were hiding behind trees around the Tower. 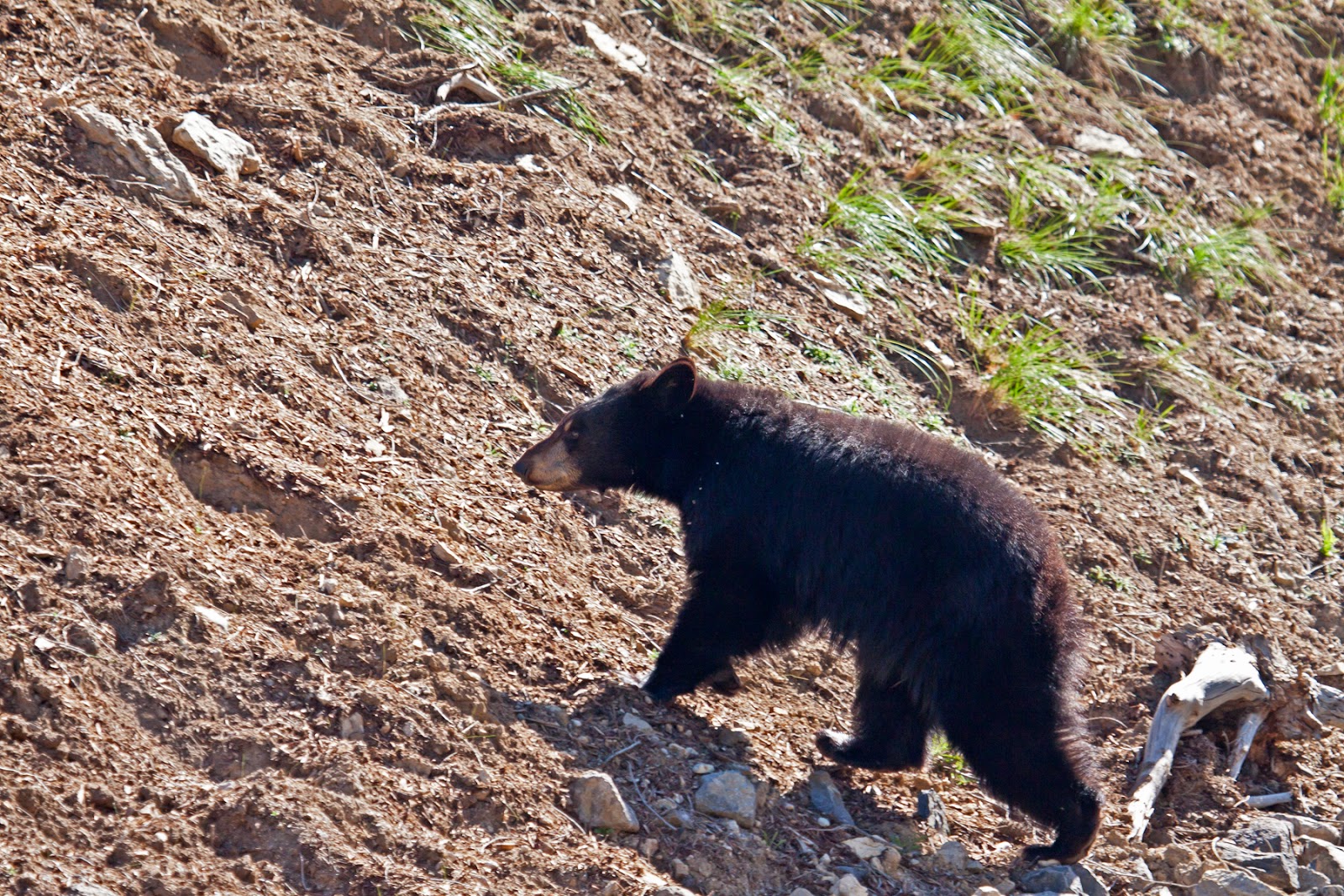 The next series of photographs were of pronghorns (antelopes). These two guys were having a great day as they were either enjoying the beautiful sun and weather, actively playing with each other, or sparing for leadership. This tells the story of what we saw. 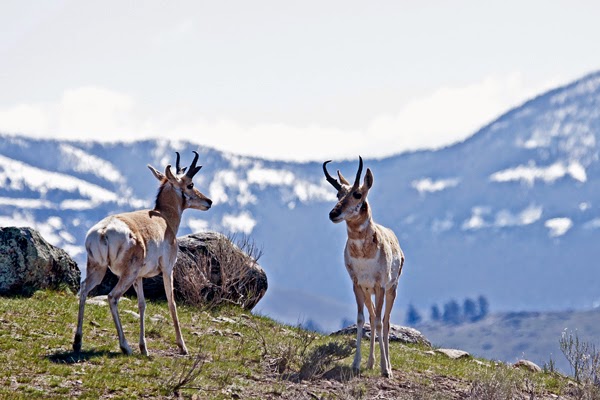 So you think you are the boss, or do you think I will put up with you any longer, or my girl friend told me about you and I'm ready for the challenge. They guys were alternately sparing, dancing or trying to stare down the other. We had never seen such activity among 2 pronghorns. We labelled the next photograph, "watch out, I'm on my way" to determine who really is boss. 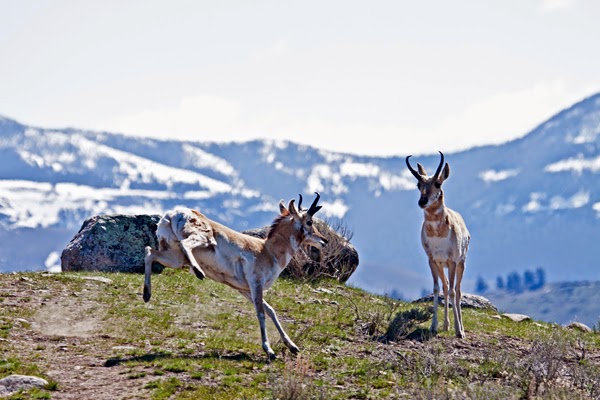 and then another battle began. 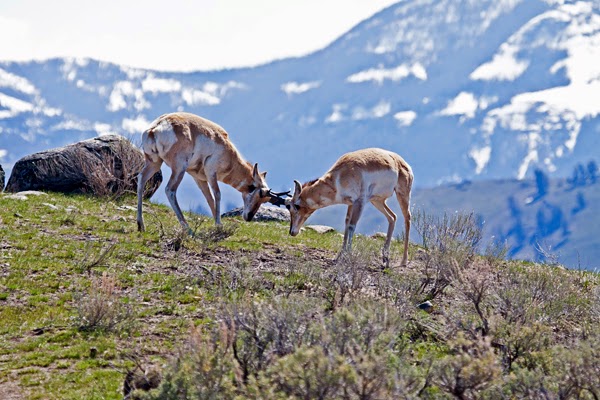 and they were still playing or fighting as we left the scene.

Did we see any wolves?  No, but as were traveling through the Lamar Valley, this coyote crossed the road ahead of us. 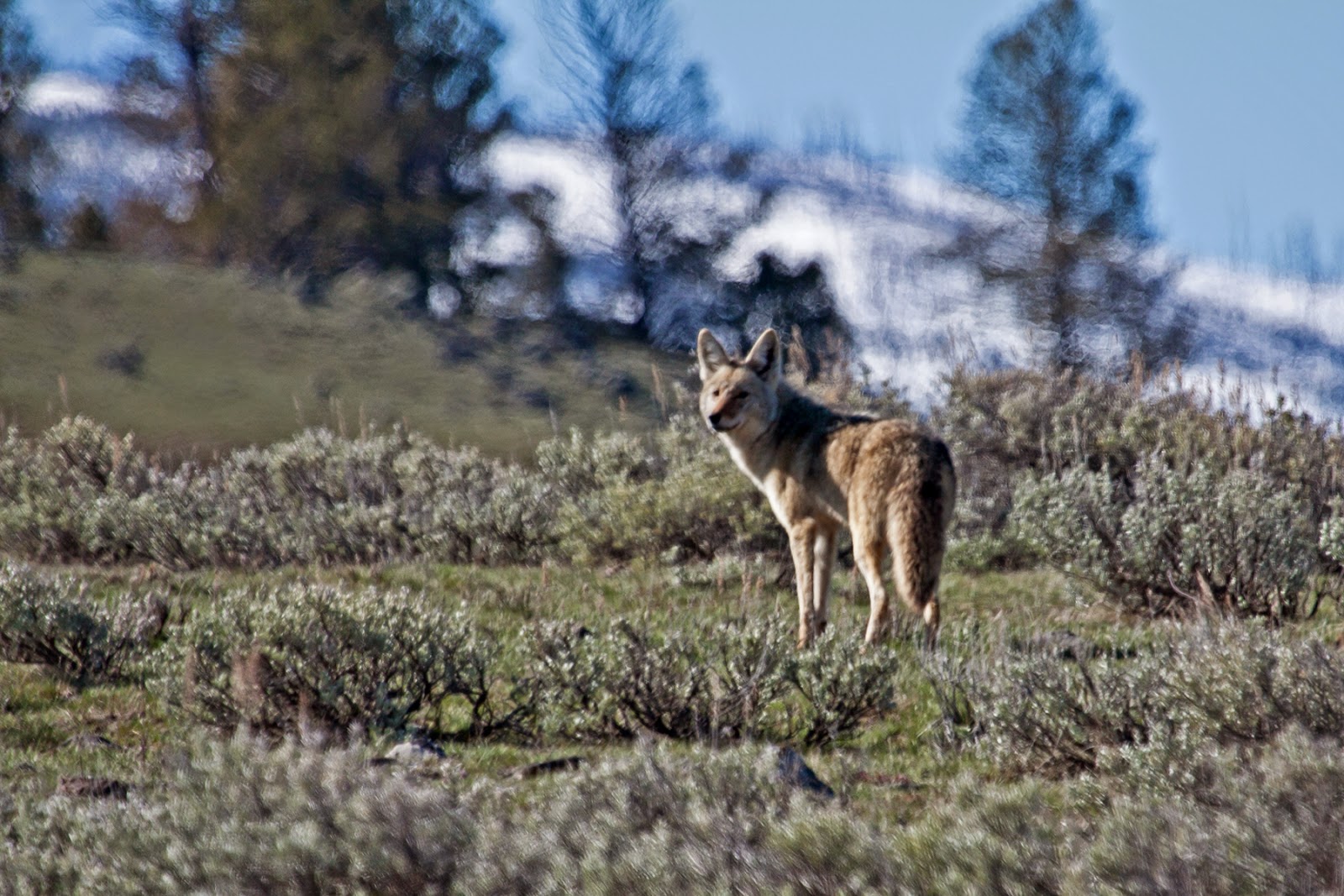 Elks were plentiful. This herd was strung out on a ridge, and when were drove around the bend in the road, we saw what had their attention. It was a bear along a river. 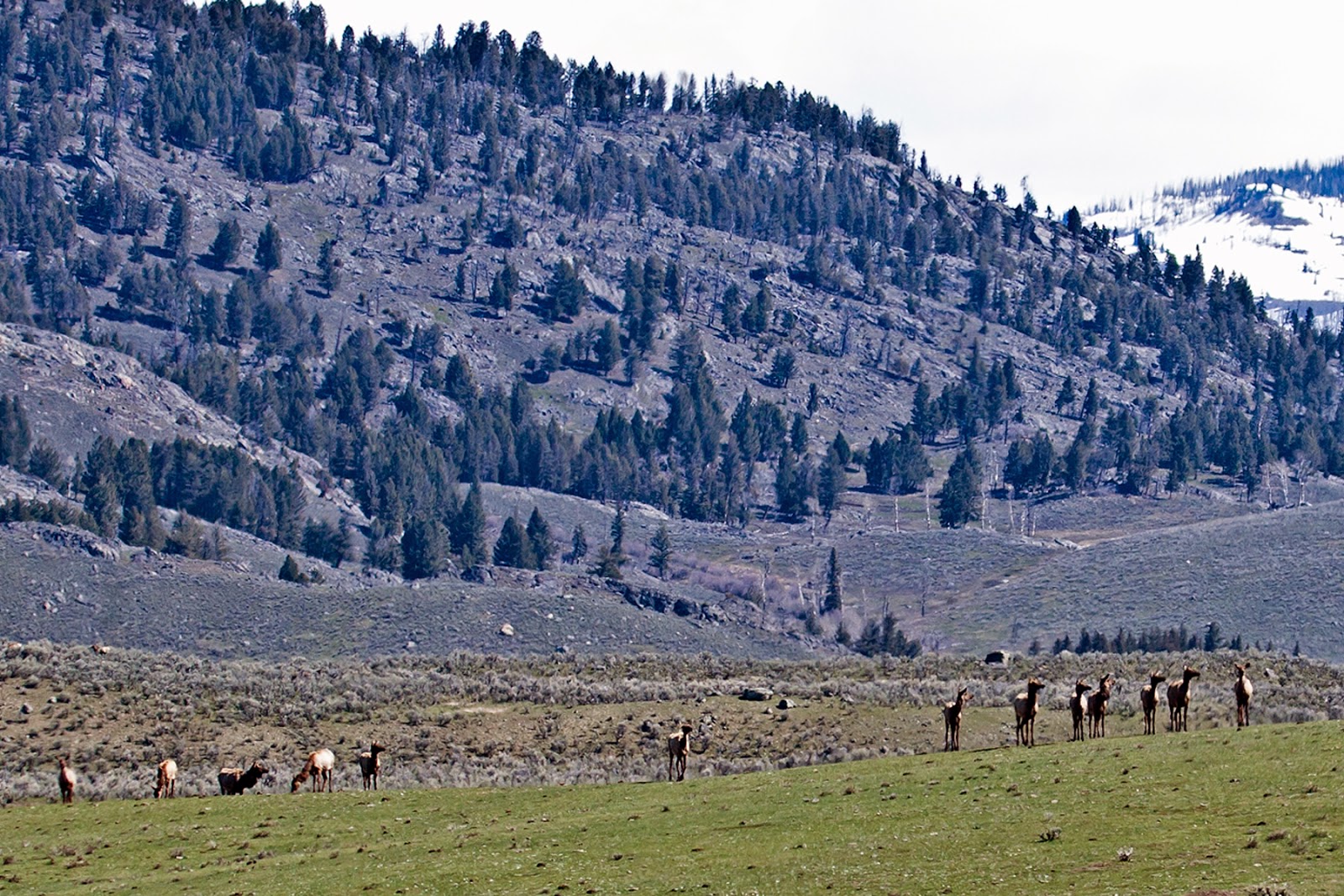 This guy was resting as he was spending all of his energy growing his new set of antlers. You can see that they look more like velvet than the boney look you'll see in another month or so. If you are not familiar with their antlers. They grow at a rate of 1 to 2 inches per day. 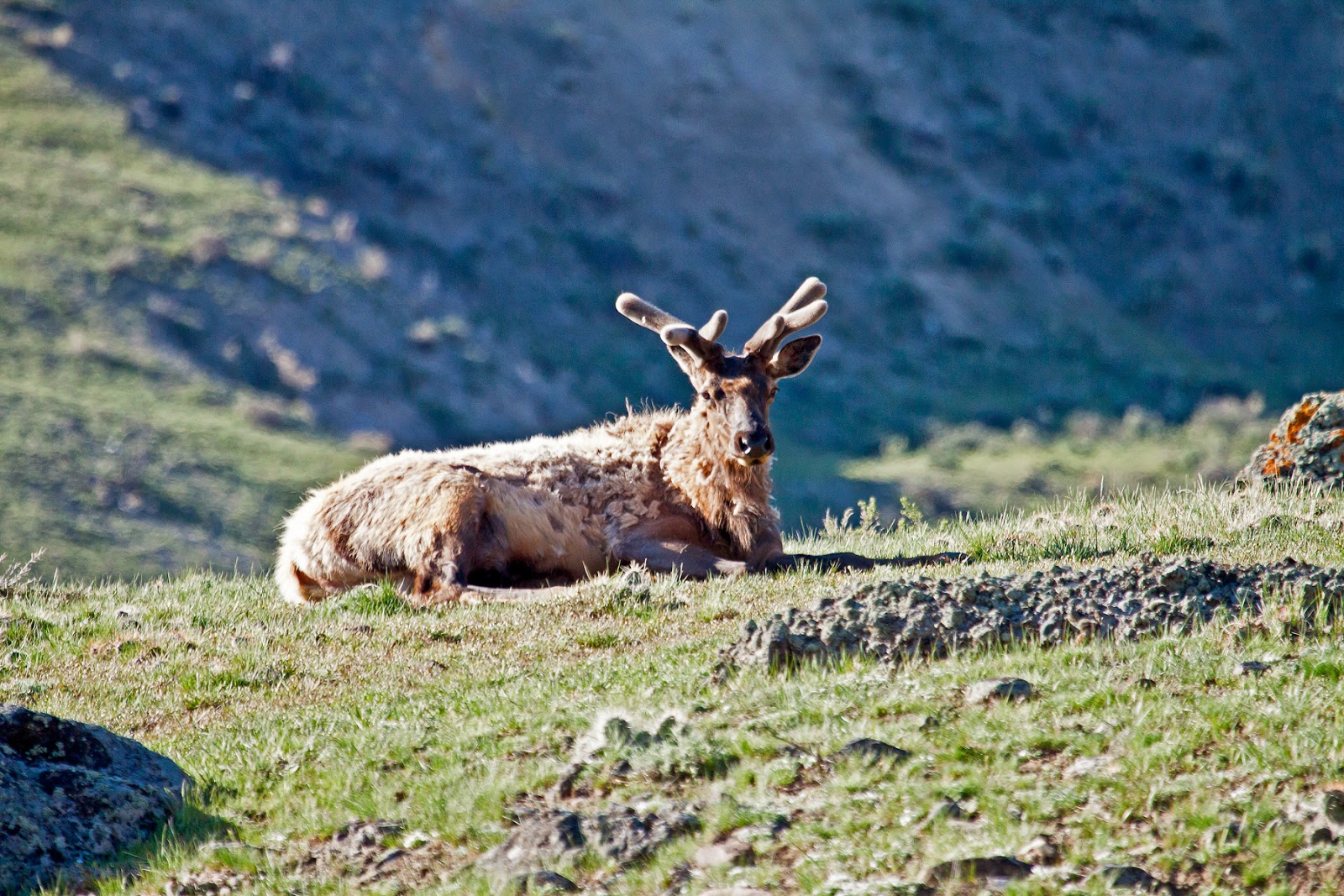 I still don't know what this guy had up his sleeve. We saw him in the river and he was not crossing it. He may have been warm and wanted to cool off and certainly he was thirsty as I saw him drink on several occasions. 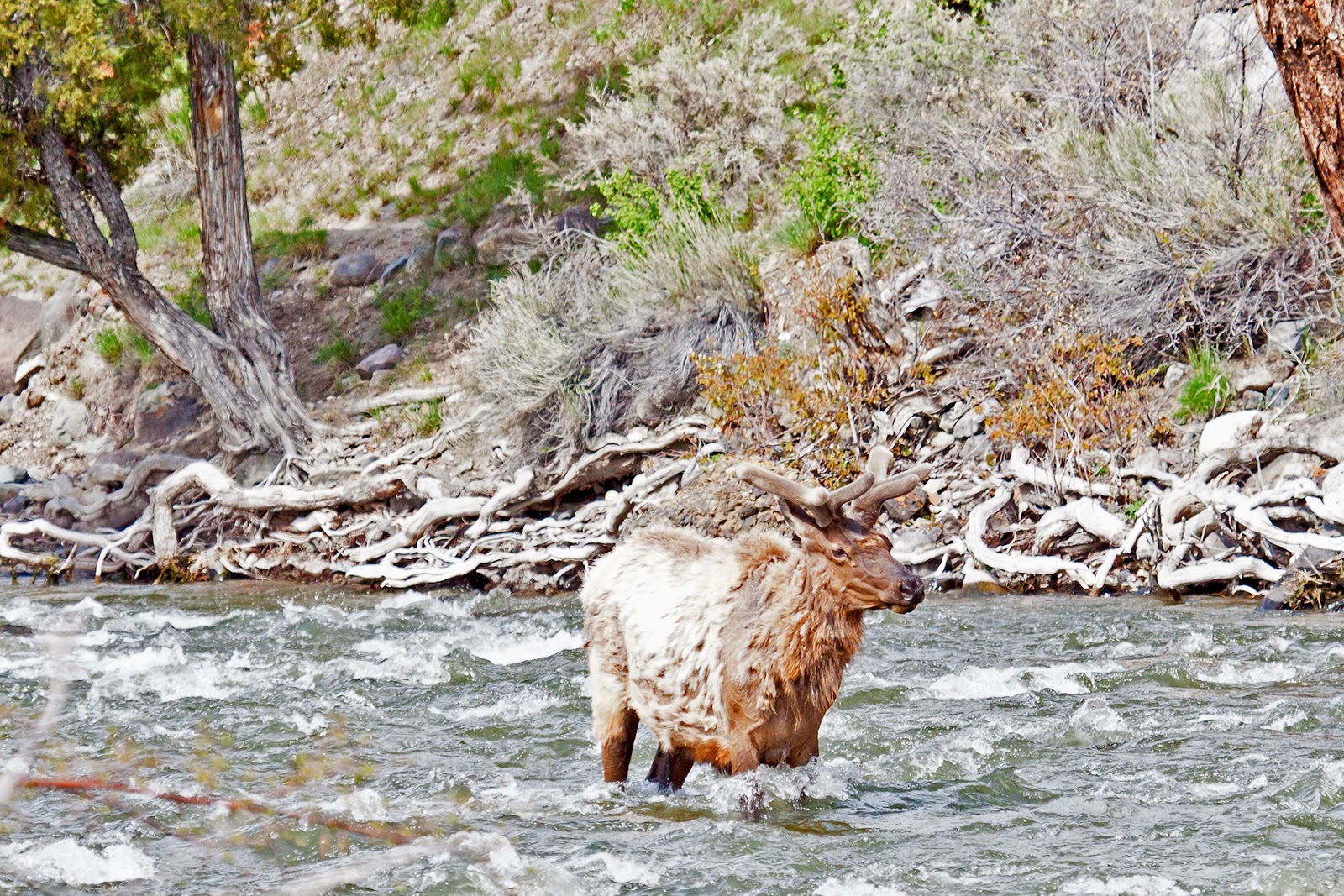 One of the sites I was hoping we would see were the new born bison calves. Almost every sighting of bison included some new calves. Not all were close enough to get good photographs, but these were.
This calf was walking along the river, content to be with it's parent. 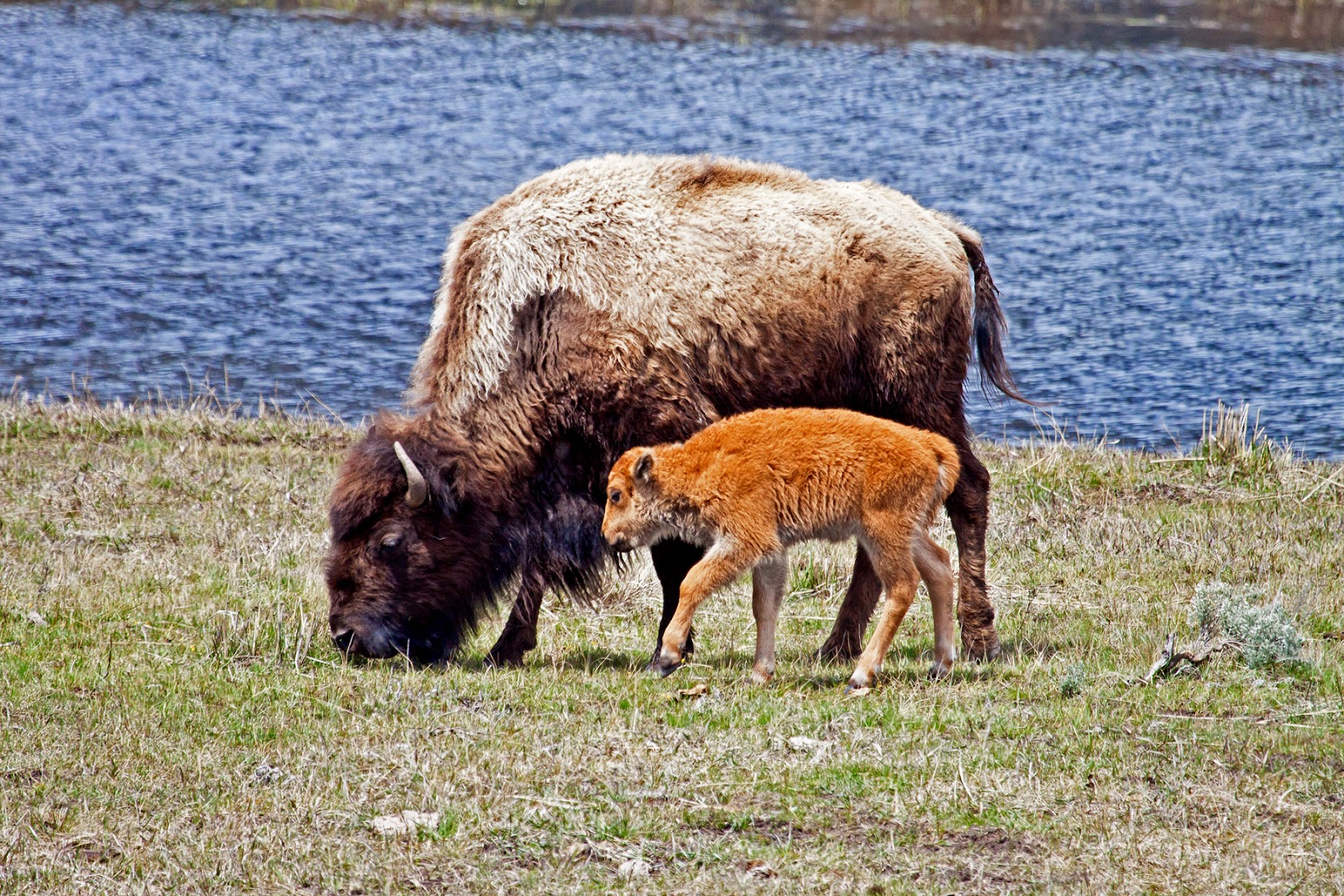 The calf near the head of the older bison is happy to be with it's parent. I said it was whispering to the parent that this other calf is it's good friend Billy, the Bison. 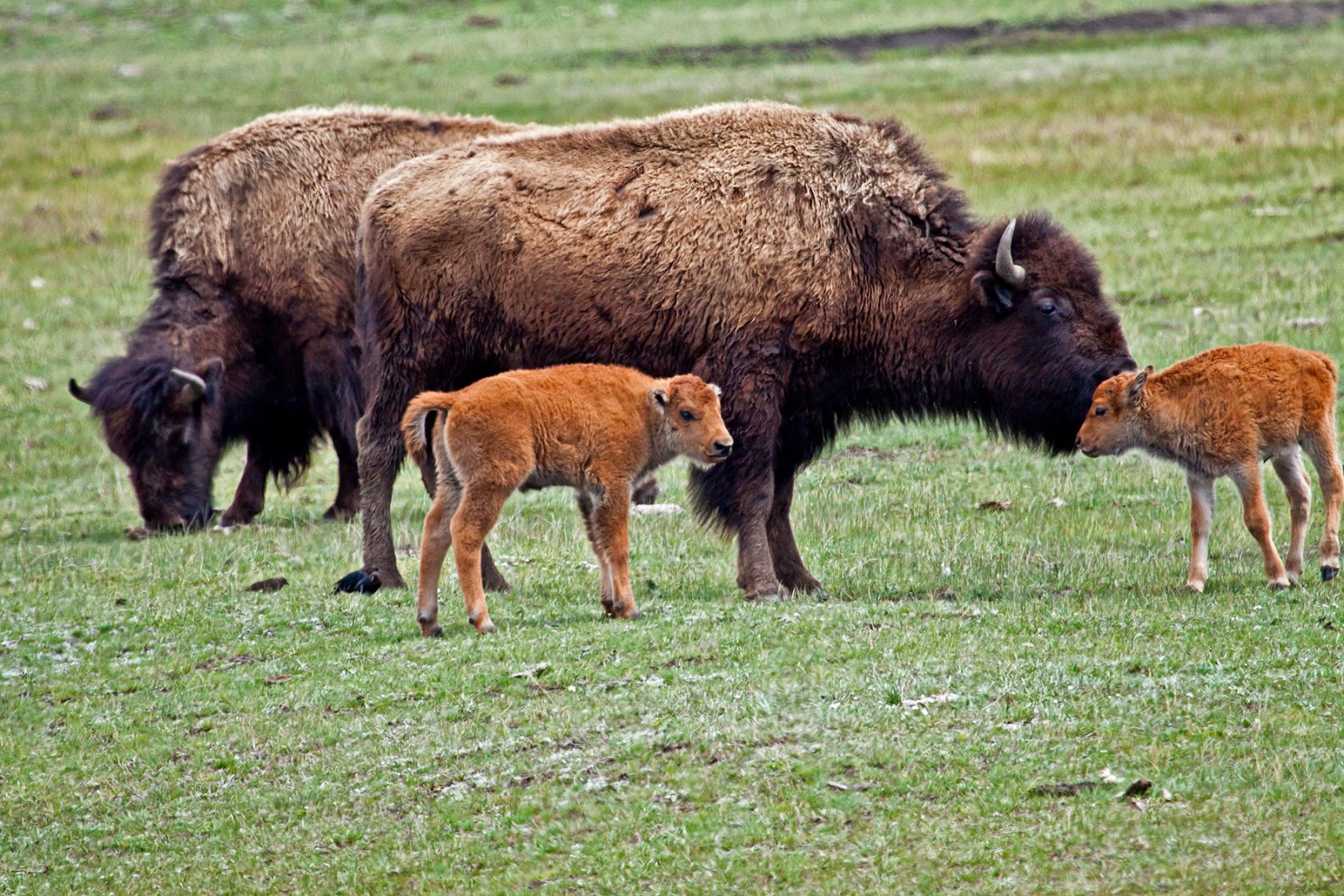 We plan on returning at least 2 more times in the next month and hope we can find as much to share with you after those trips as we did not this one.
Posted by Clint at 2:04 PM No comments: Links to this post