What's in a name? When our 4th Great Dane was named over 8 years ago, it was in honor of our local veterinarian, Dr. Sarah Barlau. In retrospect, it was a bonding of the 2 and for sure extended Barlo's life at least 1 1/2 or maybe even 2 years. 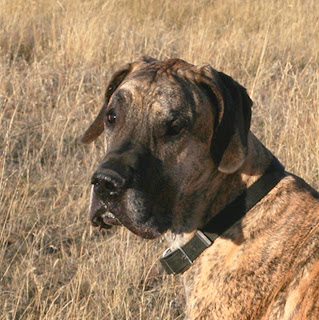 Physically, Barlo had a very large head and the weight on his neck and spine caused him a number of physical problems over the years. Early on, Sarah developed a brace that he wore to take pressure off his spine and back. In later years, the condition of his back was one of the worst ever reviewed by Colorado State University veterinarians. 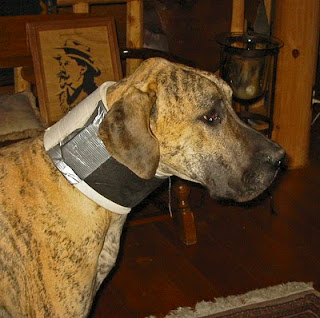 Dr. Barlau to the rescue again. This time it was chiropractic in nature and after each session, Barlo was like a new dog. In addition, Dr. Sarah had selected medications to reduce the pain as well.
During his lifetime, there were events that people will remember as Barlo. If you were a lady guest and you sat in our living room, Barlo would find his way to your lap. His fanny in your lap and his front legs on the floor. If Marty would lie down on the couch, who do you think her partner was . . . . . . 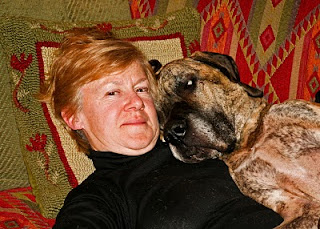 of course it was the lap dog, Barlo. Another memorable event was the photograph taken of Barlo and Kenya on the couch and Marty's lap. How about when he was a pup and he went to the dishwasher for more food. 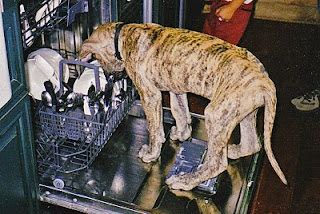 He loved to walk in the pastures and on several occasions he found what he considered a treasure. A bone from a deer carcass was in his mouth for several days. 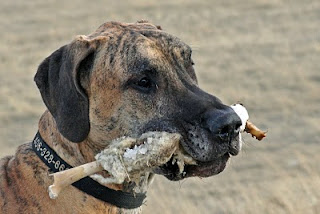 The remains of this carcass he dragged from the Grove Creek and was not about to relinquish it to anyone. 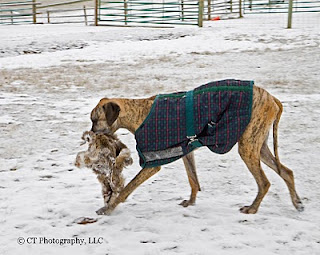 Then there was the day he discovered a porcupine under a bush near the creek. This was his prize and in spite of the pain, he didn't give up until the porcupine was dead and he had acquired enough quills in his head and neck that it took 1 1/2 hours at the vet clinic removing the quills.
He wrestled with Clint in the yard until Marty made them quit because she feared someone would not think Barlo was just having fun. He protected the front gate and most people arriving would not proceed to the house until the "big boy" was under the control of Marty or Clint. He napped on the deck with his favorite cat, Ruthie, and posed for photographs with the guests.
Can you image the stories that are now being shared with Chelsea, Levi, and Hannah? 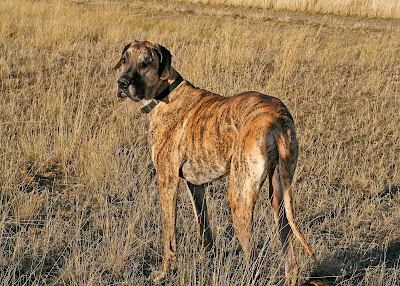 He will be missed. Friends, relatives, Kara - his friend at the United Bank of Absarokee, the UPS driver, neighbors, and of course his name sake, Dr. Sarah.
Posted by Clint at 12:13 PM No comments: