This past fall, we discovered a new entrance to Yellowstone National Park. It starts about 8 miles north of Gardiner, where the Roosevelt Archway resides. You cross the Yellowstone River and head south on a dirt road that travels through acreage that is now part of the park.

Soon after we crossed the river on this trip, we saw a lot of bison, in areas that we were not accustomed to seeing. These bison had drifted out of the regular park and were looking for better place to eat in the winter. There were 2 reasons for this activity. The vegetation in the park, this time of the year, is not only snow covered but not very rich in nutrients. In addition, there is currently an excess number of bison in the park based on the vegetation and the total population of all species of animals. 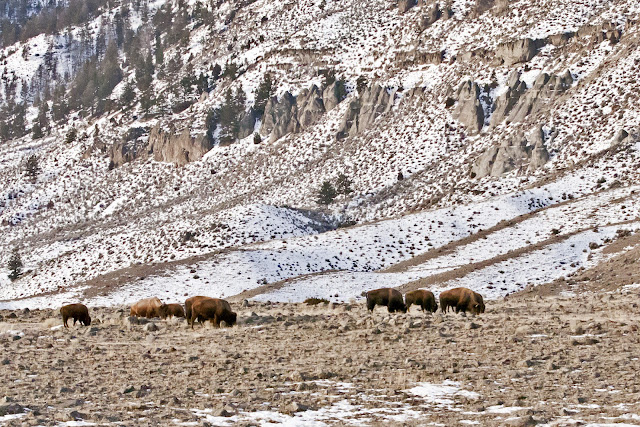 We were aware that the hunting season for the bison had been extended in hopes of reducing the population to a number that is inline with the proper sharing of vegetation. We had not traveled far when we started observing swarms of ravens or crows as you might call them. These 2 trees had about 75% fewer birds in them when I took this photograph, as we had frightened them as we stopped to take the picture. 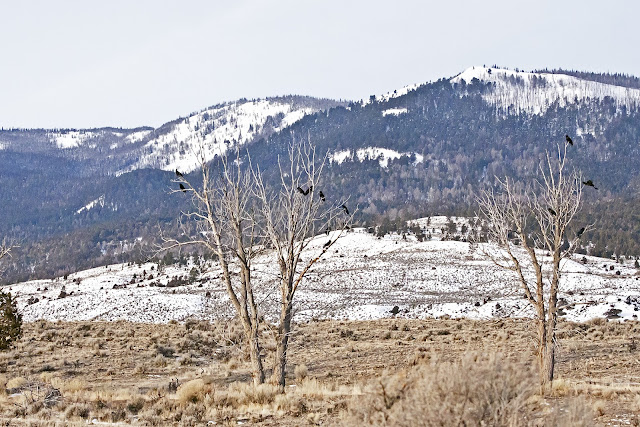 Anyone living in this part of the country knows that when you see swarms of ravens, there is a carcass nearby. What had attracted the birds to this area was the remains of bisons that the hunters were not interested in taking with them, after they killed their target. As we left this area and before we went through the archway, we passed the Gardiner School and football field. Guess what we saw, more bison and pile after pile of bison manure, the remains of them grazing on the grass from the football field. 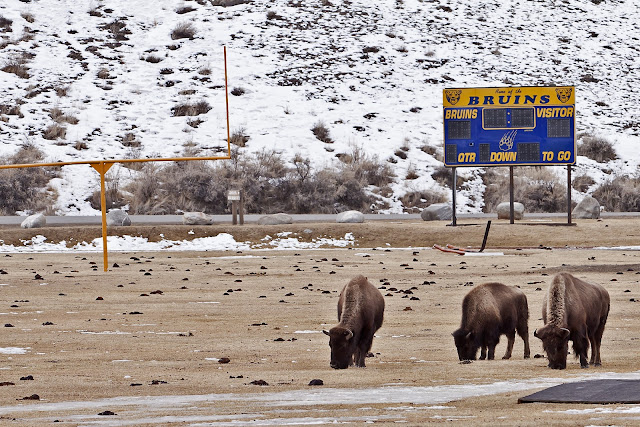 Then we learned something else. At this time of the year, there is no detention for the students who get in trouble with the school and/or teachers. The problem students are offered a bag, a scoop, and are pointed to the football field to start cleaning up the manure. I guessed this was enough of a deterrent, that the student body was on it's best behavior, and the manure was piling up.

We were soon in the park and we saw a lot more bison. Soon after we headed east from Mammoth Hot Springs we started to see them on the road, and they were not interested in letting us pass. We lost at least an hour of travel time as we headed east and then returned. 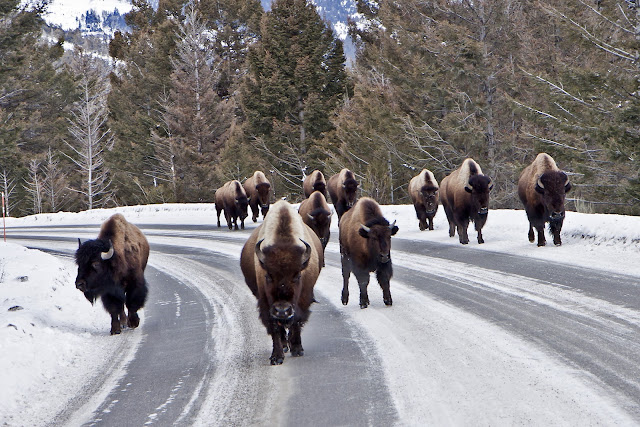 The scenery changed as we spotted a coyote who had just crossed the road and was heading into the trees. There were other coyotes during the day but we needed binoculars to see them. 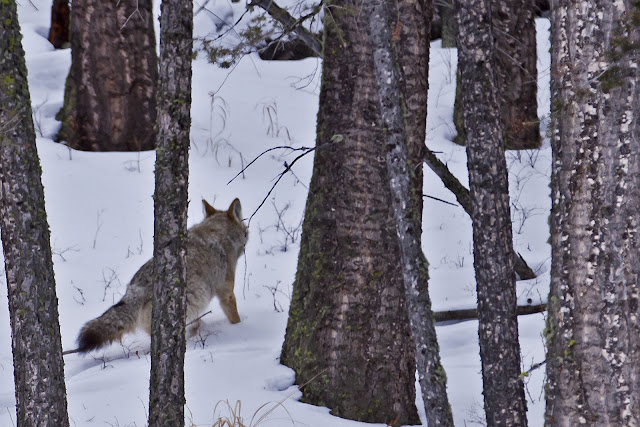 And it just wasn't just herds of bison heading down the road, it was also bison who preferred the road to the deep snow, and when they got good footing, they decided to do other things as these two were fighting and held us up until they were tired. We didn't dare try to pass them as we might had been rammed by one or both of them. 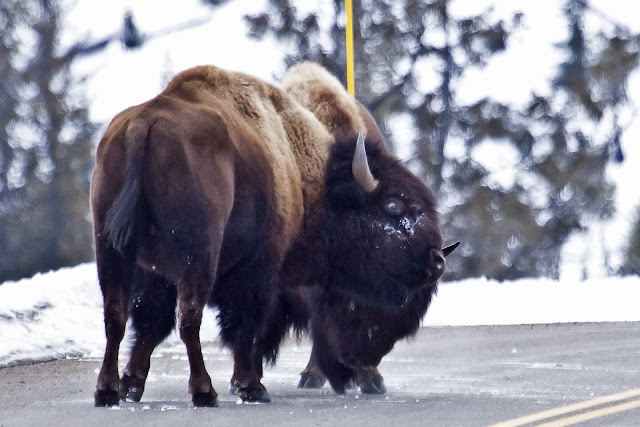 We had our fill of bison by this time. So we came along a herd of pronghorn, you may call them antelope and this one seemed to be posing for us. Thank you Mr. Pronghorn, we needed a break in the scenery. 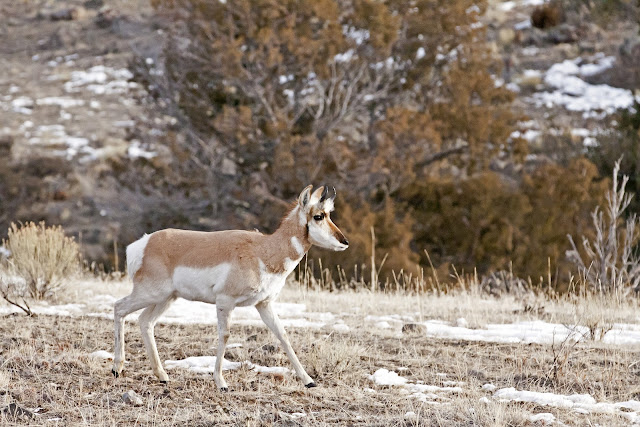 But it wasn't over yet, as we were traveling through Lamar Valley, look what was napping in the middle of the road. Not only was there no snow on the road, but by now the sun had warmed it up to the point that it was a comfortable rest. 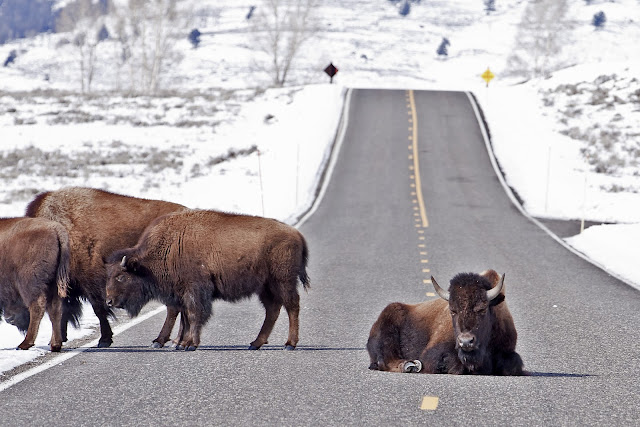 More of the same until we were heading north of Gardiner towards the bridge we had crossed about 8 hours earlier. As we peered down to the Yellowstone River, we saw this marvelous bird. What a way to end another wonderful trip to the park. 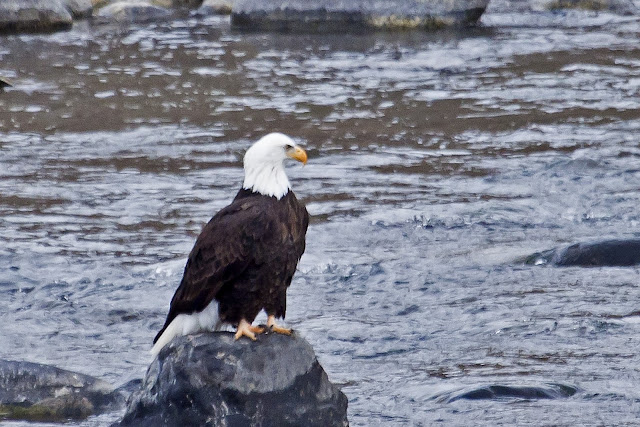 You are probably asking, were there any elk during your visit. There were quite a few but none of them  triggered my photograph sense. We did not see any wolves at all.

Tune in next month and we'll share our next trip through the park with you.