The birth of a new season

Our most current trip to Yellowstone National Park started on June 7th. We arrived via the Beartooth Highway and were overcome by the amount of snow that still existed at the top of the mountains. We traveled thru the Lamar Valley and arrived at our destination, Chico Hot Springs for dinner and a dip in the hot springs. We returned to Yellowstone on the 8th and had just passed through the northwest entrance, on our way to Mammoth Hot Springs, when we noticed a single car parked along the side of the road looking into the rocky slope. The image that you see, is what they were watching. 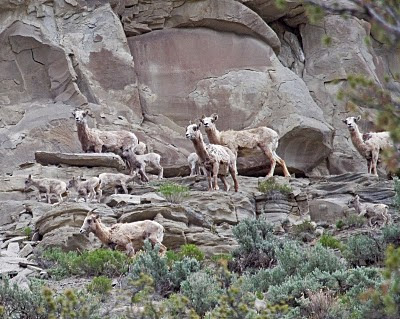 A herd of Big Horn sheep and their 2010 crop of babies were strolling along the rocky ledges. The young ones were having fun, jumping ahead while the mothers tried to lead them along the cliffs. I soon discovered 3 of them had found a nice big rock as a platform. I immediately took this photograph as it was only seconds later that they had jumped off the ledge and were running around the slopes. They are very sure footed to maintain their position on the side of the rocky mountains. 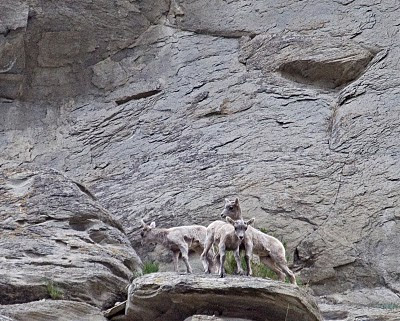 On to Mammoth. We were out of coffee and we needed to take a pit stop before we ventured south toward Lake Yellowstone. I missed the turn and as I attempted to correct my error I noticed a lot of people with cameras on the street ahead. Not wanting to miss anything exciting, I drove on to find that a female elk had just given birth to a fawn. Immediately, I parked the car grabbed my camera and starting taking pictures. We observed most of the things that happen during the birthing process and I took close to 75 photographs recording the various events. The next three were our favorites. This is the young calf, moments after it's birth, attempting to get up as it's mother licked it to give it strength and encouragement. I labeled this, "I love you Mom" 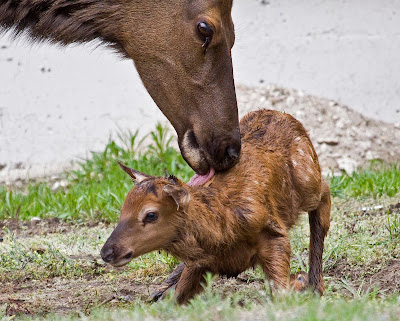 Soon after there was another new arrival at the scene, of course there were more people as the word spread of the fawn's arrival, but this arrival was not a twin, it was a magpie. They do have a symbiotic relationship with elk and we soon observed the real reason for it's being there was to help get rid of the afterbirth. Hopefully, this would prevent wolves and bears from getting the scent and perhaps attacking mom and the new fawn. I'm not sure if the mother was inviting the magpie, introducing it to the fawn, or hoping with would leave. 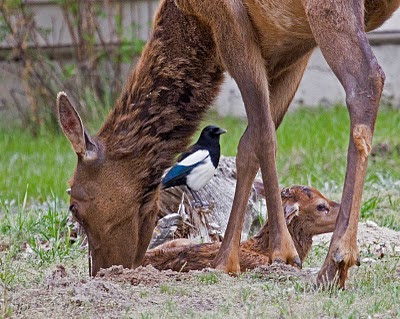 The next order of business was for the calf to get enough strength to stand up and get some nourishment. The calf was quite awkward and it took some time for it to maintain it's balance long enough that it could get near mother's milk and have it's first meal. This is usually the first critical step in the life of the newborn, and this youngster passed the test as seen in this picture.
Before the day was over, we saw something new on something old. Each year the bull elk lose their antlers in the late winter, early spring and soon the growth of the new antlers begins. This guy is very proud of his new growth and is looking forward to sparring with his fellow bull elk to then earn the right to sire some calves for the 2011 season. 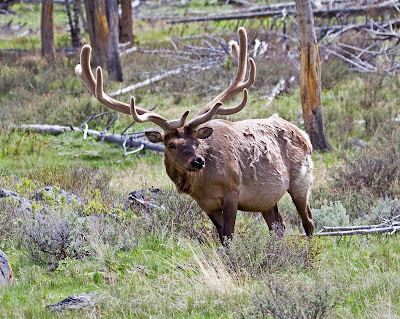 It was a great trip, Yellowstone abounds with other new life and another year of tourists.
Posted by Clint at 7:18 PM No comments: