Look what we found just walking around

A hike in the Lamar Valley in Yellowstone National Park. We were on our way to visit a wolf den that was dug close to 10 years ago by one of the first females after the re-introduction of the wolves to have pups. To the east we saw bison or if you prefer buffalo, we tripped across several huge antlers from elk, we have seen bears roaming in the area, of course there have been wolves and coyotes. But this day as we were leaving the empty den, someone spotted a bird in a tree. Is that a bluebird? I think it is. As I tried to get a photograph, I was on the wrong side of the tree, the sun was creating a shadow. If I walk around when the sun is providing the ideal light on the subject, will the subject still be there. In the wild, most birds are not used to a photographer roaming around the tree looking for the perfect place to take a photo. Today, I was lucky and this is what I got. 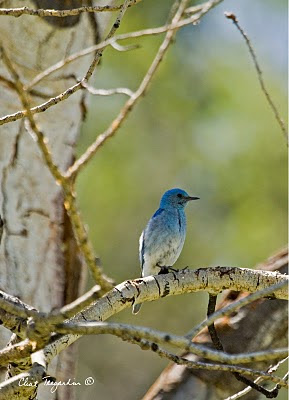 So now it's back to the bus and on to our next stop. You will not guess what I found along the way. In the 2 million acres of Yellowstone, you expect to see wildlife, mountains, and beautiful terrain. How about a flower, proudly sticking it's beautiful bloom out of the field, and instead of tripping over it or accidently stepping on it, I took a photograph. 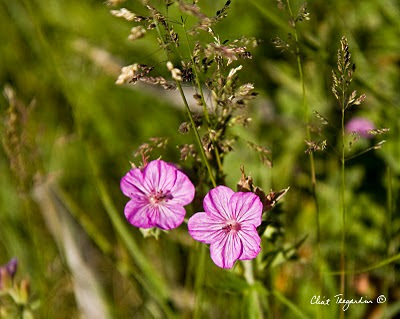 Have you been to Woodbine, along the Stillwater River? If you did, the first thing you saw was the Stillwater River, in the spring as the water flowed from the melting snow in the Beartooth Mountains, in late summer early fall, the beauty of the mountains and a stream still providing water that could end up some day in the Gulf of Mexico. Maybe you were planning on catching a trout, perhaps just a hike, or maybe you hoped to see some wildlife; maybe a moose, or a bear, or a bighorn sheep. Not on this trip, and camera was focused on something you may have seen but would not have said that's why you took the hike. How about this beautiful flower? 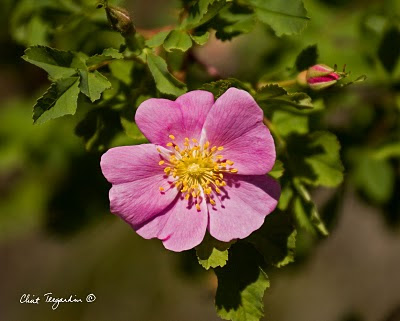 and only a few steps away was another one. These are just a few of the pretty plants that appear during the year, and at times there could be an entire landscape with them rather than a random plant here and there. 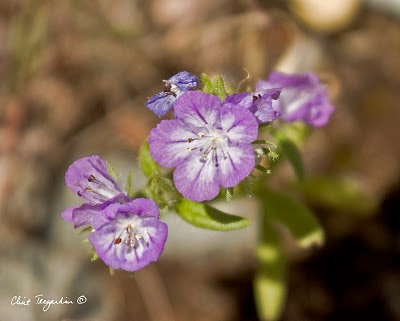 What would you expect to find in our barn, certainly an Arabian horse, maybe a new saddle, how about a blue ribbon or a trophy, Ruthie the cat or her sister Martha might be home, Barlo or Kenya our 2 great dane dogs, or do you have a new foal. None of these. I have been observing a bird nest being built in one of the eaves in the area where we store the hay, the nest was finished, the female bird was sitting on the next, then it appeared that there might be young ones. Then one day, I see beaks appearing at the top of the nest. I waited, and I waited, then I brought my camera to the barn and took this picture. 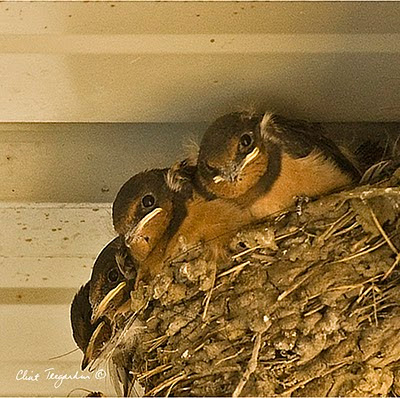 Most people what not want these you barn swallows in their barn, but I let nature take it's course. I'll tear down the nest after they leave and hope their family will find a tree or someone else's barn to build a nest next time. I stayed around hoping "mom" would return with some food. I didn't have to wait long, and this is what appeared. 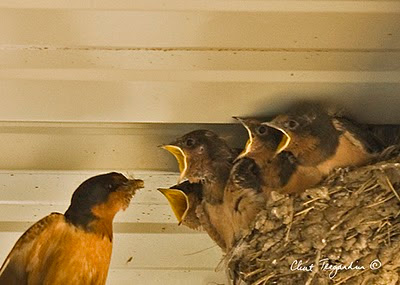 Every one who has seen this photograph was asked, who got the food. If you guessed the second from the left, you are right. In fact "mom" had her head completely inside that ones mouth as she deposited the food.

Just walking around you can see some interesting sites.