Another horse show with some side attractions

Lots of classes and 4 horses from the Circle B Bar T  traveled to Bozeman for a busy day of classes. There were several stars from the Circle B Bar T, each one for different reasons. We'll start with Johnny and his rider, Marty Baxter. It was only the second show of Johnny's career. As you can see, he loves jumping. Believe this or not, he was tied with Grover in one of the jumping competitions and they competed for first place. Not only did they have to clear the jump, but the one with the fastest time was the winner. Marty turned Johnny in the wrong direction which extended his time and Grover won. 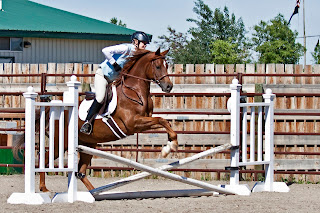 You have seen Grover jump, and you know that he won a blue ribbon in his favorite event. However, there was a great photograph of him with Wendy Bleacher which we are posting rather than seeing him jump again. Wendy, you look good also. 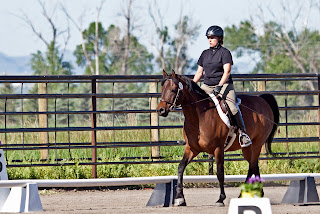 How about a horse and a rider in their first show ever. Yes, Melissa Ranstrom and her horse Gracie participated in 2 classes and left with second and third place ribbons. Gracie surprised everyone as you would have thought she had been competing in the arena for years. Calm, collected, and made a great representation in her first event. 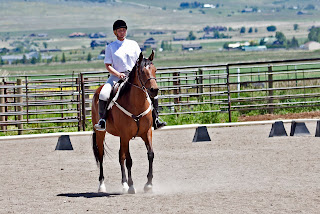 You know that Johanna Kern and Doc were there. They did the fancy dressage steps in 2 different classes and came away with 2 blue ribbons. As you can see from the photograph, they looked great, but the setting was great as well with the snow covered mountains in the background. 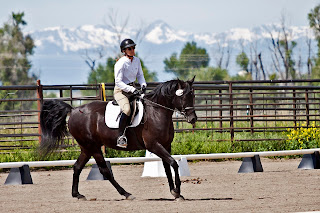 Now if you think we got bored, you're wrong. We were greeted at our arrival by one of two pet hogs that have complete access to the entire property and there were 2 litters of puppies. Pictured here are one of the hogs and one of the female dogs. And if that wasn't enough . . . . . . . . . . 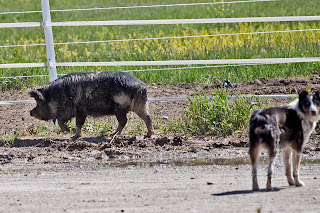 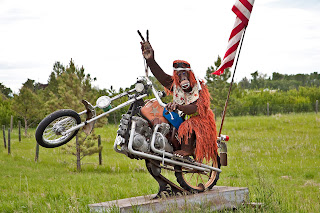