There has been a lot of speculation about the migration of the wildlife and particularly the bison in the last few days in Yellowstone National Park. For those in the know and those who have observed the wildlife in Yellowstone recently, the cause is not the animal instinct that another volcano is about
to erupt like the one several million years ago. It's the fact that the winter of 2013-2014 is one of the
severe winters that has been experienced in Wyoming and Montana.

As a result of the tough winter, the vegetation is even more scarce than typically this time of the year.
So, what does the wildlife do, they migrate to area's where they hope there may be more to eat.
My wife and I visited Yellowstone on April 2, 2014 and made the following observations and took these photographs in support of what we saw.

This is one of the few bison that we saw as we drove from Mammoth Hot Springs toward Cooke City. It was not the healthiest looking bison and was content to be standing here as we passed going East and still there when we returned going West. 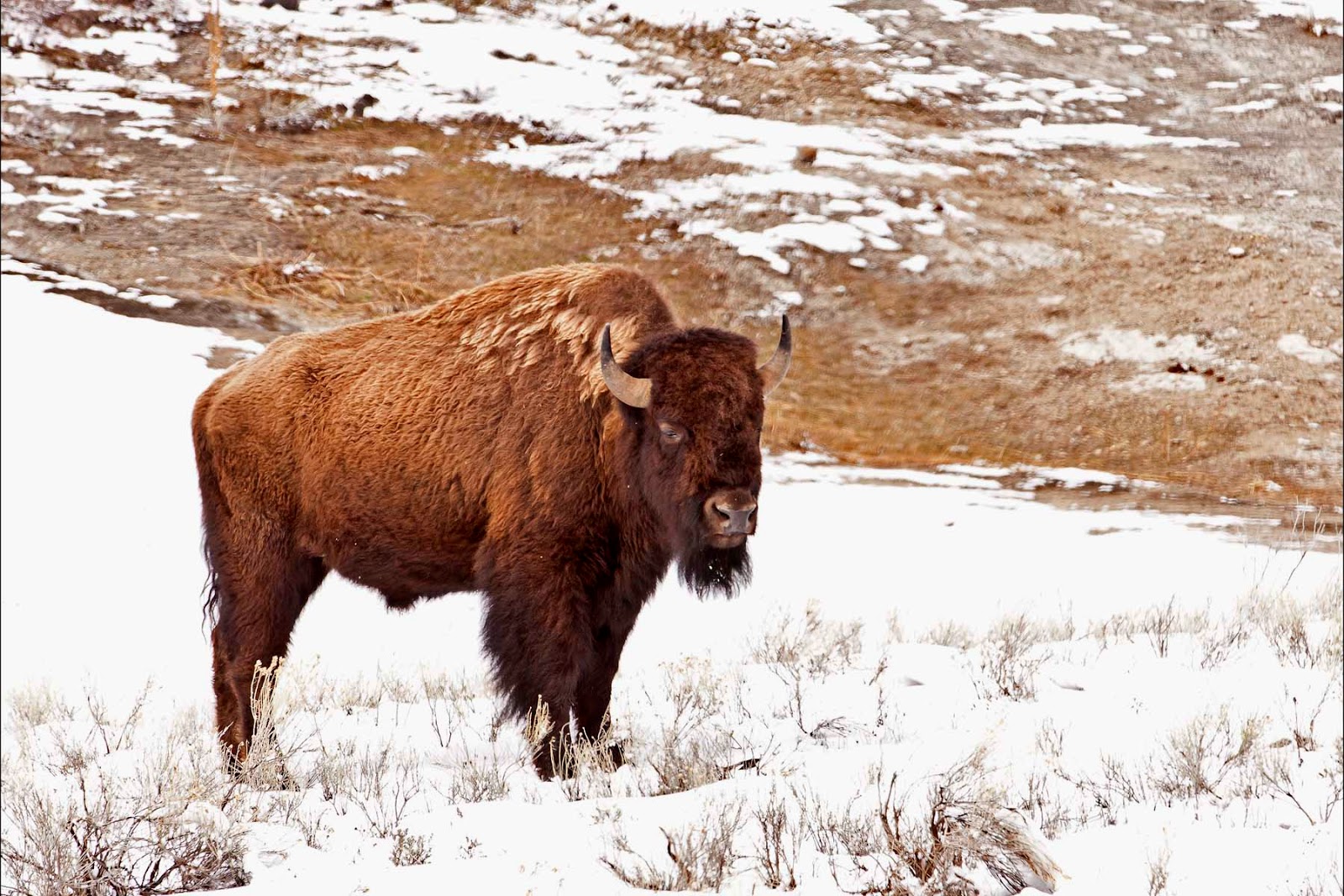 We have been to Yellowstone in the winter on many occasions and had never seen as many bison on the road, in the fields, and pastures outside the park, north of Gardiner to the cattle crossing on route 89 approximately 14 miles north.

This is a scene where pronghorn and bison were inter mingled with a lot of bison in the hills in the background,. 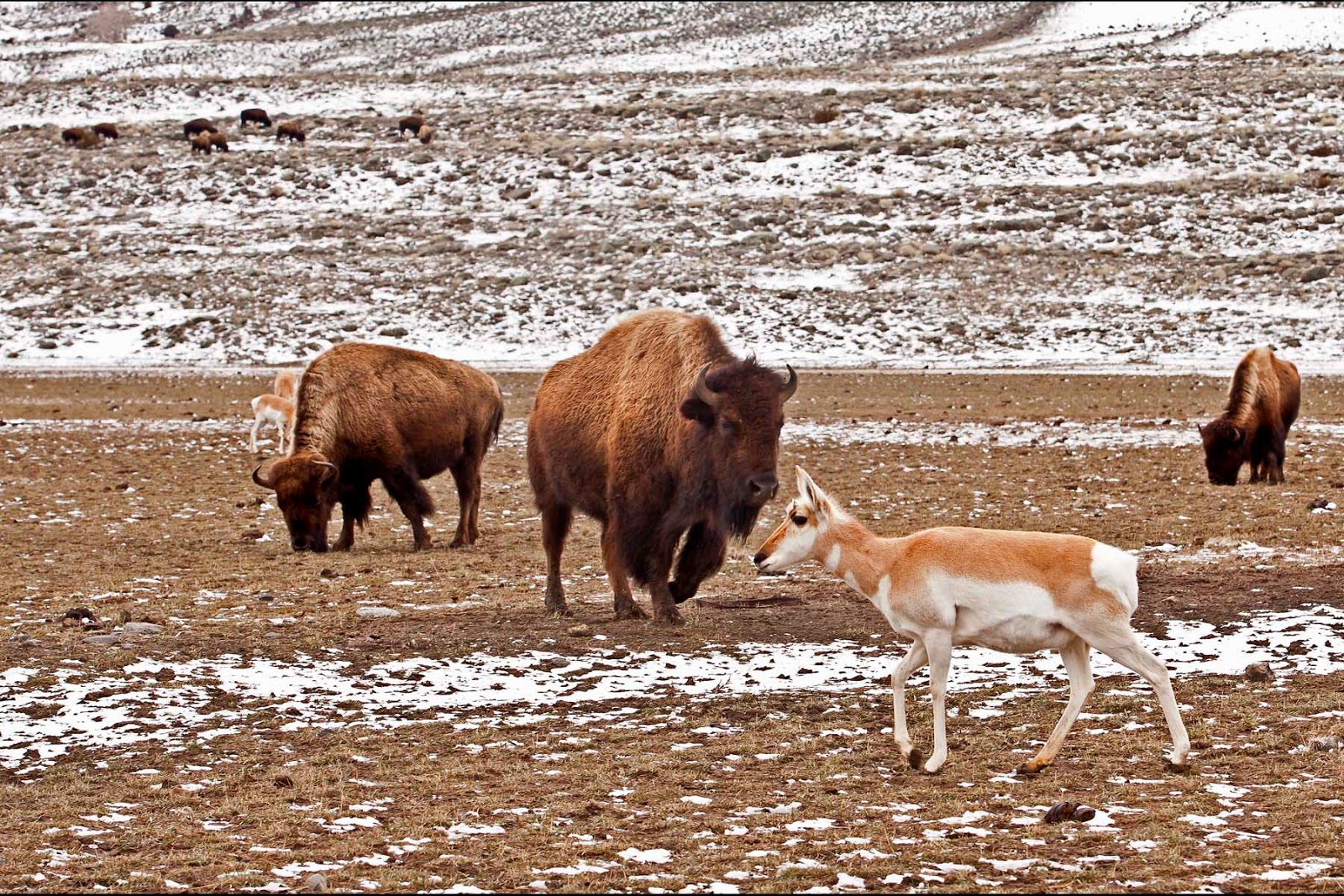 If you compare the vegetation in the first photograph and look carefully here there are signs of vegetation and the wildlife is grazing the available forage.

Just across the Yellowstone River was this scene. You ask the question, why were most of the bison laying down. Again if you looked carefully, they were chewing their cuds and at least their bellys had more in them here than in the park. 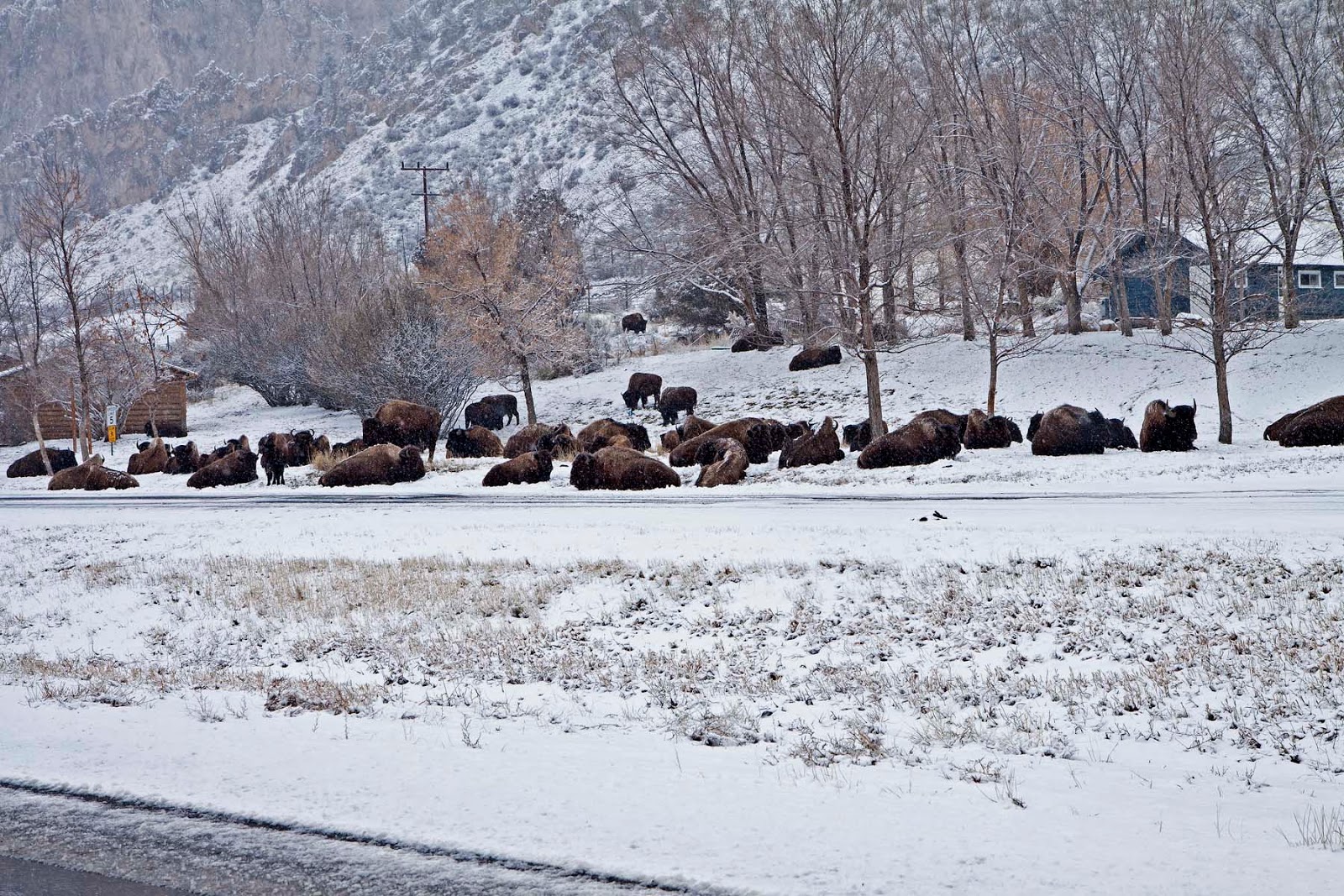 and then a sight we had never seen. Bison crossing the Yellowstone River to get when the better grazing was. I didn't believe what I was seeing until I got close enough to take this photograph. 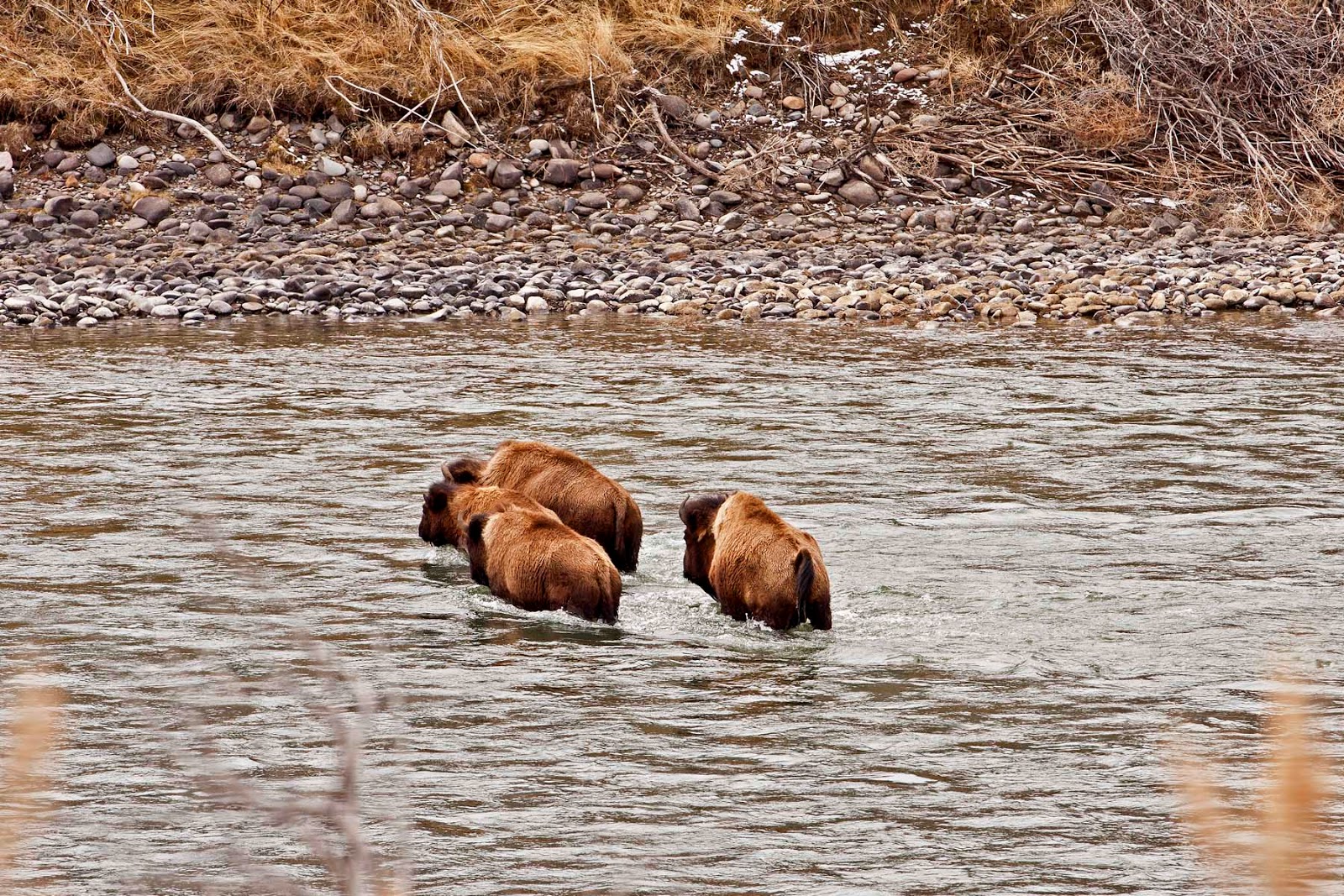 Finally, this was the other side of the Yellowstone. You can see some who had crossed the river and others who were returning for a drink of water. 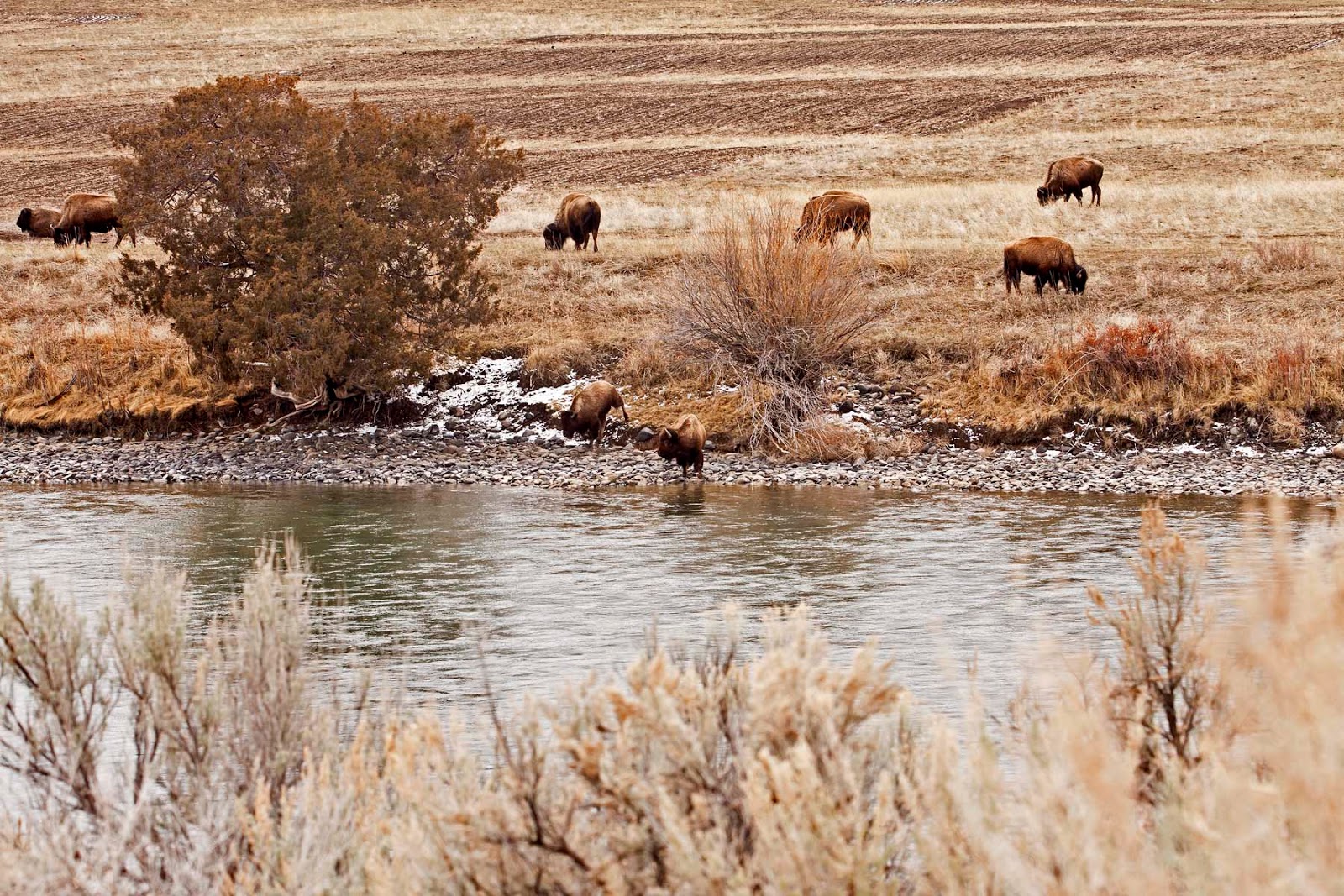 To make the point even more profound. Where the bison were migrating to we also saw a lot of pronghorn, big horn sheep, deer, and elk. We saw none of them while we drove over 80 miles in Yellowstone.

Finally, Al Nash, Chief of Public Affairs, Yellowstone can be seen on this web site where he provides his opinion of the wildlife migration.
http://billingsgazette.com/news/state-and-regional/montana/yellowstone-fighting-online-supervolcano-rumors/article_81471a70-37f7-587a-bc98-adb35cfe6927.htm