How about a different National Park. We decided to go to Yosemite so that we could visit a new park and at the same time say hello to Marty's cousin who lives nearby. Well . . . . Yosemite is a lot different that the other park that starts with the letter Y. Yosemite is only 1/3 the size of Yellowstone, it has twice the number of visitors. There is not much wildlife, a lot of big trees (Sequoias), and if you are not into trees, and you are not a tourist, then you have to be a rock climber. As you drive through the park you find yourself in Yosemite Valley or looking at trees. The following are some of the photographs that Clint took during our visit.

If you think you've seen big trees, look at the following photographs. the first one is the remains of a sequoia that had fallen and this is the root end. Marty is posing next to it. 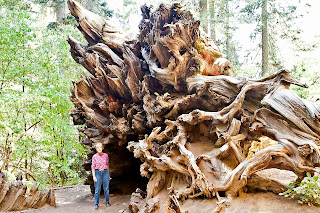 This is the remains of a sequoia that had a tunnel created thru the base. This is not the only one that we saw while we were visiting Yosemite 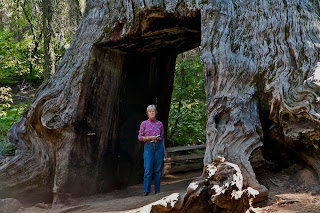 This is another perspective of these large trees. This one is huge when you consider the number of people spread across the base. One of the top limbs on this tree has a diameter of over 7 feet. 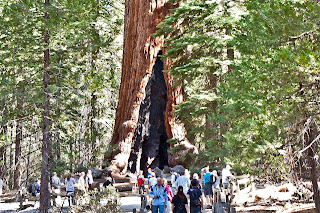 Finally, Marty and I posed in front of this setting of 4. One has been named the bachelor and the other 3 were identified as the three graces. There are 3 specific groves where you can see these trees in Yosemite. They are a spectacle. 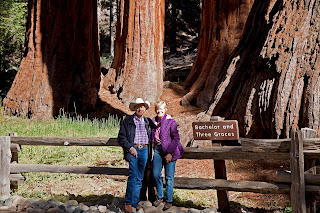 One of the large rock formations has been titled El Capitan.  That is what this huge formation is. It is one of the places that the rock climbers enjoy. For some it takes days and if you are very, very good you can climb the 3000 foot elevation in hours. One of the interesting facts is many of the climbers stay on the face of El Capitan overnight. They actually have some type of a bed that they anchor into the side of the rock. 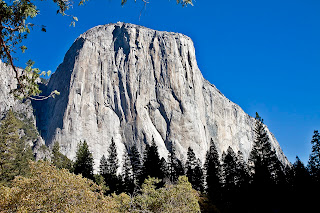 This is another of the famous rock formations in Yosemite. It rises some 5000 feet above the Yosemite Valley and reaches some 8800 feet above sea level. It is reported that every year thousands of people hike the 16 miles to the summit with a round trip taking from 10 to 12 miles. Marty and I drove to a point where we took this photograph and didn't have to hike far to get here. This is Glacier Point and is accessible by car. We had no interest in hiking to the summit. 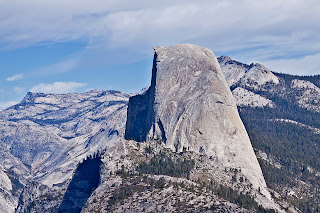 Speaking of hiking and mountain climbing. Look at El Capitan again. When I took that photograph, we were in the Yosemite Valley. We were made aware of some climbers going up El Capitan. I zoomed in on the location with my 400mm lens and captured this image. There are two climbers on this small ledge on their way to the top. 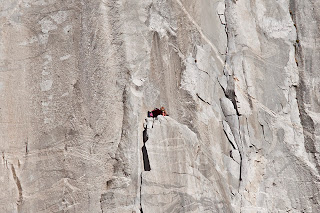 There are a number of water falls in Yosemite, but in October 2012, most of them had dried up and there was little or no water falling from them.  Because hiking is one of the more popular things to do, we were told of a hike to the top of Vernal Falls. There is a foot bridge across the water about half way to the falls where we could turn around or if we were adventuresome we could continue to the top.
The round trip to the top of the falls is around 3 miles, you gain over 1000 feet in elevation and should plan to spend at least 3 hours - round trip. It is a steep slope.

We made it - Clint did not bring hiking shoes to Yosemite- so he made the hike in his cowboy boots. It was exhausting, we met some fun people along the way and the scenery was beautiful. 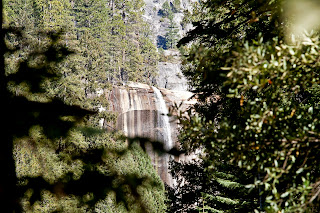 So, if you are planning on going to Yosemite and want to be part of the crowd be sure to take hiking shoes or you will miss a major part of the 750,000 acres.