Seasons Greetings from the Circle B Bar T 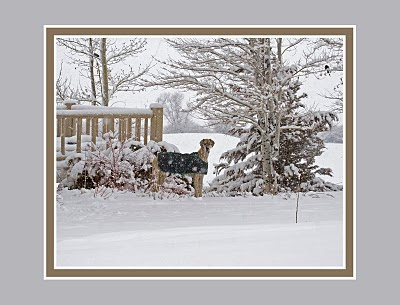 Marty, Clint and the Circle B Bar T Gang

2010 was a special year, when you consider the events that have occurred.

During the last 12 months, there have been at least 6 trips to Yellowstone National Park. On one occassion, Clint took a wrong turn in Mammoth Hot Springs as it was early morning, time for a potty call, and another cup of coffee. When we realized we were not where we wanted to be, we were amazed at the number of people on this side street. The occassion was a mama elk that had just given birth. (go to the June 10th posting for a picture). Clint took his first picture of an osprey and her family in June but didn't get the picture he wanted until 2 trips later.

Marty got to meet the members of the 1960 Ohio State University Livestock Judging Team, their coach, and most of their wives, as they celebrated their 50th anniversary. (go to March 11th to see Clint and his pals 50 years ago).

The grandchildren were very active, including a visti to the Circle B Bar T that started with the first arrival on June 23 and the last departure on July 12th. Jack is now a freshman at Duquesne University in Pittsburg, Petey's hockey team was the conference champions, Crissy not only had a successful season on the softball team but has been drafted by one of the premier girl's softball teams in Connecticut for 2011. Mr. Buckeye, Patrick, was a lineman on the Wreckers football team and was dressed as Brutus for the Halloween Trick or Treats. Curtis and Grace are swimmers with lots of winning ribbons; John is the youngest and celebrated his first birthday in July. Shy Vi is always into something and lost most of her locks this fall.

Another celebration started the first week of May, when the Fremont, Ohio ladies visited Paws Up, a ranch type resort in Western Montana to brag about reaching 60 years of age. We couldn't have packed more into the 5 days we were there. Debby Wenger and Tina Hablitzel were the other 2 celebrants. Husbands, George and Mark, made the trip across the US as well as Clint who escorted Marty from Fishtail.

Marty's birthday, the Big Six O, was September 14 and just 16 days later, she officially retired from her law practice with the law firm of Bricker & Eckler and remains to run the health care consulting company, QMCG, which she formed in 1994.

It wasn't all happiness, as Sammy, the favorite horse for the last 10 years went to horse heaven in June to join her father, Al Dude. The entire family celebrated her passing at the grave site during their visit. (go to July 28th for more about Sammy and the family picture).

In September, Barlo joined Chelsea, Levi, and Hannah. His last 18 months with us featured regular chiropractic sessions with Dr. Sarah and the purchase of a couch which made it much easier for him to lay down to rest. (Barlo's memories were posted on October 26th).

Mourning Barlo's passing, Kenya jumped out of the Suburban to injure her front leg, soon diagnosed as cancer. She is now the happiest 3 legged dog and currently going thru chemo therapy to prolong her life. Jumping into the back of a Chevy Suburban had it's challenges, so Kenya1, the license plate on a 1999 Subaru Legacy, is where Kenya has found it as easy to get into a car as a couch was for Barlo to lay down. 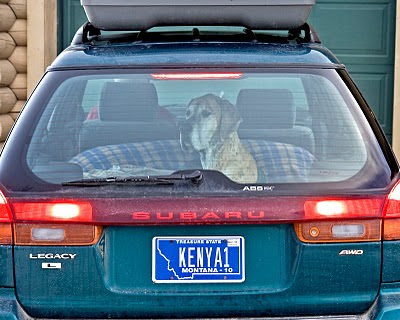 The arrival of Emma and Baxter was none too soon to put joy back in Marty's life. They are Great Dane puppies, sister and brother, and have helped us to see the brighter side of life and added a new dimension for Kenya as well. They have almost tripled in size since their arrival just 2 months ago and are at the gate to welcome visitors.(see October 11th for when they were small)

HAVE A GREAT HOLIDAY SEASON, A WONDERFUL 2100, AND COME
VISIT US IN MONTANA