The winter "get away" season has started at Chico Hot Springs and the second day of each trip is a day in Yellowstone. We woke up with a couple inches of new snow on the ground and were concerned about the travel in Yellowstone. No problem . . . . .

We had just left Gardiner on our way to Mammoth Hot Springs and then on to Lamar Valley and Cooke City when Marty said, did you see the Buffalo on that small island in the river. I said, no,
so she insisted that I turn around which I did. This is what we saw. 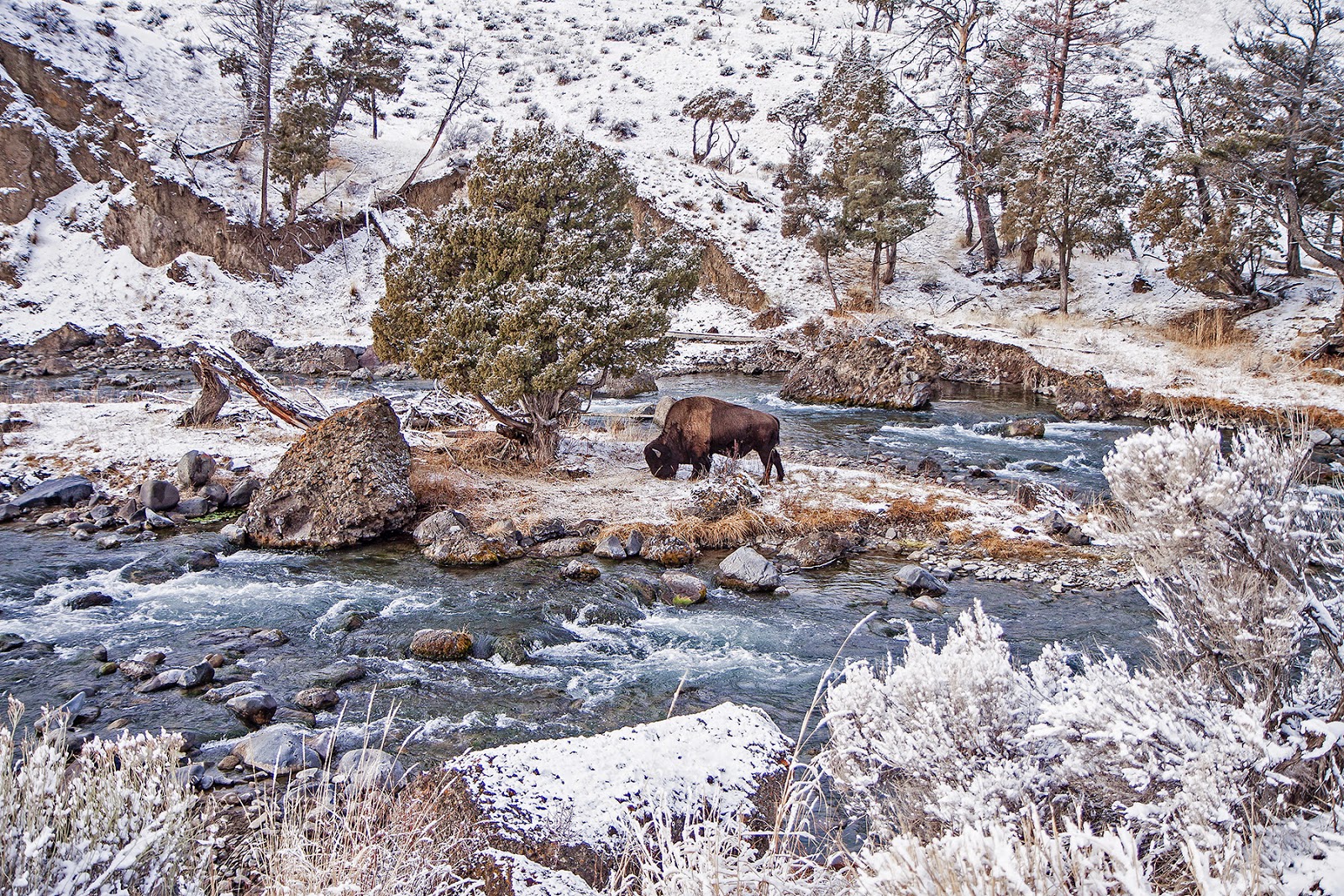 People who we have shown this photograph to have marveled at the image, one said, this looks more like a painting than a photograph. Imagine the buffalo crossing the cold water in the stream to reach this small island to graze. The snow from the night before is visible on the ground and in the vegetation.

We continued on the 50 mile trip to Cooke City, although we saw quite a few elk and lots of buffalo along the way, I didn't stop to take another picture until I saw this small gang coming toward us. I got out of the car and started taking photo's. Marty said, get behind the door of the car, that first guy looks dangerous. I said, he just wants to shake my hand. 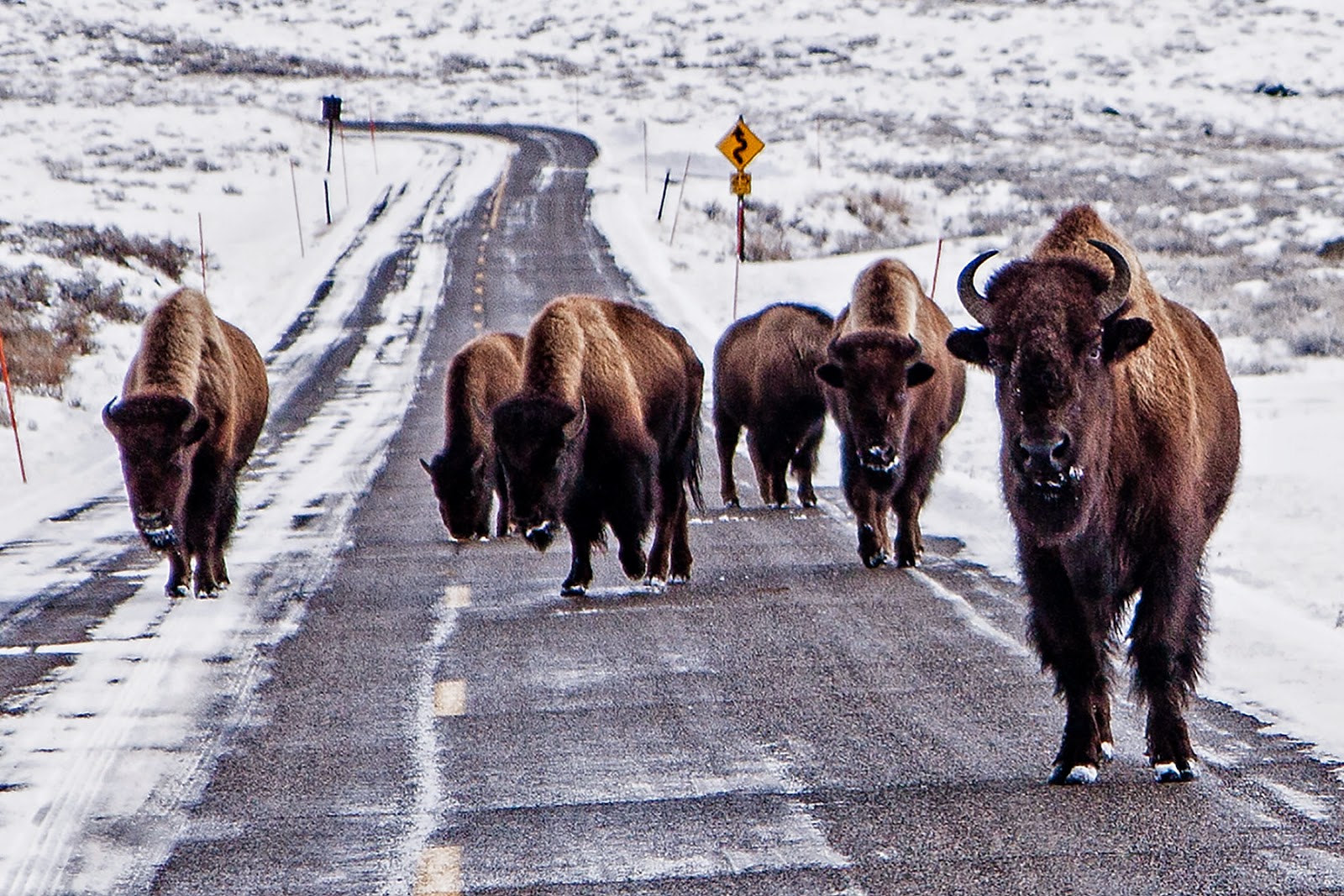 We let them pass and on to Lamar Valley, hoping to see some wolves. As we got into the area below where we know they have dens, we spotted people with camera's and binoculars. The wolves must be coming down the mountain and perhaps crossing the road. Wrong, it wasn't wolves, in fact we didn't see any wolves at all on the trip. What we saw were a lot of bighorn sheep on the side of a steep hill. Out of the car with my camera, took a lot of photos, this was our favorite. 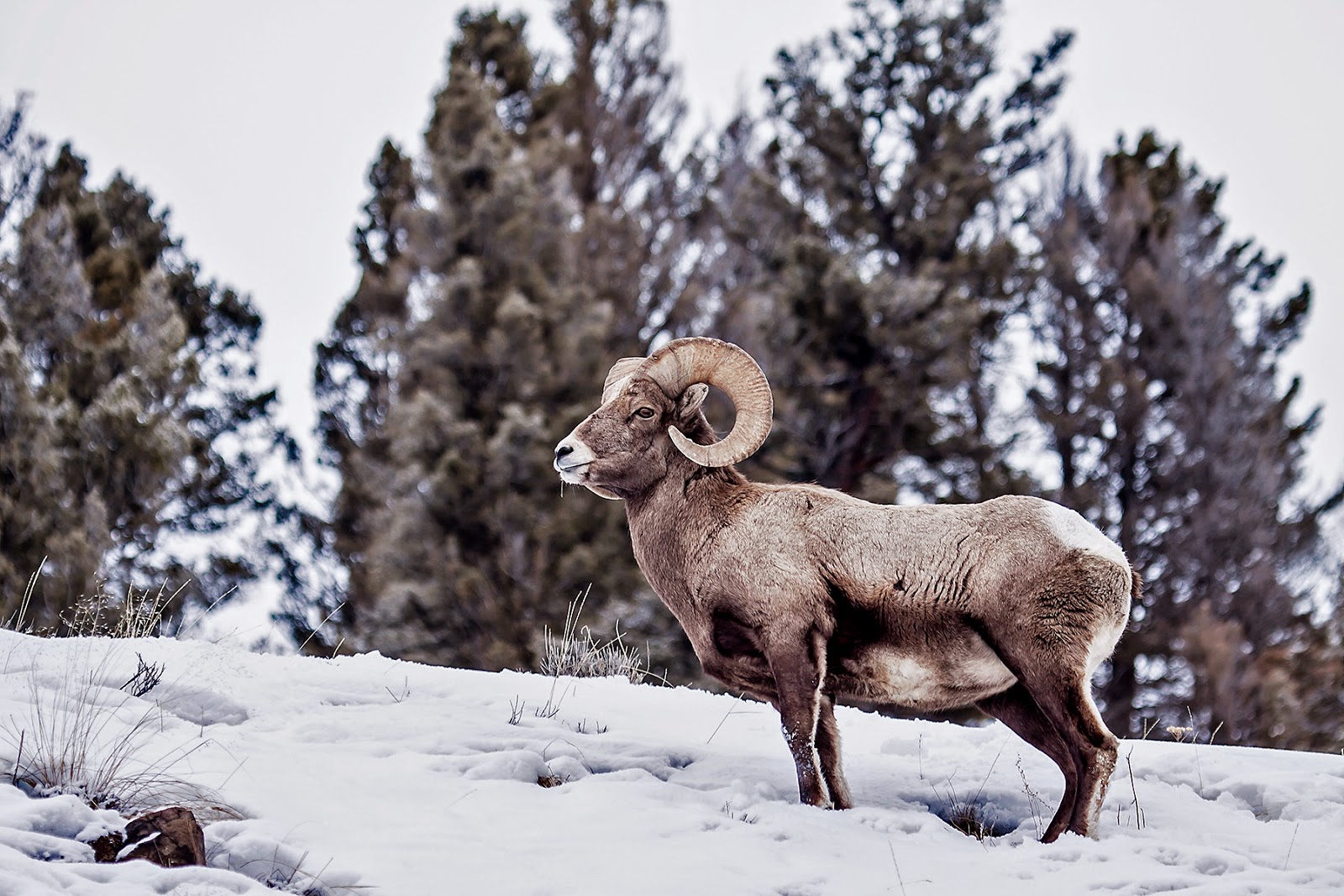 We made it to Cooke City. I was difficult to see anything but snow. There has been a lot of snow this winter and none of it has melted at an altitude of 7480 feet. There is a population of under 200 yet the city was filled with visiting snow mobiles. We turned around and headed back. As we approached the area where we had seen the bighorns, earlier,  there was huge crowd of photographers looking in the opposite direction of where the bighorn were. What were they looking at. 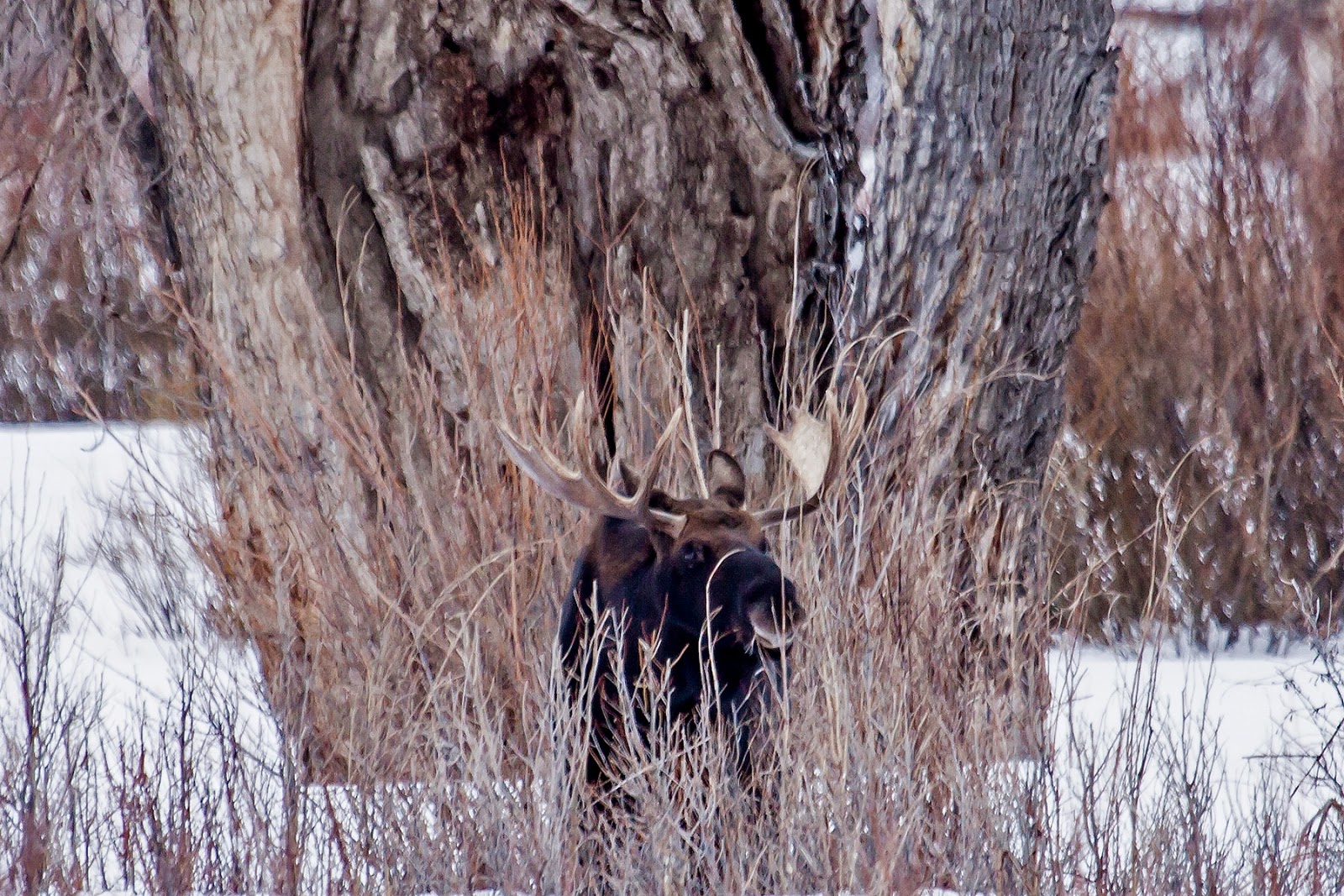 Yes, it was a large moose. I needed my best zoom lens to get this photo as it was quite a distance from the road, the snow was deep and it would have been dangerous to approach this guy. 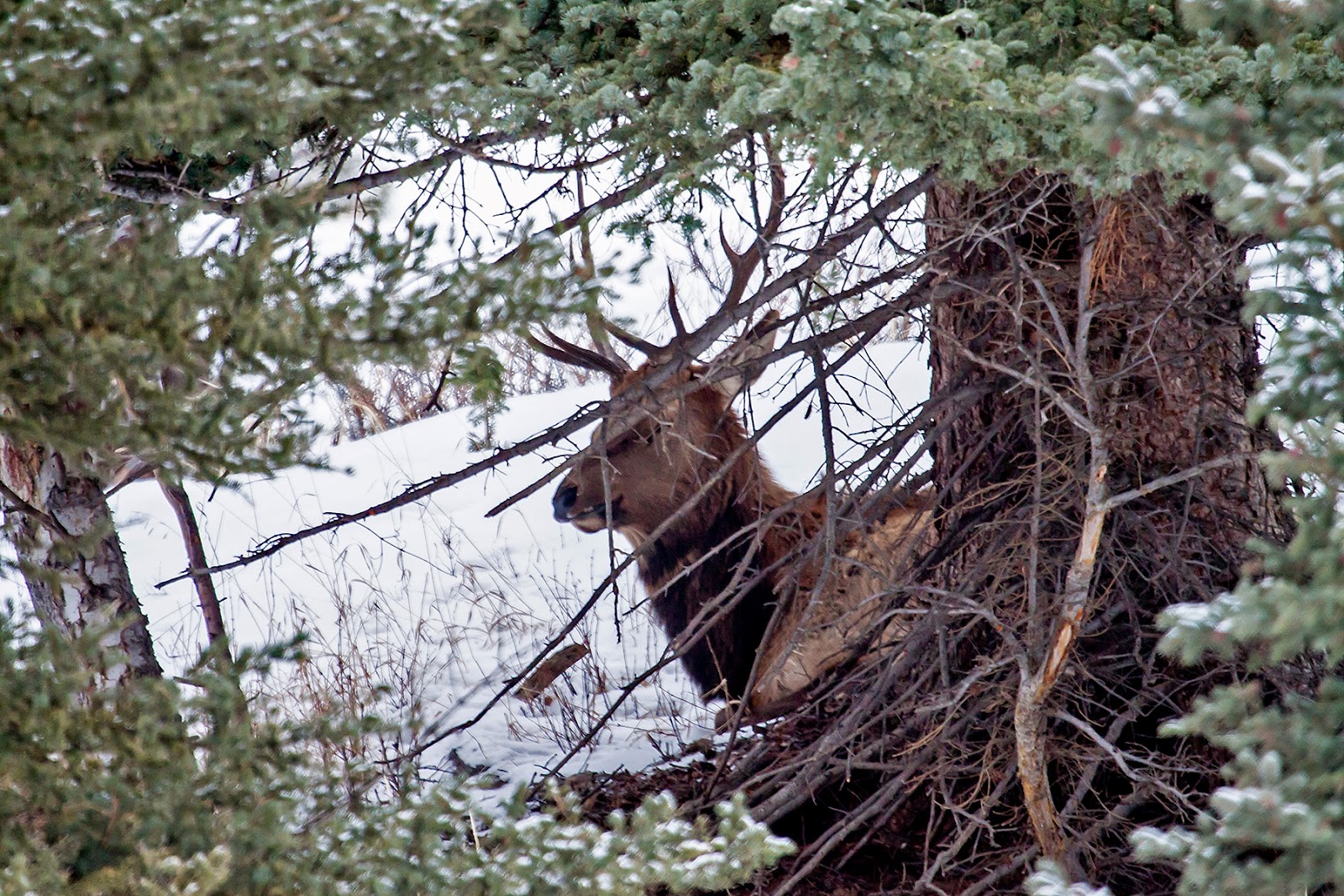 This was a great several hours in the park. In addition to these images, the park was a beautiful winter scene. We'll be back in the middle of March for another "get away".
Posted by Clint at 4:01 PM 1 comment: