What the ranchers see on the Grove Creek Rd.

Ranch life in Montana. Driving down the Grove Creek Road is always special. Will it be a cattle drive, horses in pastures, wild life, a pickup truck with a load of hay, or perhaps what I saw on this day. This is an outlyer as far as the sheep go. Most of the males are bigger than this one and most of them do not have horns. This guy was standing by the side of the road along with his girl friend. 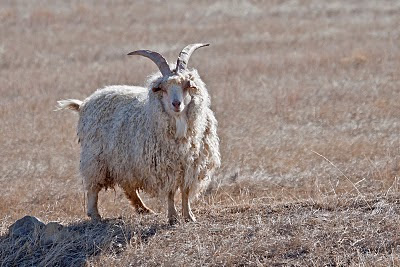 it's too early for the lambs. These 2 are fortunate that the shearers have not been to their pasture as they still have their wool to keep them warm. A significant number of the pastures you will see the sheep already shorn. These 2 may have too much wool because the shorn ones are surviving the current cold weather and snow. It will not be long before we have lambs. I did hear from one rancher that their ram (male sheep) had escaped his holding pen several months ago and that they are having a very early crop of babies. 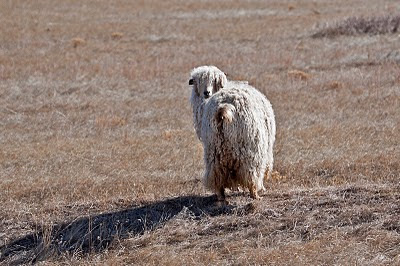 When you see one of these, you can figure that the owner has a warm spot in their heart for animals like this. They are too small to do any kind of chores unless the rancher has put them with the sheep to either be a leader or a protector. Llama's are better protectors. Most people passing them say they are cute. Almost very field you got by these days has lots of these. Calving season started in January. Some of the ranchers are done and others are just starting. If I had been about 30 minutes earlier I would have been able to show you a calf being born. Mother still has the afterbirth and this little guy got enough milk that it had to take a rest. I tried to get a picture of the nursing but mama was very protective and as I circled her hoping to get a picture with the sun on the calf, she would turn to protect her calf from me and my camera. 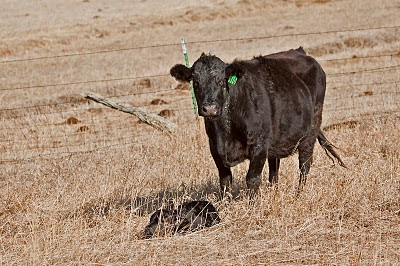 This young calf came to the fence to check me out. He's probably a week or so old. Old enough that the rancher has identified him with his own tag and he's independent enough that his mama has let him wander off on his own. He was not the 5th born, the number is the same as his mothers so the rancher can tell who belongs to whom.
Yellowstone is next week, come back soon and see if we were lucky enough to get a picture of a grizzly. They are out of hibernation. 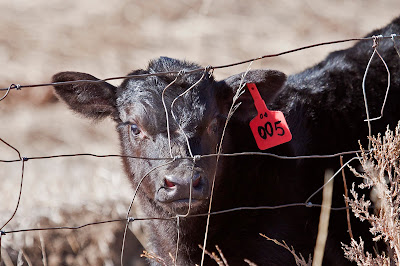