We bought snow shoes but there's not snow in Fishtail

What do you do when you purchase snow shoes for your trip to Montana and when you arrive there isn't enough snow to really use them. You can say, Oh shucks, or you look for snow. We found it. Red Lodge has had over 100 inches and the snow pack is over 40 inches. But we wanted to go to Chico Hot Springs and Red Lodge is in the wrong direction if we're going to Chico. Is there any snow in Yellowstone National Park. If there is, maybe we could take our snow shoes with us and use them there. There was snow in Yellowstone. We waited until we got to the Lamar Valley. Marty and Crissy decide to go for a hike. As you can see they were all smiles as they turned for a picture. Susan, Patrick and Clint were on the road near the car. Didn't think they would go very far. 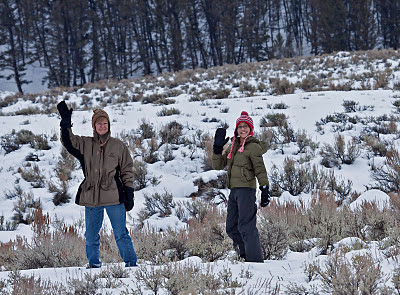 When John realized there was a packed trail, close to where the ladys were hiking, he decided to follow. As you can see, John has joined the girls and we expected them to turn around any time. 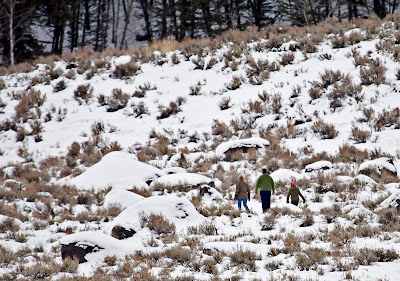 But they didn't, and all of a sudden, I remembered where they were. Were they going up the hill in the wooded area. We had been there without the snow when it was easier walking. What was up the hill was a wolf den used shortly after the wolves were reintroduced to Yellowstone in 1995. Wolf number 9 had a litter of pups in the den in the trees. So we watched and then we didn't see them anymore, they were up the hill. 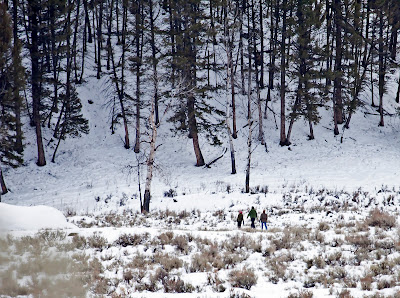 We were waiting for their return, and sure enough, here they came. It is safe where they went as there have been no wolves near the den in years. Now they are on their way back. I'll bet Crissy and John will have a story to tell about the den. 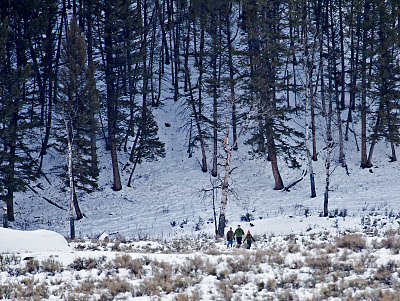 The last time Marty and I went there was with a Yellowstone Association guide, it was in the spring and the round trip took over an hour. When they get back, I'll bet they are tired. 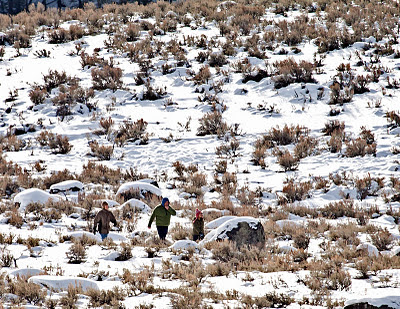 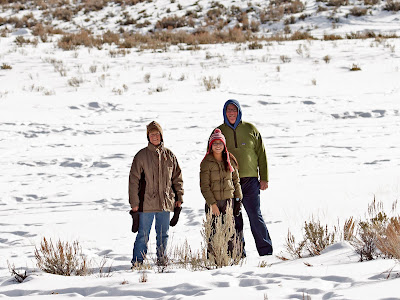 and now they are back. What an experience and the snow shoes worked. It was after noon, we were at least an hour away from Cooke City and everyone was hungry. You'll have to come back again soon to view the "wild critters" we saw in Yellowstone. Oh yes, we had dinner at Chico last night and will return for another great dinner later in the day.
Posted by Clint at 12:08 PM No comments:

Email ThisBlogThis!Share to TwitterShare to FacebookShare to Pinterest
Labels: a great hike, a hike to wolf den, Lamar Valley, new shoes shoes, no snow in Fishtail, the McCarthys

Circle B Bar T: Christmas in Montana
Posted by Clint at 12:17 PM No comments:

Our daughter, Susan, and the McCarthy family have been visiting Montana in the summer for a long time. One of their dreams has been to spend Christmas with us. This was the year. They arrived on the 22nd. On the 23rd we visited one of our neighbors and selected a tree to appear in our home, once decorated, it would host the Christmas presents. The tree was cut down and decorated. On the 24th we got ready for the big event. The 25th was not only Christmas but was granddaughter Crissys birthday. What a day. After the Christmas presents were opened, we decided to take a drive. We headed toward the Beartooth Mountains and the Woodbine Trailhead. As we neared our destination, we came across a herd of Bighorn sheep. 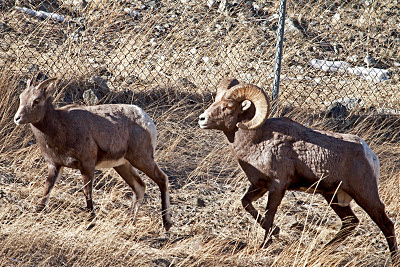 As you can tell from the picture, it was the season to be with your loved one and perhaps in a loving way. We will have to return in the spring to see. We arrived at Woodbine. The water was mostly frozen and many of the rocks and ledges that are covered with water in the spring and summer, were bare. Crissy ventured out on a large rock, just below the trail. You can see the frozen stream in the background. 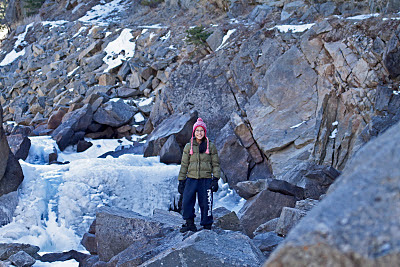 We traveled on down the trailhead. Susan, husband John, daughter Crissy, and son Patrick posed for a winter picture in Montana. This photograph will bring back many memories, some of which you will see on a future blog as we travel to Yellowstone National Park. 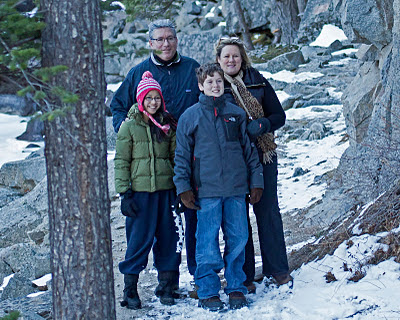 Yes, on this day, it was colder than in Westport, CT. Before they returned we did get warmer weather and most of our snow either melted or was blown away. If you have been to Montana, you get very accustomed to seeing deer in the pastures. One of the other wildlife sightings is of the "golden eagle". That was true on the 25th as well as this one was perched above the Stillwater River looking for a fish for dinner. 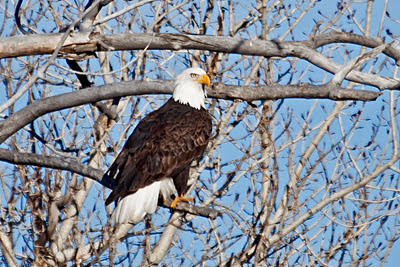 What do you do in Yellowstone in the winter? What wildlife can you see there? We will have an update on that part of the Holiday Season, soon. We had a great time over the span of 8 days that Susan and the family were here and look forward to their next visit.
Yes, when we got back to the ranch, we celebrated Crissy's 15th birthday.
Posted by Clint at 11:38 AM No comments: