Marty and I needed a break, so off to Chico Hot Springs and 2 days in Yellowstone. Chico was wonderful as usual and Yellowstone was wintery, snowy, and no wolves close enough for a photograph as we drove from the Northwest entrance to Cooke City and back. The yield of photographs that made it to the blog was about 3%. What you are about to see does represent each of the species that we saw.

We saw coyotes from the minute we entered the park until we left. Not an abundance but they were there. If we had experienced more sun and less snow we would most likely have seen more. We followed this one across a large area in the Lamar Valley when it decided to take a rest. 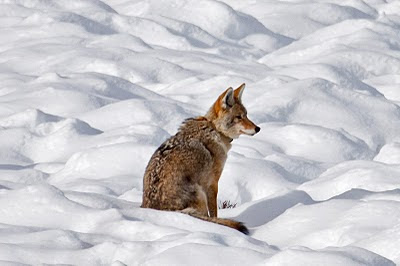 Every where you looked there were bison. If you need a photograph of a bison, let me know, name the pose, and we'll have it on it's way to you. This was our favorite. Unlike many we saw who were exhausted from digging thru the snow for something to eat, this one seemed to know where it was going - it had been digging in the snow evidenced by the snow on it's body. 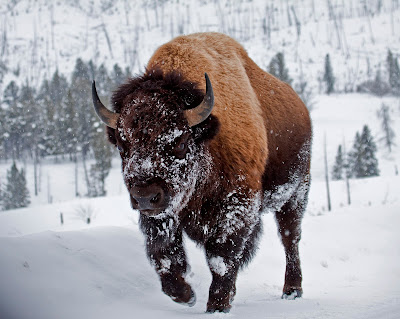 This fox did find the sun on the top of a large rock and was enjoying the sun and perhaps a rest from having to travel through very deep snow. 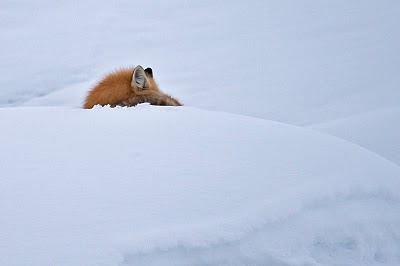 This bighorn ram was with several of his buddies near the Soda Butte. He raised his head out of the snow long enough for me to take this photograph, then back to work. 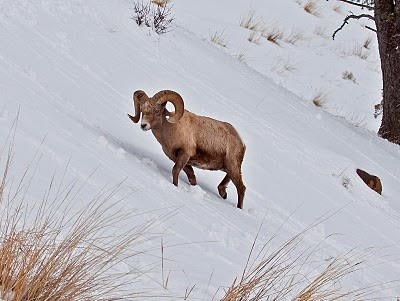 The elk population in Yellowstone is at it's lowest for a number of years. The wolves that were re-introduced have been the major factor in causing this decline in the numbers. When we first saw this gentleman he was eating twigs, not a hearty meal. When we returned he was resting. Not sure if it was because of the chore digesting the twigs or the effort it took to get his belly full. He was one of the few elk we saw. Nice rack. 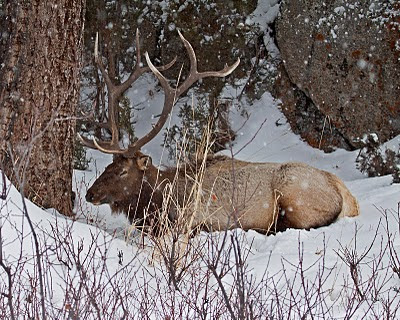 I've saved this photograph for last. After seeing the impact of the winter on Yellowstone, the last place you would have expected to see ducks swimming in the river was here. I got some pictures while sitting in the car, I didn't seem to be bothering them. We saw at least 15 of them while we were stopped. Then I decided to get out of the car for some close ups. They voted not to stay, however, I did get this one on the move before they were all gone. 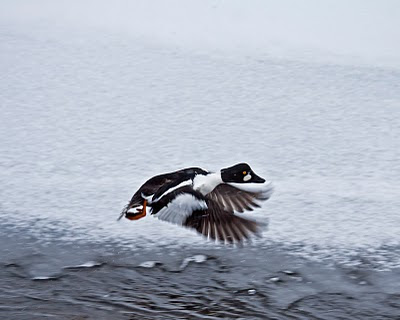 We'll probably return in the next 6 to 8 weeks. By that time we may get to see a few of the bears who have had enough hibernation.
Posted by Clint at 2:31 PM No comments: