Young Robins at the Circle B Bar T

If you have been watching the blog, you are aware that there are robin's on the Circle B Bar T. To date you have observed mature birds as they are found around the ranch and in our trees. There have always been nests, eggs, and babies around the house, but I have never taken the time to capture them before they flew away. That changed when I observed two nests. One which was a pair of young ones who will be flying away very soon. 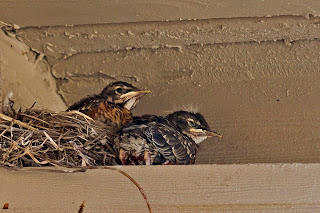 Here they are, sitting in their nest. The grown ups are still responsible for their food but you can tell by their size, it will not be long before they test their wings. 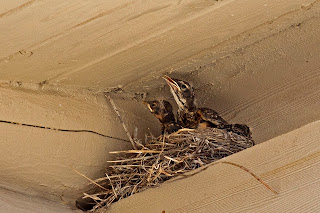 This is the same two, they are not as relaxed as in the prior photo. I'm not sure if they are testing their voice boxes, telling the adults that it's time for more food or maybe a stretch just before they take off. It's 25 feet to the ground, so they must be strong before they make their first flight. 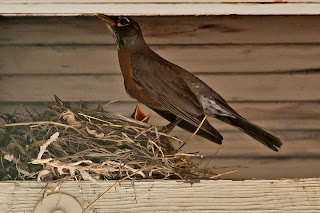 I was sitting in the family room, watching television, when I saw a nest under the deck. As I watched there were 4 heads popping up, mouths open and perhaps calling for food. As I watched, an adult would arrive and feed them and fly away. Initially, I thought the adult was the same robin, but when one departed and another arrived, I was able to determine it was pair who where minding the nest. I did want to spook the adults so I used my zoom lens from afar to capture the above image. 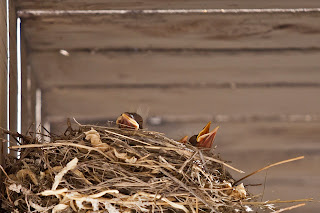 When the adults were away from the nest, I got closer and got these 2, peering out of the next in hopes that they could see more food on the way. You ask, what were they being fed? I'm not sure - - - - but sometimes it was a mouth full and other times it appears like it might have been just enough for one mouth. As I was doing the photography, I was able to find this blackbird, perched on a fence post with something in it's mouth. 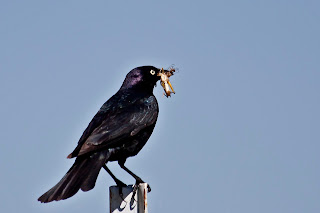 A close observation indicated it was a grasshopper. I have not seen enough blackbirds to control the grasshopper population, but I'm sure whoever is being fed these morsels, they will not starve. Hopefully
I can keep you updated with the maturity of these young robins.
Posted by Clint at 11:20 AM No comments: