People have asked over the years, who manages the Circle B Bar T ranch. For those of you who don't know, it's a quiet kind of creature that is normally in the "great room" when we have company. He looks like a Montana rancher with his plaid shirt, his alligator boots, a bandana around his neck, a nice vest, and of course his cowboy hat. If you look carefully, you'll find his only vice is his corn cob pipe which most often is in the left pocket of his vest. He found out that his eye sight is deteriorating about 2 year later than Clint's and usually wears Clint's used trifocals.

He came from Texas about the time that Marty and Clint moved to Montana. Good friends of theirs, Dick Kane and Gretchen McBeath located him and arranged for his trip to Montana. There are a couple of poses of Vern that were taken recently. The first one was on Barlo's new couch. Vern insisted that he check it out and in fact spent a night sleeping with Barlo. Vern gave Marty and Clint a thumbs up and the couch stayed. 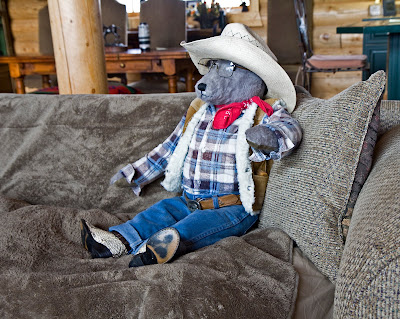 Marty helped Vern write a note to his mother, shortly after his arrival. The response which was received from Texas is filed in our archives. We got it out to share with you.

Dear Vern;
Since your brothers seldom write, you can image how thrilled I was to hear from you. I always knew you could do anything you put your mind to. Just remember, always be honest and hard working and don't let your job go to your head.
Your family sounds like my kind of people. I would love to get to the Big Sky country some day to meet them in person.
I'm putting together a family album for you but it will take awhile. Your Uncle Larry and I have been busy volunteering at the Therapuctic Assisted Riding Center. It is very exciting for me to work around horses again (Uncle Larry spends his time cleaning tack)
Well son, as your Dad used to say, "Keep Sweet", write when you can.
Much love, MOM

You now know why Vern is such a special character at the Circle B Bar T. He is shown in the next picture getting prepared for the day ahead of him. He has Clint post updates on the digital picture so that he can view what is happening and doesn't have to leave the warmth of the house, at least in the winter. His favorite prop for his left arm, is a pillow that Marty had made with a picture of Clint riding his goat when he was a youngster at the Brookfield Farm in Ashville , Ohio. The picture on the screen is a look at the south pasture next to the Grove Creek. Based on this image, Vern has told Marty and Clint to be sure the horses get an extra bale of hay today and they should have access to the indoor arena tonight. 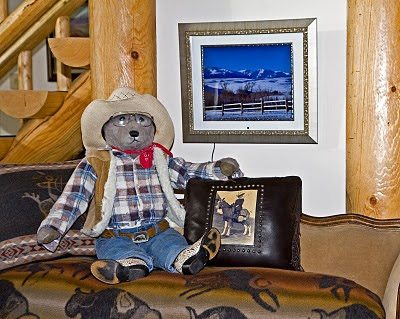 Be sure and say Hi to Vern on your next visit to the Circle B Bar T. He asked that I remind Dick and Gretchen that it has been several years since they visited and when they were last in Fishtail, they promised to return with one of their lady friends. Vern does get along with Barlo and Kenya but has looked forward to that special visit from Dick and Gretchen and their friend who they promised Vern would be alot of fun.
Posted by Clint at 1:15 PM 1 comment:

Sunday morning at the Circle B Bar T

The sun was shining, the wind wasn't blowing 25 mph, the temperature was in the 30's, the horses and dogs have had their breakfast, let's go to the barn and put the horses in the pasture and take them some hay. Whoa, what is that? 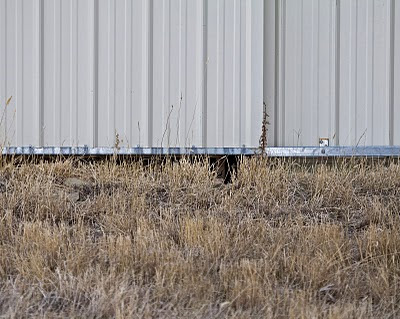 I know you can see it, but can you smell it. A skunk has crawled under the barn door and is hiding under the hay. The smell is terrible. Don't let the dogs near there, I'll get the hay and Marty you let the horses out. You can see the snow is mostly gone, the ground is either still frozen in places or muddy in others, so I'll take the hay out in the pasture where there isn't any mud. 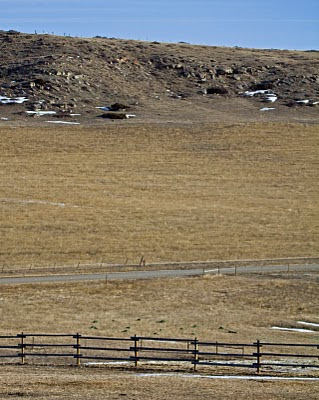 Almost every morning we take the dogs for a walk and get our exercise, so lets head down toward the Grove Creek. Marty and Kenya posed as we headed south. We walked this way today for a couple of reasons. The horses were on the north side of the property and I wanted to see if the owl was in it's nest. The picture that I posted on the blog several days ago, ended up framed and donated to the Beartooth Stockgrowers for their auction which is held during their annual meeting and dinner dance, which Marty and I attended last nite. I wanted to tell the owl that it had become famous as it's picture was shown to the crowd and then sold for $170. I was hoping it would be waiting to hear the news. As we headed toward the Grove Creek, we looked back and guess what, the horses had decided that the pasture east of the barn had enough grass that they didn't need to graze on the hay that I had just delivered. 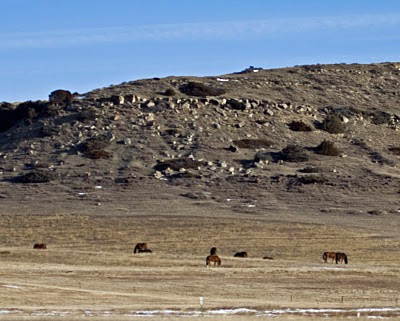 and on the way to the owl tree, I observed a wagon wheel, half buried in the ground. I have probably tripped over it a number of times, but this morning I stopped to capture the image. We have owned the Circle B Bar T for almost 20 years, the wagon wheel has been here for at least that long. It's near the creek, not in the field where we bale the hay, so it has survived Clint's clean up activities. 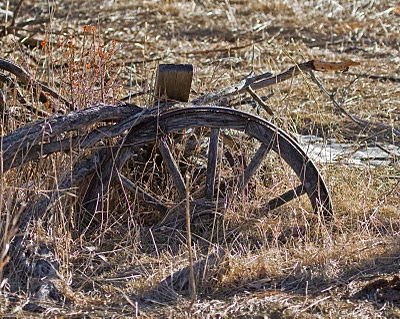 Is the owl in the tree? Yes, there it is, you can tell it's armer if you compare this picture with the ones I have taken earlier. It's not all hunkered down trying to stay warm or is it just listening to me as I tell it that it has become famous. If you look closely, you'll also notice that the eyes are slightly open. 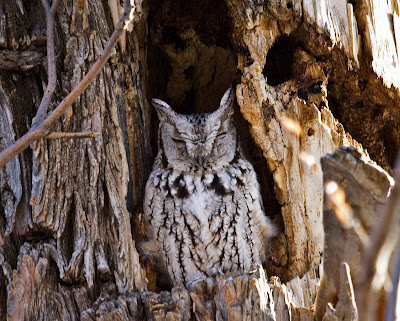 We headed back to the house, got the Billings Gazette, and had breakfast.