Another bear story from Yellowstone

Reading the paper or watching the news on TV recently, you have become aware of several bear stories from Yellowstone National Park. One was tragic with a man losing his life to a female grizzly with cubs. Another was a reporter wanting to do a story with one of the Yellowstone staff to inform the public about bears. Although the reporter got an article and pictures, the employee was not anticipating the bear to be so close and ended up swimming across a pond to avoid the bear. For the full story, go to: http://kaaltv.com/article/stories/S2194268.shtml?cat=10226
Yellowstone National Park can be exciting with the wild life and at the same time can be very dangerous at times. The following are pictures and a personal experience I had on my most recent trip to Yellowstone. As we traveled toward Cooke City having just left the Lamar Valley, we noticed a crowd along the road and stopped to see what had their attention. Sure enough, it was a bear, a black bear. Before you start worrying about me and the crowd and our safety, let me assure you that these photographs would not have been possible without a 400mm lens and some significant enlarging of the digital image. Many of the crowd had either spotting scopes or binoculars. So here is the bear, standing beside a large tree, and it appears it was sniffing a flower in the field. 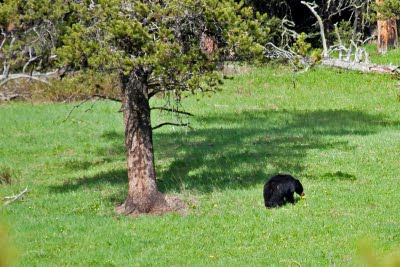 The next photograph was a surprise. Many of us thought it was a wolf but when I enlarged the image I knew it was a coyote. So you ask, was this at the same time you were watching the bear. The answer is yes. Well, where is the bear? If you look at some of the branches and the tree you will see that it was the same place, the same tree, and you'll have to accept the fact that it was the same time. 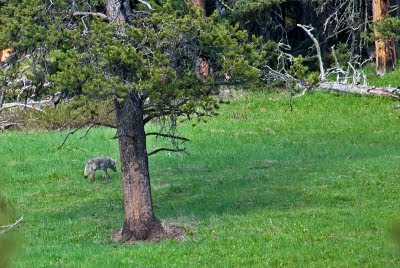 So I started looking around, Where did the bear go. 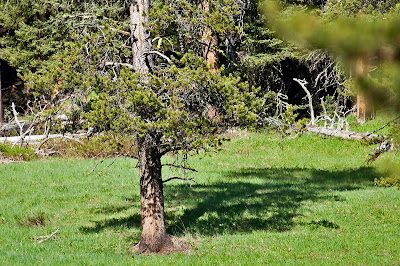 At this very moment, there was no coyote and there was no bear. The next photograph tells the rest of the story. Look carefully at the tree. Start at the ground and look up the trunk. 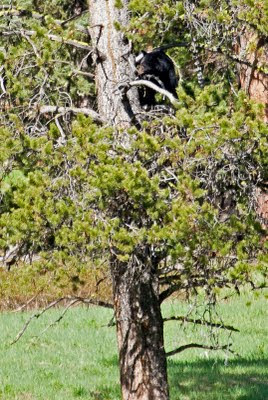 Yes, that is the bear. While we were watching the bear, we saw it run to the tree and climbed to a spot where we could not see it initially. Then the coyote appeared, and it was obvious that the bear did not want to share the space with the coyote and moved to higher grounds. At times the coyote was in the brush and at other times it was under the tree. The bear was content to stay in the tree and ultimately started moving around to a spot where I could get this photograph.

Having been to Yellowstone many times, having watched video's of bears in the wilderness and in Yellowstone, having observed their aggressive behavior, it was difficult for me to believe that the coyote chased the bear up the tree. However, in there we no other predators to be seen and no other reason for the bear to climb the tree.

Add this to your bear stories.