Surprises as I approached the Grove Creek

Every year I have observed female deer along the Grove Creek, which is south of our home. They have  fawns in the late spring and I watch them with my telescope as they graze in the pastures near the creek. With my telescope I have been able to determine the female is nursing based on the size of her utter. This is a photograph I took of one of the females from our deck with 400mm zoom lens. 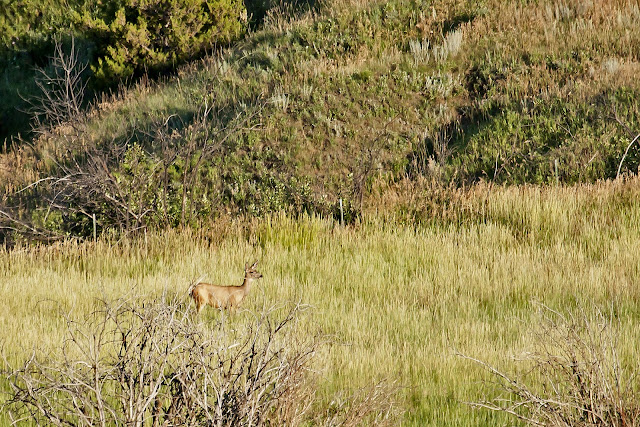 I purposely avoid getting near them as the fawns are young to avoid scaring them and perhaps getting them injured. However, I said, now is the time to take my camera and get a close up of the fawns. I head toward the creek and all of a sudden, the first surprise. Ahead of me along the fence was a small yellow and black bird. I had not seen these before, so I had to take some photographs. This was the first one I captured. 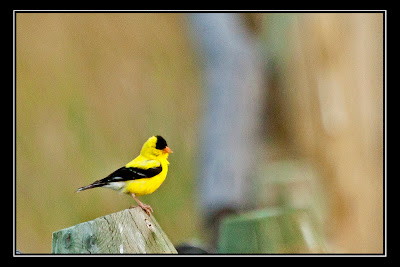 It was a goldfinch. When I got back to the house, I learned that this little bird sheds these beautiful colors in the winter time. I had seen them in their winter colors around the barn but didn't know what they were. They left the fence and were flying around in the pasture, when I captured this image of one of them perched on this old sunflower. 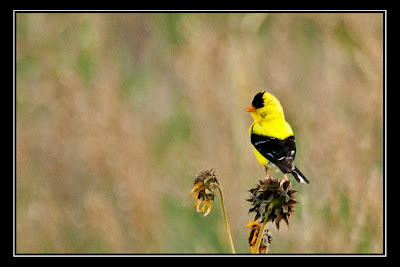 So on to the creek. As I get closer, I seen two fawns. It must be another deers baby. I am getting closer and no long need the zoom lens to see the fawns. Now there are three fawns and I was guessing that the female that was near, must be in charge of the babies. This is the photo I took the the group. 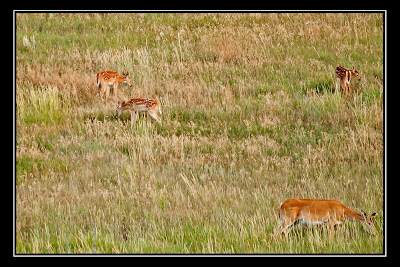 Mother is in the lower right of the photo and the fawns are at the top. Now for the surprise. As I got closer, mother became alarmed and must have alerted the fawns, as they all took off together. Surprise - this mother must of had triplets as the entire entourage headed over the nearby hill and were gone. If these babies belonged to someone else, they would have headed to where their mother was. As they followed this mother, I gave her the nod as being the mother of all three.
Posted by Clint at 5:00 PM No comments:

It was only 25 years ago that Clint was joined by his mother, his three children -  Susan, Jeff, and Jennifer, Jeff's wife Nadine, and the photographer, Clint's wife Marty. It was a great celebration and surely no one at this time would have guessed that the 25th Anniversary of this event would be held at Montana Jack's in Dean, Montana. 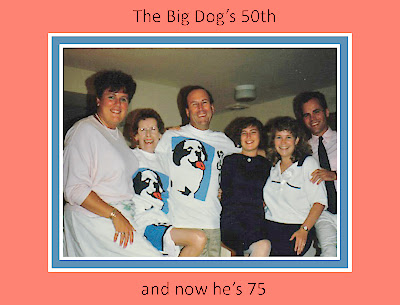 The living participants from above were in Westport, CT, Boulder, Co, and Columbus, Oh while the crowd at Jack's sang Happy Birthday to Clint and enjoyed the food and the toasts. This is what the birthday boy looks like 25 years later as he is accompanied by his wife Marty. The photographer was Dana Teegardin from Georgia who was visiting with her daughter and enjoying the horses. 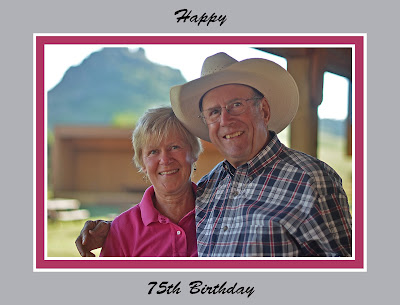 As the wine glasses were raised and a toast to the birthday, Clint invited everyone in attendance to the next 25 year celebration when he will be 100.  So as you read this blog, mark it down on your calendar for July 7, 2038 that you have been invited to Clint's century birthday.


A FUN TIME WAS HAD BY ALL.