Goodbye Sammy, We all loved you

On June 19, 2010 our first born, Alakhazam, aka Sammy Da Bam Bam, left the Circle B Bar T, to live a life free of pain and join her wonderful Circle B Bar T sire, Alsaan, aka, Al dude. This is Sammy with her sire and dam Khalli when Sammy was quite young. 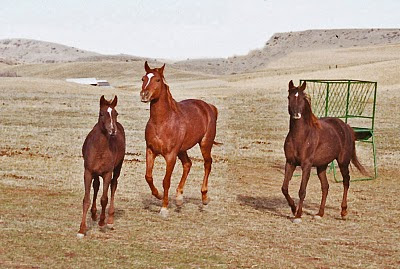 At the age of 2 Sammy had become a Jr. Champion at her first show only to suffer a life-altering injury shortly thereafter. Thanks to the heroic and dedicated efforts of our veterinarians, she lived a full life with a somewhat compromised back leg until the inevitable laminitis, ulcers, and colic crept up on her. The next picture was Sammy in the pasture before her first show. 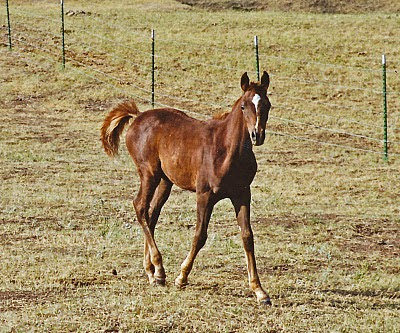 In her years at the Circle B Bar T, she became the grandchildren's favorite. She taught most of them to ride, she was the first horse love of many and gave our grandaughter Crissy her first gallop, she saved Crissy when the bridle broke and held on to the bit so Crissy could continue the ride that day. She is pictured below with Crissy and Marty at the Region 6 Championship in Gillette where they performed in the "lead line class".
She taught us all so much about living life to its fullest and never complaining about the challenges she faced. Whether is was showing off as she posed for this picture with Marty in the saddle and the Beartooth Mountains in the background, 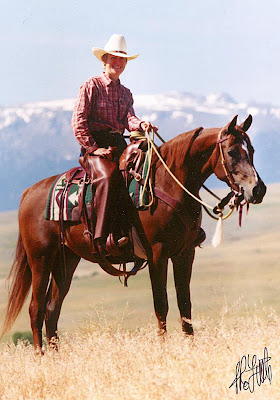 Or her favorite smile after sipping on someone's soda, or trying to get your attention as shown in the pose that most remember by . . . . . 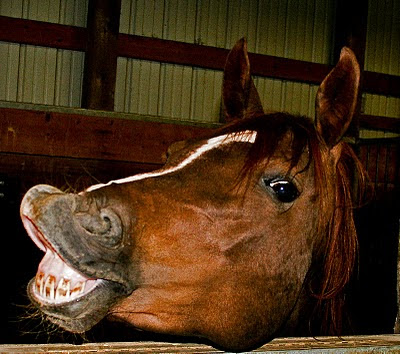 8 days after she passed away, one of her best friends, BBT Majestic Sapphire, was confirmed in foal to "Kordalis". We choose to believe that Sammy galloped to the gates of heaven, turned in her weary body, and flew her sould back to the Circle B Bar T to Sapphire. We now anxiously await, "Sam I Am", Rest in Peace, Sammy.
A special ceremony was held in honor of Sammy when the entire family, both young and old assembled at her grave to say a last goodbye. 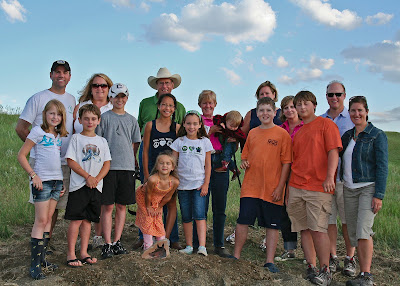