Marty and I left for our daily walk through the pastures with Kenya and Barlo today. We decided to head toward the Grove Creek and see if the "wise ole owl" was in it's home in the old tree trunk. Unfortunately it was not there, but the dogs did cross the creek with us and were soon off on a venture of their own. I had noticed a few days ago that there was a carcass in the nearby field and Kenya was off to check out the bones and Barlo found the hide close by. We called, asking them to join us as we returned to the house. It was a difficult task to get them to come, and as they arrived we noticed that Barlo had claimed the hide as his own. It was too cold to have my camera with me, but this is what we saw coming through the bushes down by the creek. 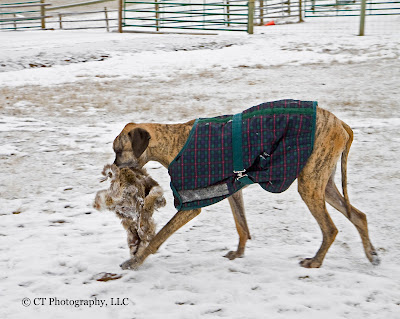 This is all that we saw for the 1/2 mile trip back to the house. Usually, Barlo is lagging behind with Kenya in the lead. Not today, Barlo was proud of his trophy and was in a hurry to get to the house. Marty and I suspected that he probably had a place near the house or barn where he wanted to hide his hide. For a dog that has been crippled for the last year, he was moving at a very rapid pace and showed no signs of his debilitation. When we all got in the yard, Barlo got to examine his prize. 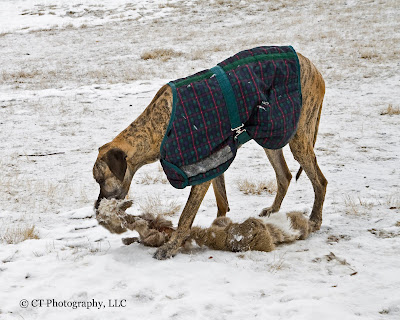 As you can see, it was quite large, in fact the hide and the bone pile looked like the deer was at least as large as Barlo. This was his and it wasn't until later that we realized how special it was to him. However, dogs have a language of their own, and you can tell by this next picture that Kenya was curious but knew this was not hers to share. 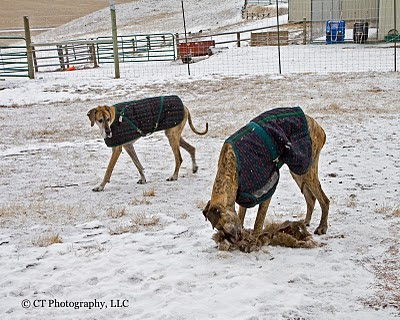 Now it was time for Barlo to determine if there were any morsels still attached to the hide. Sure enough there were and he was having a very enjoyable time until Marty observed his actions. Her direction was to take the hide away from him. I mentioned that it wasn't fair, especially after all of the work it took for him to get it to the house. 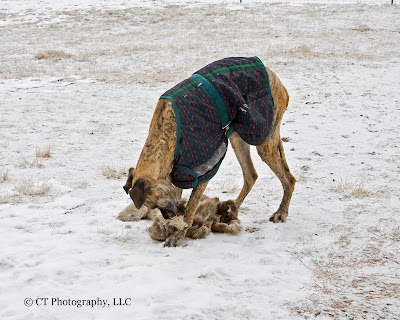 Marty approached Barlo to take his prize to the barn, so that later in the day, he could re-visit his trophy and at least she would have some indication by then if the snacks he was enjoying would have created a disturbance in his stomach. As she approached him, she discovered from the loud growl that it was off limits to her as well. Ultimately, Marty prevailed and the hide was taken to the barn while Barlo entered the house for a nap.

WHAT A HAPPY DOG HE IS TODAY
Posted by Clint at 1:08 PM No comments:

A football player in the family

Based on his size, we have an up and coming lineman. Number 56 of the Wreckers has started his career in Westport, CT. Patrick McCarthy is his name, and playing football is his fame. We have added a couple of his pictures which tells the entire story. The first part, he enjoys the sport and looks forward to practice and playing in the fall. 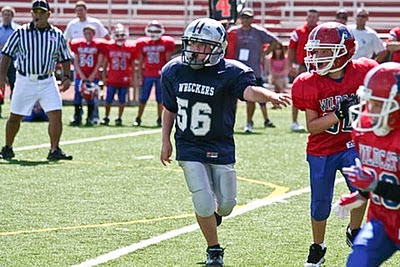 and when he isn't playing, he's watching. 2010 started with a great time and total excitement at the McCarthy home, when his favorite, Ohio State Buckeye's won the Rose Bowl game. Soon thereafter he and his father went to New York City to watch the NFL Today. After the show, he was invited on stage with his father for a picture with football celebrities and the show host. 11 year old Patrick is the person on the left in the picture, check out the size of this young man. Also, note his shirt. Jim Tressell, coach of the Ohio State football team would be proud . Patrick was not only bragging, but he also would like to be a Buckeye someday. His father, John, is the person on the right on the back row. 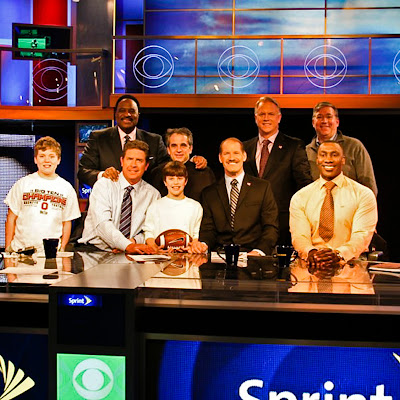 GO PATRICK, GO BUCKS
Posted by Clint at 11:25 AM No comments: