We saw it all except a moose

We spent 2 days in Yellowstone National Park between Christmas and New Years. We saw it all except for a moose. No, we didn't see any bears because they are hibernating. We drove to Cooke City the first day and made it across Lamar Valley before returning to Gardiner on the second day. As we drove across Lamar we saw lots of bison and then we spotted this coyote in the valley. We thought he was looking for dinner and the next photograph proves the point. 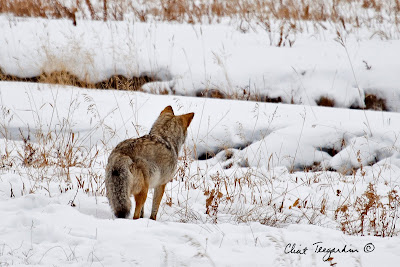 The coyote had that alert look. We had seen this for several minutes when we captured this view. The very next photograph captured the action. 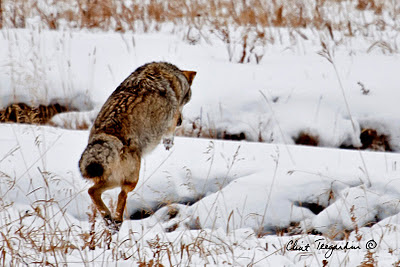 The coyote is in the air, diving into the snow for dinner. We were too far away to see if the dive was sucessful, but based on the actions after the jump, we guessed it got something. With our spotting scope and a close examination of the body of this coyote, we believe it was a female and it was pregnant. You are probably saying, you had to take coyotes because you didn't see any wolves. Wrong. 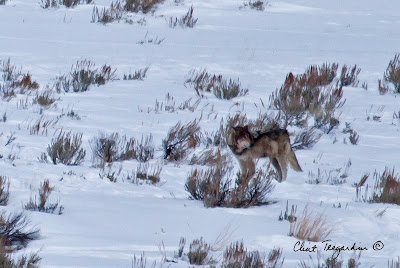 This was one of 3 wolves we saw. We learned that the pack that we have published in our blog before were on the other side of the mountain with a large carcass. The first day they were eating and the second day they were resting. If you have viewed our blog recently, you will have seen a bighorn ram courting his girl friend as we ventured to Woodbine on Christmas day. Well, this is not the same couple, but you can tell from the look on their faces that they are mates. It was snowing as we took this picture, near the northeast entrance to Yellowstone. 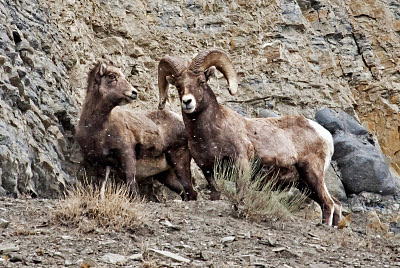 The bighorns come to the lower elevations in the winter. You will normally see some of the bighorn rams as you enter the park. This time we were leaving the park on the second day when this gentleman posed for us. We were impressed, hope you are also. 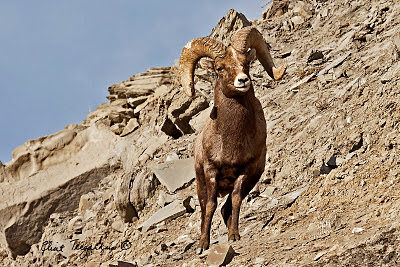 And speaking of big horns, the next 2 guys would not be pleased that we referred to the growth on their heads as horns, they are antlers. We had seen alot of female elk but the boys were not to be found until we rounded a corner and what should appear. They were resting. 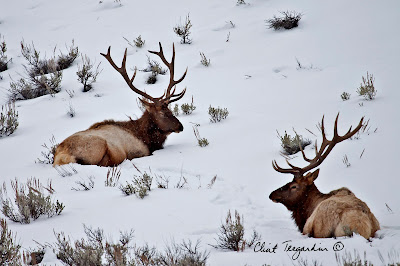 We also saw pronghorns. Two great days in Yellowstone, as it always is.
Posted by Clint at 2:40 PM